How to be Financially Disciplined! 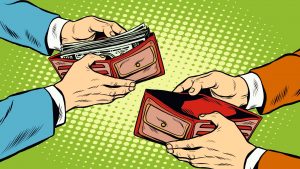 No excessiveness, nor penny-pinching

A faithful Muslim should do his best to control and balance his financial activities and make them all go in conformity with shari’ah-based obligations and ordinances. The best way to do this and to make sure that one is not trespassing the boundaries of Allah is: to scrutinize one’s earnings and make sure that they are all of lawful sources; to be moderate in terms of spending; to fulfill one’s obligations and give others their due rights; to pay off one’s due debts willingly and beautifully.

Balancing as well as controlling one’s financial activities have become significantly important as there are many common negative financial transactions and commercial activities that may lead to the destruction of all senses of trust and brotherhood among individuals and groups alike. In a similar vein, controlling and verifying one’s financial activities is considered as a real indicator and measurement of his/her fairness and integrity. It was reported that Caliph Umar ibn Al-Khattab once commented on a man’s praise for another as he wondered as saying to him: “Maybe you saw him while he was prolonging his bowing and prostration in prayer!” The man replied: “Yes I did.” Umar asked: “Have you dealt with him with dirham and dinar?” (i.e., were there any financial transactions or commercial activities between the two of you?!) The man replied: “No, I haven’t.” Umar concluded: “Then, you do not really know him!”

Allah the Almighty ordains upon us and enjoins us, all of us, to be fair and to control and balance all our financial transactions and commercial activities. He (Glory be His) says in His Ever-Glorious Qur’an what may mean,

“O you who have believed, when you contract a debt for a specified term, write it down.” (Al-Baqarah 2: 282)

In a similar vein, Allah the Almighty warns us against betraying or breaking our trust. He (Glory be His) says in His Ever-Glorious Qur’an what may mean,

“O you who have believed, do not betray Allah and the Messenger or betray your trusts while you know [the consequence].” (Al-Anfal 8: 27)

Some manifestations of financial discipline:

A faithful Muslim should be neither spendthrift nor mean or penny-pinching. Instead, one should always be moderate and fair in all his dealings with others including one’s own family and even with himself. Allah the Almighty says in His Ever-Glorious Qur’an what may mean,

“And [they are] those who, when they spend, do so not excessively or sparingly but are ever, between that, [justly] moderate.” (Al-Furqan 25: 67)

A real and faithful Muslim should flee from and avoid running into debts. He should plan for his life and should live by what he already has. A real and faithful Muslim does not run into debts merely for obtaining luxuries; he resorts to debts only in times of absolute necessity and/or dire need. He does not like the accumulation of wealth and riches but earns what may suffice him and nothing more. A real and faithful Muslim is always keen to pay off his debts – if any – as soon as possible as he aspires to meet Allah the Almighty after death while he is as pure as a sunshine (with no debts whatsoever). ‘Abdullah ibn ‘Amr ibn Al-‘As (May Allah be pleased with them both) said: The Messenger of Allah (Peace and blessings be upon him) said, “Allah forgives every sin of a martyr, except his debt.” (Sahih Muslim)

Another narration in Sahih Muslim reads: The Messenger of Allah (Peace and blessings be upon him) said, “Being martyred in the Cause of Allah expiates for everything, except debt.” (Sahih Muslim)

When Prophet Muhammad (Peace and blessings be upon him) was sent down by Allah the Almighty to guide all humanity to the way of truth and the straight path of true faith, the Arabs of his time had many sorts of financial transactions and commercial activities. They had several sorts of buying, selling and trading among themselves and with others. Many of these financial transactions and commercial activities were not shari’ah compliant or fair; therefore, the Prophet (Peace and blessings be upon him) announced all such activities as unlawful as per Islamic shari’ah (i.e., the regulations of Islamic Law). As for those transactions that were fair and shari’ah compliant, the Prophet endorsed and approved them all. He was ordered by Allah the Almighty to declare any and all transactions that may do harm to the individual and/or the community as unlawful and prohibited lest these should incur severer atrocities or harmful consequences.

In short, for a Muslim to be financially disciplined, one should …