How Ibn al-Haytham Changed the Course of Science! (P. 1) 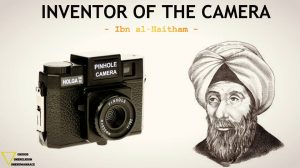 Ibn al-Haytham’s work was remarkable for its emphasis on proof and evidence.

Born around a thousand years ago in present day Iraq, Al-Hasan Ibn al-Haytham (known in the West by the Latinised form of his first name, initially “Alhacen” and later  “Alhazen”) was a pioneering scientific thinker who made important contributions to the understanding of vision, optics and light. His methodology of investigation, in particular using experiment to verify theory, shows certain similarities to what later became known as the modern scientific method.  Through his Book of Optics (Kitab al-Manazir) and its Latin translation (De Aspectibus), his ideas influenced European scholars including those of the European Renaissance. Today, many consider him a pivotal figure in the history of optics and the “Father of modern Optics”.

Ibn al-Haytham was born during a creative period known as the golden age of Muslim civilization that saw many fascinating advances in science, technology and medicine. In an area that spread from Spain to China, inspirational men and women, of different faiths and cultures, built upon knowledge of ancient civilizations, making discoveries that had a huge and often underappreciated impact on our world.

Ibn al-Haytham’s work was remarkable for its emphasis on proof and evidence. He is known to have said:

“If learning the truth is the scientist’s goal… then he must make himself the enemy of all that he reads. ” By this he meant it was essential to conduct experiments to test what is written rather than blindly accepting it as true.

Ibn al-Haytham was born in the year 965 in Basra, and died in about 1040 in Cairo. He was one of the earliest scientists to study the characteristics of light and the mechanism/process of vision. He sought experimental proof of his theories and ideas. During many years living in Egypt, ten of which were spent under what we may now call protective custody (house arrest), he composed one of his most celebrated works, the Kitab al-Manazir, whose title is commonly translated into English as Book of Optics but more properly has the broader meaning Book of Vision.

Ibn al-Haytham made significant advances in optics, mathematics and astronomy. His work on optics was characterized by a strong emphasis on carefully designed experiments to test theories and hypotheses. In that regard he was following a procedure somewhat similar to the one modern scientists adhere to in their investigative research. 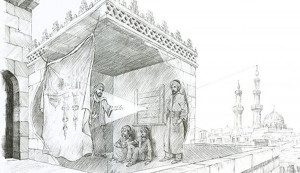 Ibn al-Haytham experimented to prove that we see because light from objects travels in a straight line into our eyes.

Different views about how the process of vision could be explained had been in circulation for centuries mainly among classical Greek thinkers.   Some said rays came out of the eyes, while others thought something entered the eyes to represent an object. But it was the 11th-century scientist Ibn al-Haytham who undertook a systematic critique of these ideas about vision in order to demonstrate by both reason and experiment that light was a crucial, and independent, part of the visual process. He thus concluded that vision would only take place when a light ray issued from a luminous source or was reflected from such a source before it entered the eye.

Ibn al-Haytham is credited with explaining the nature of light and vision, through using a dark chamber he called “Albeit Almuzlim”, which has the Latin translation as the “camera obscura”; the device that forms the basis of photography. [IYL2015 Call to action]

Out of the 96 books he is recorded to have written; only 55 are known to have survived. Those related to the subject of light included: The Light of the Moon, The Light of the Stars, The Rainbow and the Halo, Spherical Burning Mirrors, Parabolic Burning Mirrors, The Burning Sphere, The Shape of the Eclipse, The Formation of Shadows, Discourse on Light, as well as his masterpiece, Book of Optics. Latin translations of some of his works are known to have influenced important Medieval and European Renaissance thinkers like Roger Bacon, René Descartes and Christian Huygens, who knew him as “Alhazen”. [IYL2015 Call to action] The crater Alhazen on the Moon is named in his honor, as is the asteroid 59239 Alhazen.

Ibn al-Haytham stands out in this long list as the leading figure in both the science of light and science of vision because his work depended so heavily on experimentally-based demonstrations. His work was important for two reasons:

Ibn al-Haytham greatly benefitted from being able to use the work of previous generations of scholars that had been translated into Arabic over a period of over two-three hundred years under the patronage of various Muslim rulers and wealthy aristocrats.

This included direct translation of many scientific works from Greek, Syriac and Persian which themselves were the heirs to the great scientific traditions of Ancient Egypt, Babylonia, India and China. In turn, Ibn al-Haytham’s work proved to be equally influential on scholars writing in Latin during the Middle Ages and the Renaissance. [IYL2015 Call to action] In this way, he formed part of the intellectual legacy that Latin scholars derived from Muslim civilization from the thirteenth century onwards including the Renaissance and Early Modern periods.

With new scientific insights such as those of Ibn al-Haytham, as well as medical marvels, astronomical observations, new maps, libraries and advanced schools that taught various mathematical subjects, Muslim civilization made significant and crucial contribution to the accumulation of scientific knowledge in the pre-modern age that changed the ancient world. These past discoveries have shaped our homes, schools, hospitals, towns, the way we trade, travel and our understanding of the universe.

One thought on “How Ibn al-Haytham Changed the Course of Science! (P. 1)”

Pingback: How Ibn al-Haytham changed the course of science! (P. 2)