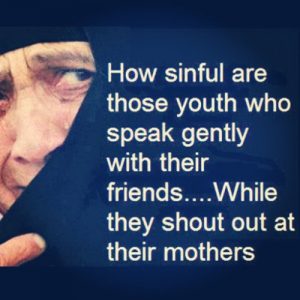 Parents are the most people deserving the kindness and compassion of man, as they are the cause of his very existence.

Kindness to Parents in Islam

Kindness to parents is doing good to them and following their instructions in lawful matters. Allah, the Exalted, has emphasized kindness to parents in more than one place in the Ever-Glorious Qur’an including, “Worship Allah and join none with Him (in worship); and do good to parents, and He enjoined on people to be kind to their parents: “And we have enjoined on man to be good and dutiful to his parents”

Our Lord has paired between being kind to parents and His worship. He, the Exalted said: “And your Lord has decreed that you worship none but Him. And that you be dutiful to your parents. If one of them or both of them attain old age in your life, say not to them a word of disrespect, nor shout at them but address them in terms of honour. And lower unto them the wing of submission and humility through mercy, and say: `My Lord! Bestow on them Your Mercy as they did bring me up when I was young”.

Our Lord prohibited parents’ disobedience even if they are disbelievers. Allah, the Exalted said : “ And if they contend with you that you should associate with Me what you have no knowledge of, do not obey them, and keep company with in this world kindly”.

Kindness to parents is one of the best and highest deeds in Islam. Abdullah bin Mas`ud (May Allah be pleased with him) reported: I asked the Prophet (PBUH), “Which of the deeds is loved most by Allah?” Messenger of Allah (PBUH) said, “Prayer at its proper time.” I asked, “What next?” He (PBUH) replied, “Kindness to parents.” I asked, “What next?” He replied, “Jihad for the cause of Allah.”

Parents are the most people deserving the kindness and compassion of man, as they are the cause of his very existence. They sacrificed their lives, efforts and health expecting no return or praise. Abu Hurairah (May Allah be pleased with him) reported: A person came to Messenger of Allah (PBUH) and asked, “Who among people is most deserving of my fine treatment?” He (PBUH) said, “Your mother”. He again asked, “Who next?” “Your mother”, the Prophet (PBUH) replied again. He asked, “Who next?” He (the Prophet (PBUH)) said again, “Your mother.” He again asked, “Then who?” Thereupon he (PBUH) said,” Then your father.”

The Prophet, peace be upon him, urged us to show kindness to our parents after their death. Abu Usaid Malik bin Rabi`ah As-Sa`idi (May Allah be pleased with him) reported: We were sitting with Messenger of Allah (PBUH) when a man of Banu Salamah came to him and asked, “O Messenger of Allah! Is there any obedience to parents left that I can show to them after their death?” He (PBUH) replied, “Yes, to pray for them, to supplicate for their forgiveness, to fulfill their promises after their death, to maintain the ties of kinship which cannot be maintained except through them, and honour their friends.”

10 thoughts on “Kindness to Parents”

Pingback: Lessons Learnt from the Story of Moses and Pharaoh

Pingback: Killer of the Lion

Pingback: Do Not Cut Off Your Ear

Pingback: Do Not Cut Off Your Ear - Discover Islam Kuwait Portal

Pingback: How Many Treasures Do You Want?