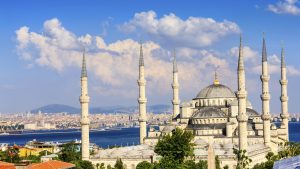 Islam does not allow the person to surrender themselves to lust and desire, as in contemporary ‘civilization’.

Some people think that to live an Islamic life is “restrictive”. Islam however, was revealed as a balanced way of living.

Allah (The Most High) created all the humans with what is called ‘A Fitrah‘ (a natural state/desire).1 Islam recognizes that within this Fitrah there are motivations that influence a man’s role on earth e.g. a desire for good food and drink, to have a home, a desire for love and sex, to protect and be protected and to be successful and strong. Without some form of control and limit, all of these legitimate motives could prove very dangerous.

So what constitutes the perfect control for the Fitrah? It must be a method that provides an organized yet practical demonstration of how to balance all these natural human desires. It cannot be something that goes against the Fitrah, by placing on it extra burdens. Likewise, it cannot be something that allows the human desires to run wild without any form of control.

Islam is the perfect control for the Fitrah. It provides a divine method that elevates man above animals and the rest of creation.

Humans lack perfect knowledge as well as perfect wisdom. No matter how hard we try, we will never attain the perfect way of life by our own thinking and interpretation. This is the reason why Allah being the Most Wise, sent us the Qur’an and the Prophet Muhammad (SAW),2 to show us this practical and organized way of life. Allah, being Perfect, in His Wisdom and Knowledge, perfected a complete way of life for us. He has set His limitations and rules, all of which are beneficial to mankind, and therefore, do not need changing:

“These are the limits set by Allah, so do not transgress them” (Al-Baqarah 2:229)

This is why Islam does not allow celibacy, because it is against the Fitrah, i.e., the desire for sex. Celibacy goes beyond the limits required by humans, and is something that cannot be fulfilled because humans are designed to procreate. As humans we are not expected to fast every single day for the rest of our lives (for most 30 days of the year provides an up-hill struggle). It is also from ignorance to say that ‘I shall not sleep during the night, but rather I shall pray!’3 Humans have not been created by Allah to live life in such a manner. There is a balance which must be observed.

The following incident describes the Islamic stance towards such behavior, Anas reported that some of the Companions of Allah’s Messenger (SAW) used to say: “I will not marry women”; someone else said: “I will not eat meat”; and someone else said: “I will not lie down in bed”. (On hearing this): The Prophet (SAW) praised Allah, and glorified Him and said: “What has happened to these people that they say so and so, whereas I observe prayer and I sleep too. I observe fast and I break my fast; I marry women also. And he who turns away from my Sunnah (i.e., my example or lifestyle), he has no relation with me” [Narrated in Sahih Muslim vol. 2. p703. no. 32361].

Islam on the other hand, does not allow the person to surrender themselves to lust and desire, as in contemporary ‘civilization’. Islam recognizes the love a man has for women, children, gold, silver, and other possessions. But it provides a limit for the amount of this worldly pleasure which we require, and reminds us of the life in the hereafter.

“Beautified for men is the love of things they desire: Women, Children, much of gold and silver (wealth), branded beautiful horses, cattle and well-tilled land. This is the pleasure of the present world’s life, but Allah has the excellent return (Paradise)” (Aal ‘Imran 3:141)

The inclinations and desires of the Fitrah are not to become the objective in life. Rather they are to be taken in a stabilized manner. The way to deal with them is real and Allah (The Most High) has given us the detailed descriptions of a levelled approach. This leveled approach gives mankind the perfectly balanced pleasure in this worldly life. The method of maintaining a well-balanced life is not an endurance test to see who lasts the longest. Allah has revealed Islam , to show us how to attain this balance in a real manner. Life is not a torturous spiritual test, where you are ordered to live in mountains and trees. Fasting all year round is not obligatory. Marriage is permissible and you do not have to beat yourself senseless to purify your soul! Rather as Muslims, we must try to follow the Prophet and his balanced teachings of life and living. As Allah says in the Qur’an:

The use of the word “restrictive” often comes from those who think they live a “free- life”. But the fact of the matter is that, wherever you go you will find rules and regulations. For example, in the workplace, in colleges and universities and more obviously on the roads, i.e. the highway and green cross codes. Wherever you are, there are rules and regulations.

Islam forbids us to follow many of the rules which are held by western culture and subcultures. Yet people in the west are more than willing to obey them, because they believe that these rules will protect them. How wrong they are! Rave subculture is a classical example of this. Informal dance floor rules dictate to us “. . . . to drink lots of water, have frequent breaks and don’t take too many pills in one go!” Despite these “recommendations”, young people are still dying.4 Western society is obsessed with ‘safe sex’, in order to ‘prevent the risk of catching AIDS’. Despite the wide availability of contraceptives, AIDS is still on the increase, and people are dropping like flies from this killer epidemic.

Do we think of these rules as being restrictive? If anything you would expect them to bring about a sense of control and order, as well as increasing the pleasure. Without realizing, people are ready and willing to accept many man-made rules. Rules that are invented by one group of people and to be obeyed by the rest of society. These rules are not perfect because man is imperfect, yet people accept them and hope and believe that they will benefit from them.