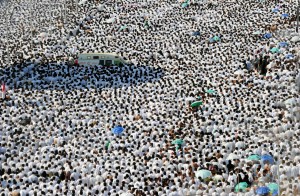 Starti/ng from Makkah on the eighth day of Dhul-Hijjah, the Prophet at midday, on his she-camel, went to Mina, where he spent the night before leaving, after sunrise, for ‘Arafat, where he delivered his major speech.

When the time of pilgrimage drew near, the Prophet caused it to be known all over Arabia that he intended to offer the pilgrimage to the Ka`bah, which has always been a religious ritual ever since Prophets Abraham and Ishmael (peace be upon them) raised that construction which was, according to the Qur’an, the first house of worship ever to be built.

It was not surprising that people started to arrive in Madinah from all over Arabia shortly after the announcement. Every day, Madinah welcomed people from far and wide.

A Procession of Love

When the Prophet completed his preparations for his blessed journey, he left Madinah at noon on Saturday the 25th of Dhul-Qa’dah in the tenth year of the Islamic calendar, which makes the Prophet’s emigration to Madinah its starting date. With him were all his wives and members of his household, the Muhajirin and the Ansar, as well as all those who came to join him from all Arab tribes.

He had with him 100 camels which he intended to slaughter as a sacrifice. When he arrived at Dhul Hulayfah, which is now better known as Abyar ‘Ali, a place about 10 kilometers from Madinah, he offered `asr prayer, shortening it to two rak`ahs, since he was travelling.

He entered into the state of consecration, wearing two white pieces of cloth, wrapping one round his waist to cover his body from the waist to well below his knees and throwing the other over his shoulders. He made his intention to offer the pilgrimage and the `Umrah combined – that is, he chose the qiran method of ihram, since he had brought his sacrificial animals with him.

This may be translated as: “I respond to Your call, my Lord. I respond to You: there is no deity other than You. All praise, grace and sovereignty belong to You. You have no partners”, what epitomizes the worship of pilgrimage which enhances the notion of total submission to God and dedication to His cause”, and which all Muslims repeated, asserting their submission and dedication to God.

It was a procession which spread a feeling of security and reassurance to all around it. Its slogan was one of peace and security. Not a single person in that procession harbored any ill feelings towards anyone. None of them carried a weapon of any sort. None harmed an animal, frightened a bird, cut down a tree or destroyed any plant. It was, in short, a procession of love which spread a feeling of kindness, peace and security all around.

Everywhere animals, birds and trees were at peace. The procession was at peace with all people and with all creatures. Its objective was one of love and solidarity. Its mark was one of true brotherhood and absolute equality. No worldly considerations distinguished any group in that procession over any other group. It was a dedicated procession in which there was no place for carnal desires, futile arguments, social distinction or quarreling. It was a demonstration of love and brotherhood established on the solid basis of fearing to incur God’s anger and seeking to earn His pleasure.

After several days the procession arrived in Makkah at sunset of the fourth day of Dhul-Hijjah. The Prophet stayed the night at Dhu Tuwa, on the outskirts of Makkah. In the morning he had a bath and entered Makkah in daylight. When the Prophet arrived at the Ka`bah and saw the holy place, he lifted his hands and prayed to God to multiply the honor and sanctity of the House, and to honor and reward everyone who honors the House by offering pilgrimage or ‘Umrah. The Prophet entered the mosque and began his tawaf round the Ka`bah.

When he had finished his tawaf, he offered a prayer behind the position known as Maqam Ibrahim. Mounting his she-camel, he then proceeded to do the walk, sa’i, between the two hills of al-Safa and al-Marwah. When he had finished that, he gave his orders to the Muslims with him who had not brought their sacrificial animals with them to release themselves from consecration, or ihram, until the time for pilgrimage was due. The Prophet and his companions stayed in Makkah until the 8th of Dhul-Hijjah, the time when the duties of the pilgrimage were due.

Starting from Makkah on the eighth day of Dhul-Hijjah, the Prophet at midday, on his she-camel, went to Mina, where he spent the night before leaving, after sunrise, for ‘Arafat, where he delivered his major speech. The Prophet’s speech that day was the highlight of his pilgrimage, outlining the nature of Islamic society.

After beginning his speech with, as usual, the praise and glorification of God he went on to say:

“People, listen to me as I explain to you, for I do not know whether I will ever meet you again in this place after this year. People, do you know in what month, day and city you are?”

Have I delivered my message?”

“He who holds something belonging to another for safekeeping must give it back to the person to whom it belongs. All usury transactions which have been made in the past days of ignorance are hereby abrogated. You may claim only your capital, neither inflicting nor suffering any injustice.

God has decreed that no usury is permissible. The first usury transactions I abrogate are those of my uncle, al-‘Abbas ibn ‘Abd al-Muttalib. All cases of vengeance killings are hereby waived.

The first case of killing I thus waive is that of ‘Amir ibn Rabi’ah ibn al-Harith.

“People, the postponement of sacred months is an excess of disbelief, a means by which those who disbelieve are led astray. They declare this postponement to be permissible in one year and forbidden in another, in order to conform outwardly to the number of months which God has made sacred, and thus they make allowable what God has forbidden. Time has now been set back in its original fashion which it had when God created the heavens and the earth.

The number of months, in the sight of God, is twelve, out of which four are sacred, three consecutive ones and a single one: Dhul-Qa’dah, Dhul-Hijjah, Muharram and Rajab, which falls between Jumada and Sha ‘ban. This is the ever-true law of God.

Do not, then, sin against yourselves with regard to these months. When I am gone, do not revert to disbelief, killing one another.

They answered: “You certainly have.”

Continuing his speech he said:

“People, you have an obligation towards your womenfolk and they have an obligation towards you. It is their duty not to allow into your homes anyone whom you dislike without your permission. Should they do that, God has permitted you to desert them in bed, then to beat them without any severity. Should they desist, they have the right to be provided with food and clothing, in fairness. Your womenfolk are in your custody; they are helpless. You have taken them on the basis of a pledge to God, and they are lawful to you with God’s word. Fear God, then, in your treatment of women, and be kind to them.

“People, the believers are brothers. It is illegal for anyone to take the property of his brother unless it is given without any coercion. People: your Lord is one and your father is one. All of you are the children of Adam, and Adam was created from dust. The most noble among you is the most God-fearing. No Arab enjoys any privilege over a non-Arab except through the fear of God. Have I delivered my message?”

They answered: “Yes, you most certainly have.”

“People, Satan has given up any hope of being worshiped in this land of yours. He is satisfied, however, to be obeyed in matters which you consider trivial. Guard yourselves against him, lest he corrupts your faith. I have left with you what should keep you safe from going astray should you hold fast to it. It is something clear and simple: God’s Book and the Sunnah of His Prophet. You will be questioned about me. What will you say?”

They said: “We bear witness that you have delivered your message complete and you have discharged your mission and given good counsel.”

The Prophet then concluded:

“Let those who are present communicate what I have said to those who are not with us today. It may happen that those who come to know of it in this way may understand it better than some of those who have listened to it.”

This memorable speech outlines five basic principles of the Islamic program of action, two of them work on the level of the individual and three relate to the structure of Islamic society. Islam moulds the character of the Muslim on the basis of two fundamental principles:

1- Islam severs all ties which a Muslim has with Ignorance, or Jahiliyyah, its idols, practices, financial dealings, usury transactions and so on, because the adoption of the religion of Islam means a start of a new life for a Muslim which is completely divorced from the erroneous ways of the past.

2- To guard against all forms of sin. The effects of sin are far more serious than the danger presented by any enemy in battle. The Prophet also made it clear that he did not mean by sin the sinking back into idolatrous worship.

The Prophet has also outlined three basic principles on which Islamic society is founded:

2- Supporting the weak so that their weakness does not make the whole society vulnerable. One should note in particular how the Prophet stressed the importance of being kind to women, since they are the weaker element in society.

3- The cooperation between an Islamic government and the members of an Islamic society to achieve the proper implementation of Islamic law which works for the removal of all evil from society and its replacement with what is good.

Short as it was, the Prophet’s speech included all the principles which are needed for the molding of the perfect believer in Islam and the perfect Muslim society.

This article is excerpted from Adil Salahi’s book Muhammad: Man and Prophet, published by the Islamic Foundation. This summarized version is republished here with kind permission and with slight editorial changes.