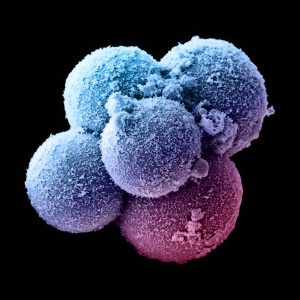 Only one or rarely two of the few sperms which stuck onto this zona radiata manages to penetrate into the egg.

As all the living beings, human being is also created from a male and a female. Gametes (germ cells) of male and female are being coupled at the widest point of cervix within a time span of 12 to 48 hours and thus resulting in the formation of a new and different human zygote.

Although 300 to 600 million sperms set off at the beginning of this period in order to meet with ovule, only the predestined one of them enter into the egg.

For insemination to be possible, an average of 400 million sperms should be available at every ejaculation.

Only 300 to 500 of these sperms would reach at the spot where they couple with the egg (ovum) in tubes, for as much number of sperms as possible should encircle the egg in order for the zygote to be formed.

In case the number of ejaculated sperms would be around 60 to 70 million, only 60 to 70 of them would reach at the spot where they couple with the egg in tubes and this is one of the reasons of male infertility.

The 300 to 500 sperms which strive to enter into egg meet with the cell layer (corona radiata) which is being serially positioned around the zona radiata.

A liquid is secreted from this zona radiata which punctures the euchromosome 1 placed on tip of sperm.

Each of various enzymes set free following the puncture of euchromosome is assigned to overcome a separate obstacle before the sperm.

Duty of the hyaluronidase enzyme, for instance, is to puncture the outer cell layer (corona radiata) which is assigned to protect the egg.

Resultantly, the sperm passes through this cell layer and sticks onto the zona radiata (zona pellucida).

The quasi-trypsin dissolutive (proteolytic) enzymes are employed for overcoming the zona radiata.

Only one or rarely two of the few sperms which stuck onto this zona radiata manages to penetrate into the egg.

It has been estimated that plurality of sperms around the egg, contrary to their rarity, facilitates their entry into the egg. The sperm penetrates into the egg with its tail but tail membrane stays outside.

The protective membrane of the ovum (zona pellucida) starts diffusing calcium within the very first minutes of sperm’s penetration and resultantly, granules are released, receptors are exterminated and the egg becomes structurally transformed.

Consequently, a thick layer is formed over the protective membrane (zona pellucida) for prevention of penetration of another sperm. Following the sperm’s penetration into egg (cytoplasm), the “fusion” process starts.

Fusion is the unification process of sperm and egg cells (pronuclei) each of which are separately containing 23 chromosomes.

Thus, construction of a genetic library which is containing 46 chromosomes and being prerequisite of formation (creation) of a new human baby is completed.

Afterwards, the first mitotic division gives way to a double-celled zygote and the embryo starts forming while settling into the secure base of the uterus.

As the outcoming child is going to be a mixture, i.e., a genuine and particular blend of the genetic codes available in the inherited gene pool, he/she will have resemblance to his/her parents and thus to their reciprocal kins (paternal and maternal grandparents, uncles and aunts and etc.). 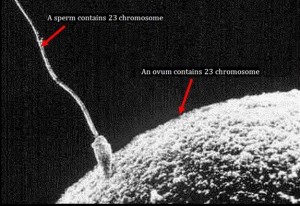 Prophet Muhammad, peace be upon him, pointed in his various sayings and explanations to the fact that the baby in mother’s womb carries a number of genetic features (characteristics) which are being inherited from the parents: When a Jewish person asked Him, “what is man created from?” he replied: “Man is created from a blend (mixture) of zygotes of both man and woman.” Then the Jew said: “Moses as well said the same before you.”2

Prophet Muhammad, peace be upon him, also shed light onto the fact of resemblance or inheritance of character by way of genes: “Is bathing a must for women?” asked Umm Sulaim to the Prophet. “Yes, it is a must when her seminal fluid outflows and seen,” he replied. “Do women have wet dreams?” she asked. “May God grant you goodness! How otherwise a child resembles to his/her mother?” He replied.3

As seen and understood by His above hadith (saying), He who was the great teacher of mankind was the first person who said that women do also see wet dreams.

He has also been the first person who articulated the concept of “dominancy,” which wasn’t understood before 1850s. He said: “The child resembles to either side of the parents whose seminal fluid comes to the fore and surpasses the others in mother’s womb during the intercourse. If there is an equilibrium, then, resemblance is also in equilibrium for both sides.”4

In another one of His sayings, He points out to the fact that the recessive characters (features) in the grand ancestral gene pool would dominantly and collectively emerge after following a couple of generations: “A man having a blackish baby boy approached and said to the Prophet: “I am suspecting my wife.” “Do you have camels?” the Prophet asked him. “Yes,” he replied. “Then, how are their colors?” The Prophet asked. “Red.” “Is there any one with grey color among them?” “Yes, there is.” “Then, where did this grey color come from?” asked the Prophet. “Presumably from a line of its ancestors,” the man responded. “Here you are! This child of you is also presumed to be coming from a line of your ancestors,” the Prophet told the man.7

Taken with slight editorial modifications from the Fountain Magazine: Issue 81 / May – June 2011.

Dr. Arslan Mayda is a medical doctor at Sifa Hospital in Izmir, Turkey.

One thought on “Creation of Nutfah, the Zygote”