Earth as an Exhibition of God’s Art 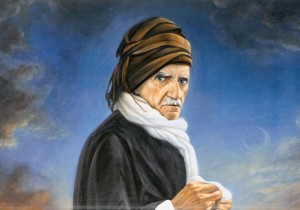 This nickname came to Badiuzzaman early in his youth, when he excelled in his studies of Islam and mastered the skill of theological debate.

At the turn of the 19th century, civilization was at a crossroads, a chasm was widening between science and faith, but Badiuzzaman Said Nursi was born to build bridges.

Living in a modern age with an enlightened mind, the junction of science and religion never represented a parting of the ways with Badiuzzaman.

However, while previously ignorance had been the enemy of faith, now this new age of science was striving mightily against the faithful.

For the sake of unity he pushed back relentlessly with both pen and armed resistance, and for 85 years Badiuzzaman embodied his own belief that science and religion, nature and the transcendent, were equally eloquent expressions of the same truth.

Born in 1877 in Nurs, southeastern Turkey, the Kurdish Imam Said Nursi is internationally recognized as Badiuzzaman, or, “the most unique and superior person of the time.”

This nickname came to Badiuzzaman early in his youth, when he excelled in his studies of Islam and mastered the skill of theological debate.

At fifteen, Badiuzzaman was invited to reside with the Governor of Van Province, and lived there for 15 years while continuing his education in the sciences, debating with professors, and presenting lectures to students.

It was during this period, at the age of 21, Badiuzzaman read a news article reporting that British Minister of Colonies Gladstone had said to the British Parliament as he held a Qur’an: “We cannot rule over the Muslim as long as this Qur’an remains in their hands; we must do everything possible to remove the Qur’an away from Muslims or alienate them against the Qur’an.”

Defeating the Plot to Destroy Islam

From this defining moment forward, Badiuzzaman devoted his entire life as an Islamic scholar to proclaiming the glory of the Qur’an, its miraculous viewpoint of nature and the universe, and its inspirational guidance to the true source of all wisdom and knowledge – that is, Allah, The Creator.

Badiuzzaman, in this early period of his career, said, “If man does not believe in the All-Wise Maker, Who performs everything wisely and with order, and unthinkingly attributes everything to chance; and if he thinks of the inadequacy of his power in the face of those calamities; it will result in a hellish and heartrending state for him, of compounded fright, fear, alarm, and anxiety. Being the noblest and best of creatures, he will be more wretched than anything, thus opposing the reality of the perfect order of the universe.”

Advocating for an Islamic University to be established in Eastern Anatolia, Imam Nursi believed that the plot to destroy Islam must be defeated by educating Muslims as both scholars of Islam and modern scientists.

“The light of wisdom is positive sciences,” said Badiuzzaman, “the light of conscience is religious sciences. When two are combined, truth arises thereupon.”

Activism in a Time of Ideological Transition

Advocating for stronger unity among the diverse peoples of the Ottoman Empire, he proposed educational reforms to facilitate dialogue between traditional religious madrassah training, Sufism, and modern scientific pursuits.

However, the turn of the century was turbulent all over the world, and the Ottoman Empire was arguably the epicenter of the earthquake.

Slowly imploding, the Ottoman Caliphate was embroiled in endless coup and counter-coup, and Imam Nursi found himself buffeted in the political crosswinds.

Detained for involvement in the 1909 Ottoman counter-coup against the liberalist Committee of Union and Progress, Sunni Imam Nursi was shortly acquitted and set free.

It was a time of ideological transition, as much as political, and Badiuzzaman’s first encounter with the legal system wasn’t to be his last.

As existentialism and modern humanist philosophical perspectives rose in popularity, atheism gained traction, and coincidence became the answer to all universal mysteries.

“I will show and prove to the entire world,” he stated, “that the Qur’an is a never-fading, inextinguishable spiritual Sun.”

Always adamantly explaining to his many students that his way of looking at the universe is, in fact, the Qur’anic view, Badiuzzaman pointed out that this Qur’anic view of the universe is a primary differentiation between Islam and modern philosophy: “With its acute expositions, the Qur’an of Miraculous Exposition rends the veil of familiarity and the habitual cast over all the beings in the universe, which are known as ordinary things but are all extraordinary and miracles of Divine power, and reveals those astonishing wonders to conscious beings. It attracts their gazes and opens up before their minds an inexhaustible treasury of knowledge.”

He then added: “As for philosophy, it conceals within veils of the commonplace all the miracles of power, which are extraordinary, and passes over them in an ignorant and indifferent fashion.”

Military Campaigns and Commentary on the Qur’an

Commanding a regiment formed from his own students, Imam Nursi fought in World War I while simultaneously writing his famous commentary of the Qur’an, called “Isharat-ul I’jaz,” or “Signs of Miraculousness.”

When the Russians overtook Bitlis, he was wounded, captured, and imprisoned as a POW for two and a half years in Siberia.

Escaping the camp in 1918, Badiuzzaman made his way back to Istanbul, welcomed as a member of the Islamic Academy, Dar al Hikmat al Islamiye.

When the English occupied Istanbul, Imam Nursi once again joined in military resistance, supporting the National Independence Army. Rewarding his activities in Istanbul, Badiuzzaman was invited to the new parliament in Ankara.

Although the war for independence had been won, nevertheless European ways were taking hold, and the outspoken Imam was disappointed in Ankara.

Finding most of the assemblymen westernized and neglecting their prayers, Imam Nursi issued a declaration exhorting them on the value and importance of their prayers.

When Mustafa Kemal Ataturk, the new leader of the Turkish Republic, offered him the post of Minister of Religious Affairs, Imam Nursi famously declined.

Depressed, Badiuzzaman opted instead to return to Van, in spite of the many lucrative offers he received to stay in Ankara.

Another rebellion broke out in 1925, exchanging Imam Nursi’s life of seclusion in Van for exile in Isparta Province.

Among the charges leading to his exile under the Secularist Kemalist regime was the crime of raising the adhan, or call to prayer, in Arabic.

Moved to Barla after attracting too much attention for his teachings in Isparta, Badiuzzaman’s life took another turn.

Aisha Abdelhamid is a native of Long Beach, California, happily residing in Egypt with her husband, Mohamed.

A syndicated writer for Important Media Network, Aisha often represents the Muslim perspective on EdenKeeper.org, an interfaith website exploring the relationship between faith and the natural environment.

One thought on “Earth as an Exhibition of God’s Art”

Pingback: Earth as an Exhibition of God’s Art -