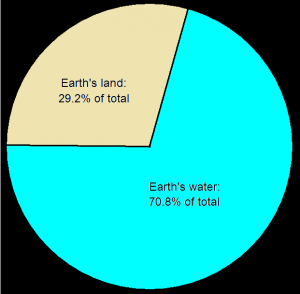 The ratio of the appearances of the words “sea” and “land” in the Qur’an is identical to the ratio between sea and land in modern science. The continents had not yet been discovered at the time the Qur’an was sent down, and it was impossible to determine the ratio between the land and sea. Even such a large continent as America was only discovered in the 15th century.

The repetition of these words in the Qur’an may be an indication that the Earth is 71% covered in water and 29% in dry land. (Allah knows the truth.) It has only been possible to arrive at this ratio in the present day, thanks to satellite photos and computer calculations.