A Red Rose in the Sky: The Rosette Nebula 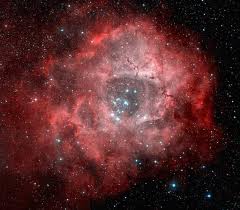 Nebula is the name given to cloud-like masses of gas in space. Before they become nebulae they are stars, and since these stars are very large, they release gasses into space because of their high internal pressure and temperatures

“When the Heaven shall be cleft asunder, and become rose red, like stained leather.” (Ar-Rahman 55:37)

The Arabic expression translated above as “become rose red, like stained leather” is “wardatan ka dukhani.” This term compares an image appearing in the sky to a red rose. This description bears a close similarity to red celestial bodies with a plicate appearance, especially the “Rosette Nebula.”

Nebula is the name given to cloud-like masses of gas in space. Before they become nebulae they are stars, and since these stars are very large, they release gasses into space because of their high internal pressure and temperatures. These eruptions of gas are very large and fast. These gasses then coalesce to form a gas cloud, with a temperature of more than 15,000 0 C.1

One type of nebula is known as the “Rosette Nebula” because of its resemblance to a rose. The Rosette Nebula is also a vast cloud of gas and seems to have an area five times greater than that of the full moon.2 Its true diameter is estimated at 130 light years.3

A team led by Leisa Townsley, a senior Penn State University researcher in the field of astronomy and astrophysics, examined the Rosette Nebula using the Chandra X-ray telescope. They imaged hundreds of stars in the Rosette Nebula and determined that by crashing into one another stars produce gas at temperatures of 6 million degrees. Townsley describes what she saw:

A ghostly glow of diffuse X ray emission pervades the Rosette Nebula and perhaps many other star-forming regions throughout the Galaxy. We now have a new view of the engine lighting the beautiful Rosette Nebula and new evidence for how the interstellar medium may be energized.”4

The existence of this body seen in the illustrations can only be confirmed by high-tech observation equipment. This state of affairs regarding the skies noted in the Qur’an is in great agreement with the findings of present-day astronomy. In one verse of the Qur’an we are told:

“You do not engage in any matter or recite any of the Qur’an or do any action without Our witnessing you while you are occupied with it. Not even the smallest speck eludes your Lord, either on earth or in heaven. Nor is there anything smaller than that, or larger, which is not in a Clear Book.” (Yunus 10:61)

2 thoughts on “A Red Rose in the Sky: The Rosette Nebula”

Dearest visitor, thank you so much for your kind words. We hope that you become a regular visitor to our site. If you have any questions, please do not hesitate to send them to us. Hope to hear from you again.
Yours,
Truth Seeker Staff