The Solidity of the Atom and Electron Orbits 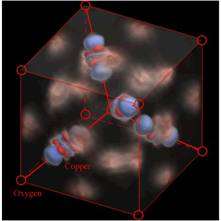 The illustration depicts the movement of electrons resembling clouds that constitute matter by joining atoms together, literally like glue.

“You will see the mountains you reckoned to be solid going past like clouds – the handwork of Allah Who gives to everything its solidity. He is Aware of what you do.” (Surat An-Naml 27:88)

The above verse may be a reference to the strength of the atom, the building block of all matter, and to the orbit of the electrons in the atom. Looked at in the context of atoms, Allah’s use of the term “to everything its solidity” can be interpreted as referring to the solidity of the atom, which cannot be broken even if struck with a sledgehammer (Allah knows the truth). That is because objects themselves are not perfectly solid, only the atom is.

For example, if a vase is shattered, only the atoms that make it up remain solid. A car may turn into a pile of junk after an accident, or a skyscraper may collapse after an explosion, but the situation remains the same whether it is a delicate flower or a tough piece of metal: the atoms in the matter do not fall apart or stray off-orbit. Therefore, even the most fragile-looking piece of matter is actually very solid in its Creation. The wisdom behind the reference to “everything” in the verse may well lie in the fact that the atom is the basis of all matter.

Very solid structures are even to be found in nuclear bombs, which work by splitting atomic bonds. In nuclear fission, the atomic nucleus is split and it is divided into two smaller atoms. In the nuclear fusion technique, two small atoms are combined together to make one larger atom. Solar energy, for instance, is manufactured in this way, by hydrogen being turned into helium. As a result, there is a constant cycle from matter to energy and from energy to matter, and there is a general solidity in the universe at the atomic level. 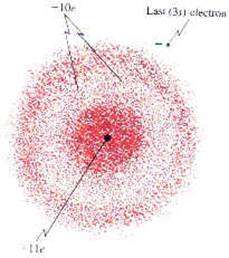 The rapid movement of electrons around the atom leads to their resembling clouds.

The verse may also be indicating the clouds of electrons around atomic nuclei, whose movement is likened to “mountains… going past like clouds.” (Allah knows the truth.) The electrons in their orbits in the atoms that make up mountains resemble a cloud in appearance in terms of their constant and rapid motion around the nucleus. Indeed, the orbiting electrons in the atom are described as an “electron cloud” in the scientific literature.(1) The concept of an electron cloud is used in molecular physics, chemistry and quantum chemistry to describe the way they move in a manner similar to a cloud around the atomic nucleus.(2)

It is impossible to understand the structure of the atom and establish this cloud-like appearance of electrons without such high-tech devices as electron microscopes. The fact that the information provided 1400 years ago in the Qur’an regarding sciences requiring advanced technology to be established is always completely accurate is one of the miracles of the Qur’an. It is also a manifestation of our Lord’s titles of Alim (He Who knows all things), Fatir (the Creator) and that Allah will see and arrange the existence of all things and Who creates accordingly, He Who creates from nothing.