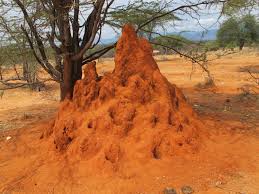 It is our Lord Who creates perfect communication between these sightless creatures, teaches them what to do and makes each one of the millions of termites in a colony performs its task.

Termites are as small insects as ants, and they are very skilful. The nests in these pictures that look like tall towers are built by these little creatures. But make no mistake: these are not simple nests; termites build them according to a plan. Special chambers for the young, fungus production fields and the queen’s chamber are only a few of the sections in a termite nest. More importantly, there is a special ventilation system.

Termites, whose skins are very thin, need humid air. For that reason they need to keep the temperature and humidity of the nest at a certain level. Otherwise, termites would die. They make the air circulate through the nest by means of special channels and use the water that comes from underground tunnels they have dug, and thus regulate the temperature and humidity.

Have you realized how hard this process is, and that termites have to act in a way marked by careful consideration of many things together? Besides that, what we have mentioned so far is merely a brief summary of the numerous things that termites do.

Another characteristic of termites is their defense of the nest, which may be up to seven meters. Termites are alarmed whenever there is a hole in the walls of their nest. Hitting their heads against the walls, termites on watch give warning to all members of the colony. Upon this warning, larvae are moved to securer places. The entrances of the chamber where the king and the queen live are blocked by quickly built walls. The damaged section is surrounded by soldier termites, which are followed by workers who carry the material to restore the wall. In a few hours, the destroyed area is covered with a heap. Then the inner compartments are constructed. Termites act following a prescribed plan and each member of the colony carries out its task without causing any disorder.

That they can do all these things in quite a short time is evidence of perfect communication between termites. Yet there is something even more amazing about the termites that establish such order, build colonies like skyscrapers and take security precautions to protect their colonies: they are BLIND.

They see nothing while carrying out all these tasks. How can these creatures be so skilful and make such plans?

The answer that evolutionists provide to such questions is that they happen “by chance”. However, this answer is not correct. That is because even a single part of the order in a termite colony, say the ventilation channels, is sufficient to prove that such a system cannot come into existence by chance. No doubt blind termites cannot ensure this perfect order and cannot have all the work performed so faultlessly. Obviously they are taught what to do. 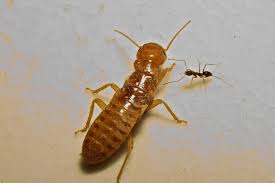 Allah has mentioned some animals in the Qur’an and urged us to reflect on these examples. For instance, the honeybee is given as an example in Surat an-Nahl. We are informed in the verse that bees that produce honey for us are taught what to do by our Lord. The verses are:

“Your Lord revealed to the bees: “Build dwellings in the mountains and the trees, and also in the structures which men erect. Then eat from every kind of fruit and travel the paths of your Lord, which have been made easy for you to follow.” From inside them comes a drink of varying colors, containing healing for mankind. There is certainly a Sign in that for people who reflect.” (Surat An-Nahl 16: 68-69)

Just like the bees referred to in the above verses, termites live in the way Allah teaches them and reveals to them. It is our Lord Who creates perfect communication between these sightless creatures, teaches them what to do and makes each one of the millions of termites in a colony performs its task.