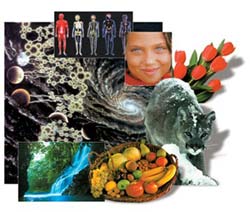 The theory of evolution, born of the primitive level of science in the nineteenth century, has been completely invalidated by successive scientific discoveries.

Those evolutionists who are blindly devoted to the theory look for a solution in demagogy, since no scientific foundation is left to them. The most frequently resorted to of these is the clichéd slogan that “creation is a faith, so it cannot be considered part of science.” The claim goes that evolution is a scientific theory, whereas creation is just a belief. However, this repetition of “evolution is science, creation is a belief” stems from a totally erroneous perspective.

Those who keep repeating that, are confusing science and materialist philosophy. They believe that science must remain within the borders of materialism, and that those who are not materialist have no right to make any statements at all. However, science itself completely rejects materialism.

Studying Matter is not the Same as Being a Materialist

Let us first briefly define materialism in order to examine the matter in more detail. Materialism is a philosophy that has existed since Ancient Greece and is based on the idea that matter is all that exists. According to materialist philosophy, matter has always existed and will continue to do so for all time. Nothing exists apart from matter. This is not a scientific claim, however, because it cannot be subjected to experiment and observation. It is simply a belief, a dogma.

However, this dogma became mixed up with science in the nineteenth century, and even came to be the basic foundation of science. Yet science is not compelled to accept materialism. Science studies nature and the universe, and produces results without being limited by any philosophical classification.

In the face of this, some materialists frequently take refuge in a simple word game. They say, “Matter is the only subject of study for science, so it has to be materialist.” Yes, science only studies matter, but “studying matter” is very different from “being a materialist.” That is because when we study matter, we realize that matter contains knowledge and design so great that they could never have been produced by matter itself. We can understand that this knowledge and design are the result of an intelligence, even if we cannot see it directly.

For instance, let us imagine a cave. We do not know if anyone has been in it before us. If, when we enter this cave, there is nothing in it but dust, earth and stones, we can infer that there is nothing but randomly distributed matter there. However, if there are expertly produced pictures in stunning colors on the walls, we may assume that an intelligent entity has been there before us. We may not be able to see that entity directly, but we can infer its existence from what it produces.

Science studies nature in the same way as shown in that example. If all the design in nature could only be explained by material factors, then science could confirm materialism. However, modern science has revealed that there is design in nature that cannot be explained by material factors, and that all matter contains a design brought into being by a Creator.

For example, all experiments and observation prove that matter could not by itself have given rise to life, for which reason life must stem from a metaphysical creation. All evolutionist experiments in this direction have ended in failure. Life can never have been created from inanimate matter. The evolutionist biologist Andrew Scott makes the following admission on the subject in the well-known journal New Scientist:

Take some matter, heat while stirring and wait. That is the modern version of Genesis. The “fundamental” forces of gravity, electromagnetism and the strong and weak nuclear forces are presumed to have done the rest… But how much of this neat tale is firmly established, and how much remains hopeful speculation? In truth, the mechanism of almost every major step, from chemical precursors up to the first recognizable cells, is the subject of either controversy or complete bewilderment.1

The root of life is based on speculation and debate because materialist dogma insists that life is the product of matter. Yet the scientific facts show that matter has no such power. Professor Fred Hoyle, an astronomer and mathematician who was knighted for his contributions to science, makes the following comment on the subject: 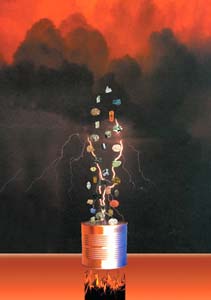 If there were a basic principle of matter which somehow drove organic systems toward life, its existence should easily be demonstrable in the laboratory. One could, for instance, take a swimming bath to represent the primordial soup. Fill it with any chemicals of a non-biological nature you please. Pump any gases over it, or through it, you please, and shine any kind of radiation on it that takes your fancy.

Let the experiment proceed for a year and see how many of those 2,000 enzymes [proteins produced by living cells] have appeared in the bath. I will give the answer, and so save the time and trouble and expense of actually doing the experiment. You will find nothing at all, except possibly for a tarry sludge composed of amino acids and other simple organic chemicals. 2

Actually, materialism is in an even worse dilemma. Matter cannot even form life when combined with human knowledge and time, let alone form it by itself.

If we look carefully, this is an entirely scientific conclusion. It is not a “belief,” but a truth acquired through observation of the universe and living things in it. That is why the evolutionists’ claim that “Evolution is scientific, whereas creation is a belief that cannot enter the domain of science” is a superficial deception. It is true that in the nineteenth century materialism was confused with science, and that science was led off course by materialist dogma.

However, subsequent developments in the twentieth and twenty-first centuries have completely overthrown that hoary old belief, and the truth of creation, that had been concealed by materialism, has finally emerged. As the banner headline “Science Finds God,” used by the famous magazine Newsweek in its historic July 27, 1998, edition makes clear, behind all the materialist deception, science finds God, the Creator of the universe and all that is in it.