The Evolutionists Myth of Homology 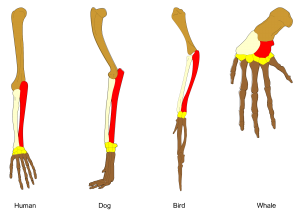 In fact, homologue organs should be a great embarrassment for evolutionists.

Structural similarities between different species are called “homology” in biology. Evolutionists try to present those similarities as evidence for evolution. Darwin thought that creatures with similar (homologue) organs had an evolutionary relationship with each other and that these organs must have been inherited from a common ancestor. According to his assumption, both pigeons and eagles had wings; therefore, pigeons, eagles and indeed all other birds with wings were supposed to have evolved from a common ancestor. Homology is a deceptive argument advanced on the basis of no other evidence than an apparent physical resemblance. This argument has never once been verified by a single concrete discovery in all the years since Darwin’s day. In no layer of the earth has anyone come up with a fossil of the imaginary common ancestor of the creatures with homologue structures. Furthermore, the following issues make it clear that homology provides no evidence that evolution has occurred.

Firstly: One finds homologue organs in creatures of completely different species among which evolutionists have not been able to establish any sort of an evolutionary relationship;

Secondly: The genetic codes of some creatures that have homologue organs are utterly different from one another.

Thirdly: The embryological development of homologue organs in different creatures is completely different.

Let us now examine each of these points one by one.

Similar Organs in Entirely Different Living Species There are a number of homologue organs shared by different species among which evolutionists cannot establish any kind of evolutionary relationship. Wings are an example. In addition to birds, we find wings on bats (which are mammals), on insects and even on some dinosaurs, which are extinct reptiles. Not even evolutionists posit an evolutionary relationship or kinship among those four different classes of animal. Another striking example is the amazing resemblance and structural similarity observed in the eyes of different creatures. For example, octopus and man are two extremely different species between which no evolutionary relationship is likely even to be proposed, yet the eyes of both are very much alike in terms of their structure and function. Not even evolutionists claim that man and octopus had a common ancestor to account for their similar eyes.

These and numerous other examples confirm that the evolutionist claim that “homologue organs prove that living species have evolved from a common ancestor” has no scientific basis. In fact, homologue organs should be a great embarrassment for evolutionists. The famous evolutionist Frank Salisbury’s confession revealed in his statements on how extremely different species came to have very similar eyes underscores the impasse of homology: “Even something as complex as the eye has appeared several times; for example in the squid, the vertebrates and the arthropods. It’s bad enough accounting for the origin of such things once, but the thought of producing them several times according to the modern synthetic theory makes my head swim.”

The Genetic and Embryological Impasse of Homology

In order for the evolutionist claim concerning “homology” to be taken seriously, similar (homologue) organs in different creatures should also be coded with similar (homologue) DNA codes. However, they are not. In most cases, the genetic coding is quite different. Furthermore, similar genetic codes in the DNAs of different creatures are often associated with completely different organs. Michael Denton, an Australian professor of biochemistry, describes in his book Evolution: A Theory in Crisis, The Genetic Impasse of the Evolutionist Interpretation of Homology: “Homologous structures are often specified by non-homologous genetic systems and the concept of homology can seldom be extended back into embryology.”

To conclude, we can say that genetic and embryological research has proven that the concept of homology, defined by Darwin as “evidence of the evolution of living things from a common ancestor”, can by no means be regarded as any evidence at all. In this respect, science can be said to have proven the Darwinist thesis false time and time again.