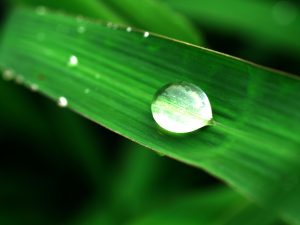 Back in the 19th century, the cell, could be examined only under a microscope, and so scientists saw the fundamental unit of life as nothing more than a circular blot. Some imagined that the interior of the cell was filled with only a plasma-like fluid; others that it contained a jelly-like substance.

Based on the images seen under the light microscope—widely used at the time, but now regarded as a rather primitive compared with present-day instruments—19th-century scientists imagined the cell to be a very simple structure, and proposed a theory that the cell had developed spontaneously and by chance.

Charles Darwin first proposed the theory of evolution in his 1859 book On the Origin of Species. He claimed that under the conditions on the so-called primordial Earth, blind coincidence combined unconscious and inanimate atoms, giving rise to a cell possessed of a flawless creation and all the features necessary for continued life. These same blind coincidences then somehow caused that first cell to allegedly evolve. According to his claim, primitive life forms developed from single cells—again by evolving spontaneously and by chance, eventually giving rise to humans, some of whom became computer engineers, professors, artists and geniuses.

Most scientists were unaware of what a complex, detailed and superior creation the cell is and what substances it contains. And so, a majority of them blindly believed in the theory of evolution, with all its illogical and ignorant claims. One reason for their support was that the theory provided important support for materialist philosophies which were growing stronger in the 19th century, denying the existence of a Creator and advancing a theory of “chance.”

Subsequently, however, in the second half of the 20th century, science and technology made especially rapid strides, bringing with them a realization that Darwin’s theory of evolution was totally at variance with the newly discovered facts. Indeed, it was devoid of any validity or scientific evidence. It had survived through a deception consisting of an imaginary scenario, reminiscent of primitive mythologies.

But some—including scientists unable to break away from this materialist theory and those who denied the existence of a Creator—continued, with great conservatism, to devotedly defend the theory of evolution and to indoctrinate young people that it was the only scientific explanation able to account for the origin of life.

Evolutionists took advantage of the fact that the great majority of people possess little detailed knowledge of scientific matters. In the course of their busy lives, they have no opportunity to think very much about such things, and succumb to a kind of mass hypnosis. Proponents of evolution employed irrational claims, most unbelievable theories, fraudulent proofs, and “very scientific” papers and books—widely adorned with Latin terminology, but actually hollow—to make the public believe that evolution was an established fact.

Today, as a result, most people imagine that evolution theory is indeed scientifically proven. They remain unaware of just how illogical and irrational the theory of evolution actually is. Yet for anyone who learns the complex and exquisite biochemical making of not just a single cell, let alone of any one of the protein molecules that comprise it, the theory of evolution is nothing more than imaginary nonsense.

Moreover, it is mathematically impossible for even a single protein molecule to come into existence by chance. Every protein molecule possesses a flawless structure that could be built only by a power possessing intelligent consciousness, information and will.

How is it, you may justifiably wonder, that scientists—who know far more about proteins than most of us—still support the theory of evolution? As already indicated, Darwinists defend the theory of evolution not because it is scientific, but because it denies the existence of a Creator and offers support for materialistic philosophies. What’s more, Darwinists themselves often admit as much! For example, Dr. Michael Walker of the University of Sydney, says:

Fred Hoyle, another world-famous evolutionist, admits the impossibility of life having begun by chance:

As these prominent Darwinist scientists admitted, it’s illogical to maintain that life began spontaneously and by chance. These scientists persist in their claims solely in order to deny the existence of a Creator.

The information you are about to read represents only a very small sampling of the data concerning proteins, the building blocks of life. However, anyone piece of this information is enough to show just how truly illogical and unbelievable is the evolution deceit that has persisted for the last 160 years.

Every protein molecule is impeccably created. Each one’s structure is exceedingly complex. An extraordinarily organized and perfect method is used in the manufacture of protein. The distribution of functions among the proteins and the flawless harmony among those different functions all show evidence of such a superior creation that not even their smallest components could have come into being by chance. Everything in the entire universe—from the particles making up the simplest atoms to the largest galaxies—is the product of a superior creation and infinite intellect and power. The Lord of all these works is our Almighty Lord Who created us all from nothing.

The way that some people, even though they are intelligent and educated, deny this and ignore such an evident truth is a miracle all by itself. Allah addresses such people in the Qur’an as follows:

“How can you reject Allah, when you were dead and then He gave you life, then He will make you die and then give you life again, then you will be returned to Him? It is He Who created everything on the Earth for you and then directed His attention up to heaven and arranged it into seven regular heavens. He has knowledge of all things.” (Al-Baqarah 2: 28-29)

This part is taken from a book by Harun Yahya titled: The Miracle of Protein. www.harunyahya.com