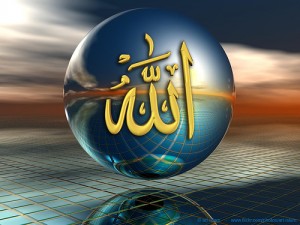 “Allah” is a special word. It indicates the only entity in existence Who truly possesses the qualities of divinity and lordship.

This name belongs to Him alone. No one else shares it. It can never be used as a name for anyone else. No one else can claim it for himself.

“Allah” is the proper name of the only one who is worthy of worship, the one whom all creation praises and glorifies. Everything on land or sea – indeed everything in the seven heavens and the seven earths – glorifies Him. The day and night praise Him.

The seven heavens and the Earth, and all beings therein, extol His glory: there is not a thing but celebrates His praise; but you do not understand how they praise Him! Verily He is Oft-Forbearing, Most Forgiving! (Al-Israa’ 17: 44)

“Allah” is comprised of letters and sounds that are easy for everyone to pronounce. They are an “l” an “h” and the vowel sound “aa”. A baby would have no problem with these sounds, regardless of what his native language might be. Even a person with speech impairment could manage to say it.

What Does Allah Mean?

This wonderful name belongs to God, as do all of His other lofty names and attributes. But what, specifically, does the name “Allah” mean?

Allah is the one and only Lord, whom the hearts and souls revere and long for. All creation depends on Him at every moment. He is the Creator, the Sustainer upon which everything and everyone depends.

All creatures, without exception, sense that Allah is the one who provides for them and for their needs, and from whom all blessings emanate. They all have a sense of His greatness, generosity, and beneficence. This is why it suits the human heart to glorify Him and extol His greatness.

Among the meanings of “Allah” is The God who is reverenced and longed for by the hearts. Allah says:

O you who believe! Whoever from among you turns back from his religion, then Allah will bring a people, He shall love them and they shall love Him. (Al-Ma’idah 5: 54)

Allah loves His worshipers who love and obey Him; who adhere to His commandments and His Law. They love Him.

The Prophet (peace be upon him) taught us that the love of Allah is the highest level of faith a believer can attain. He said:

“If anyone possesses three qualities, he will experience the sweetness of faith: The first is that Allah and His Messenger are dearer to him than anything else. The second is to love another person only for Allah’s sake. The third is to hate falling into unbelief as much as one would hate being thrown into the fire.” (Al-Bukhari, Muslim)

We see that the Prophet made the sweetness of faith depend upon three things all of which relate to love: to love Allah and to love for His sake and to hate unbelief which is none other than the rejection of Allah and His blessings.

Love is an emotion. As such, it is something that must genuinely be experienced in the heart. A believer loves the Lord and desires that the Lord returns that love. Whosoever Allah loves has no reason to fear, and the world will be an abode of contentment and virtue. Death and what comes after it will be better by far. When Allah loves a believer, He raises that person’s status in Paradise and brings that person near to Him.

Another meaning of the name “Allah” is the one who is of the utmost greatness in His names and attributes and in His grandeur. Our minds cannot grasp the extent of His greatness, nor can our imaginations. Therefore, our minds bring us to the conclusion that we must venerate this truth and admit our inability to contain the essence nature of Allah within the limits of our reason.

Allah is the First who was never preceded by non-existence.

He is the Last who will never come to an end.

He is the Manifest, and nothing is above Him.

He is the Hidden, and nothing is below Him.

There are aspects to His limitless majesty and perfection that we cannot even begin to conceive of. Our minds can apprehend something of His grandeur because Allah has blessed us with that gift. We can, therefore, draw near to Him and worship Him as best we can.

Taken with slight editorial modifications from www.en.islamtoday.net with the same title: A Few Words about Allah.

Sheikh Salman Al-Oadah is a prominent Saudi scholar, member of the International Union of Muslim Scholars and many international Fiqhi Academies.