Are We Grateful To God?

By Syed Abul Ala Maududi 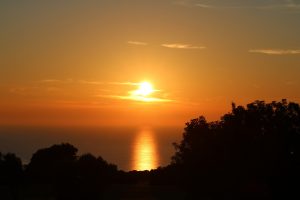 “There is a sign for them in the lifeless earth: We give it life and We produce grain from it for them to eat; We have put gardens of date palms and grapes in the earth, and We have made springs of water gush out of it so that they could eat its fruit. It was not their own hands that made all this. How can they not give thanks?” (Ya-Sin 36:33-36)

Following is a commentary of these verses of the Qur’an by Syed Abul Ala Maududi.

In these brief sentences, the vegetable and plant life of the earth has been presented as an argument. Man is consuming the products of the earth day and night and regards this as very ordinary. But if he considers it seriously, he will see that the growth of rich crops and lush green gardens from the dry earth and the flowing in it of the springs and rivers is not a simple thing, which might be happening of itself, but there is a great wisdom and power and providence which is working behind it.

The question is: How did it become possible for plant life to emerge from the lifeless earth? If one looks into it one will see that there are some important factors without whose provision beforehand life here could not have come into existence.

First, in particular regions of the earth, on its outer surface, a layer was arranged of many such substances, which could serve as food for vegetation. This layer was kept soft so that the roots of the vegetation could spread in it and suck food.

Secondly, a system of irrigation was arranged on the earth in different ways so that the food elements could get dissolved in water and absorbed by the roots.

Thirdly, the atmosphere was arranged around the earth which protects it against the calamities of the sky, becomes a means of the rainfall, and possesses gases which are necessary for the life and growth of the vegetation.

Fourthly, a relationship was established between the sun and the earth so as to provide proper temperature and suitable seasons for the vegetation.

With the provision of these main factors (which in themselves are combinations of countless other factors), the coming to life of the vegetation becomes possible. After arranging the suitable conditions the seed of each species of the vegetation was so constituted that as soon as it received favorable soil, water, air and season, vegetable life should begin stirring within it. Besides, inside the same seed, a system was so arranged that from the seed of every species a plant precisely of the same species should grow with all the characteristics of its own species and heredity.

Then, in addition to this, another wonderful thing was done. Vegetation was not created in twenty, or fifty, or a hundred kinds but in countless species, and they were so made that they should fulfill the requirements of food, medicine and clothing and innumerable other needs of the countless kinds of animals and man, who were to be brought into being after the vegetation on the earth.

Anyone who ponders over this wonderful arrangement, if he is not stubborn and prejudiced, will himself testify that all this could not have come about by itself. There is certainly a wise plan underlying it, according to which harmonies and relationships of the soil, water, air and season with respect to the vegetation, and harmonies and relationships of the vegetation with respect to the needs and requirements of animals and human beings have been determined, keeping in view the finest detail.

No sensible person can imagine that these universal, all-embracing relationships could be a mere accident. This same subtle arrangement points to the fact that this cannot be the work of many gods. This is, and can only be, the work of One God, Who is the Creator and Lord of the earth, water, air, sun, vegetation, animals and mankind.

If each of these had a separate god, it cannot be imagined that such a comprehensive and universal plan with such deep and wise relationship and harmony could be produced, and should have continued to work with such regularity for millions upon millions of years.

After giving these arguments for Tauhid (confirming the Oneness of God the creator of the universe), Allah says: “Do they not then give thanks?” That is: “Are these people so thankless and ungrateful that they do not render thanks to that God Who has provided all this for their survival, but thank others for the blessings and favors done by Him? Are they so wretched that instead of bowing before Him they bow before the false gods, who have not created even a blade of grass for them.