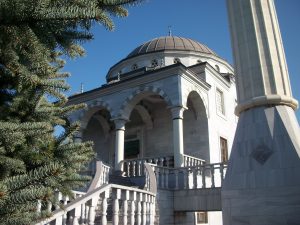 Normally, when I meet an atheist, the first thing I like to do is to congratulate him and say, “My special congratulations to you”, because most of the people who believe in God are doing blind belief – he is a Christian, because his father is a Christian; he is a Hindu, because his father is a Hindu; the majority of the people in the world are blindly following the religion of their fathers. An atheist, on the other hand, even though he may belong to a religious family, uses his intellect to deny the existence of God; whatever concept or qualities of God he may have learned in his religion may not seem to be logical to him.

My Muslim brothers may question me, “Zakir, why are you congratulating an atheist?” The reason that I am congratulating an atheist is that he agrees with the first part of the Shahadah i.e. the Islamic Creed, ‘La ilaaha’ – meaning ‘there is no God’. So half my job is already done; now the only part left is ‘il lallah’ i.e. ‘BUT ALLAH’ which I shall do Insha Allah. With others (who are not atheists) I have to first remove from their minds the wrong concept of God they may have and then put the correct concept of one true God.

Similarly, the atheist rejects the false gods and the duty of every Muslim is to present the correct concept of God which he shall Insha Allah not refuse.

If a new object or a machine, which no one in the world has ever seen or heard of before, is shown to an atheist or any person and then a question is asked, “Who is the first person who will be able to provide details of the mechanism of this unknown object?” After a little bit of thinking, he will reply, ‘the creator of that object.’ Some may say ‘the producer’ while others may say ‘the manufacturer.’ Whatever answer the person gives, keep it in your mind, the answer will always be the creator, the producer, the manufacturer, or somewhat of the same meaning, i.e. the person who has made it or created it. Do not grapple with words! Whatever answer he gives, the meaning will be the same, therefore accept it.

Scientific facts mentioned in the Qur’an:

Let us apply this theory of probability to the Qur’an, and assume that a person has guessed all the information that is mentioned in the Qur’an which was unknown at that time. Let us discuss the probability of all the guesses being simultaneously correct.

At the time when the Qur’an was revealed, people thought the world was flat, there are several other options for the shape of the earth. It could be triangular, it could be quadrangular, pentagonal, hexagonal, heptagonal, octagonal, spherical, etc. Let us assume there are about 30 different options for the shape of the earth. The Qur’an rightly says it is spherical if it was a guess the chances of the guess being correct is 1/30.

Further, the Qur’an also mentions every living thing is made of water. Every living thing can be made up of either wood, stone, copper, aluminum, steel, silver, gold, oxygen, nitrogen, hydrogen, oil, water, cement, concrete, etc. The options say about 10,000. The Qur’an rightly says that everything is made up of water. If it is a guess, the chances that it will be correct is 1/10,000 and the probability of all the three guesses i.e. the earth is spherical, the light of the moon is reflected light and everything is created from water being correct is 1/30 x 1/2 x 1/10,000 = 1/60,000 which is equal to about .0017%.

The Qur’an speaks about hundreds of things that were not known to men at the time of its revelation. Only in three options, the result is .0017%. I leave it up to you, to work out the probability if all the hundreds of the unknown facts were guesses, the chances of all of them being correct guesses simultaneously and there being not a single wrong guess. It is beyond human capacity to make all correct guesses without a single mistake, which itself is sufficient to prove to a logical person that the origin of the Qur’an is Divine.

The creator is the author of the Qur’an

The only logical answer to the question as to who could have mentioned all these scientific facts 1400 years ago before they were discovered, is exactly the same answer initially given by the atheist or any person, to the question who will be the first person who will be able to tell the mechanism of the unknown object. It is the ‘CREATOR’, the Producer, the Manufacturer of the whole universe and its contents. In the English language, He is ‘God’, or more appropriate in the Arabic language, ‘Allah’.

Qur’an is a book of signs and not science

Let me remind you that the Qur’an is not a book of Science, ‘S-C-I-E-N-C-E’ but a book of Signs ‘S-I-G-N-S’ i.e. a book of ayaats. The Qur’an contains more than 6,000 ayaats, i.e. ‘signs’, out of which more than a thousand speak about Science. I am not trying to prove that the Qur’an is the Word of God using scientific knowledge as a yardstick because any yardstick is supposed to be more superior than what is being checked or verified. For us Muslims, the Qur’an is the Furqan i.e. criteria to judge right from wrong and the ultimate yardstick which is more superior to scientific knowledge.

But for an educated man who is an atheist, scientific knowledge is the ultimate test which he believes in. We do know that science many times takes ‘U’ turns, therefore I have restricted the examples only to scientific facts which have sufficient proof and evidence and not scientific theories based on assumptions. Using the ultimate yardstick of the atheist, I am trying to prove to him that the Qur’an is the Word of God and it contains the scientific knowledge which is his yardstick which was discovered recently, while the Qur’an was revealed 1400 years ago. At the end of the discussion, we both come to the same conclusion that God though superior to science is not incompatible with it.

Science is eliminating models of God but not God

Francis Bacon, the famous philosopher, has rightly said that a little knowledge of science makes man an atheist, but an in-depth study of science makes him a believer in God. Scientists today are eliminating models of God, but they are not eliminating God. If you translate this into Arabic, it is La illaha illal la, There is no god, (god with a small ‘g’ that is fake god) but God (with a capital ‘G’).

Soon We will show them our signs in the (farthest) regions (of the earth), and in their own souls, until it becomes manifest to them that this is the Truth. Is it not enough that thy Lord doth witness all things? (Fussilat 41:53)

Taken with slight modifications from www.irf.net.

One thought on “Proving the Existence of Allah to an Atheist”