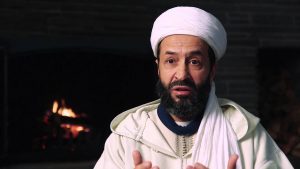 877-Why-Islam presents a talk by Sh. Mokhtar Maghraoui – The historical background that led to the scientific and secular revolutions which contributed to the current day acceptance of “Godless” societies. A comparison of the foundations of Atheism and Islam.

From Wikipedia (The Editor):

Atheism is, in the broadest sense, an absence of belief in the existence of deities. Less broadly, atheism is a rejection of the belief that any deities exist. In an even narrower sense, atheism is specifically the position that there are no deities. Atheism is contrasted with theism, which, in its most general form, is the belief that at least one deity exists.

Etymological History of the term:

The etymological root for the word atheism originated before the 5th century BCE from the ancient Greek ἄθεος (atheos), meaning “without god(s)”. In antiquity, it had multiple uses as a pejorative term applied to those thought to reject the gods worshiped by the larger society, those who were forsaken by the gods, or those who had no commitment to belief in the gods. The term denoted a social category created by orthodox religionists into which those who did not share their religious beliefs were placed. The actual term atheism emerged first in the 16th century.

With the spread of freethought, skeptical inquiry, and subsequent increase in criticism of religion, application of the term narrowed in scope. The first individuals to identify themselves using the word atheist lived in the 18th century during the Age of Enlightenment. The French Revolution noted for its “unprecedented atheism,” witnessed the first major political movement in history to advocate for the supremacy of human reason.

The debate over Atheism:

Arguments for atheism range from philosophical to social and historical approaches. Rationales for not believing in deities include arguments that there is a lack of empirical evidence, the problem of evil, the argument from inconsistent revelations, the rejection of concepts that cannot be falsified, and the argument from non-belief.

Nonbelievers contend that atheism is a more parsimonious position than theism and that everyone is born without beliefs in deities; therefore, they argue that the burden of proof lies not on the atheist to disprove the existence of gods but on the theist to provide a rationale for theism. Although some atheists have adopted secular philosophies (e.g. secular humanism), there is no one ideology or code of conduct to which all atheists adhere.

Watch the video to learn more…

Destruction of Atheism in Few Words