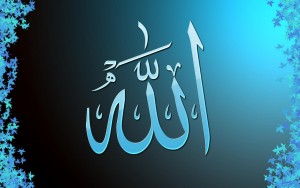 “All those in the heavens and the earth glorify Allah” (Al-Hadid 57:1)

The Qur’an tells us that:

“The Beneficent God is firmly established on the throne (of authority).” (Ta-Ha 20:5)

“Above them” in 16:50 refers to the Almighty being above His servants in His Might, Power, Loftiness, not to being above them in place, space, area, elevation, or physical location; these do not apply to Him. The Messenger of Allah called upon His Lord during his ascension to heavens pleading to Him thus, “You are as You have praised Your own Self,” and Prophet Yunus (Jonah) son of Matta, while being in the bottom of the sea, called upon his Lord saying,

“There is no god but You! Glory to You! Surely I have become one of those who commit injustice against their own souls!” (Al-Anbiya’ 21:87)

The Messenger of Allah has said, “Do not exalt me over him [over Yunus] in nearness to Allah just because I reached the High Throne while he was in the bottom of the sea, for the Adored One is above being confined to space or a direction.” He has also addressed Him saying, “You and he in the strata of the heavens;” the believers call upon Him saying,

“You and them on earth.” Had He been in a particular area or place, all these persons could not have differed from one another in His regard at any given time. He is above being confined to place or direction:

“All those in the heavens and the earth glorify Allah” (Al-Hadid 57:1)