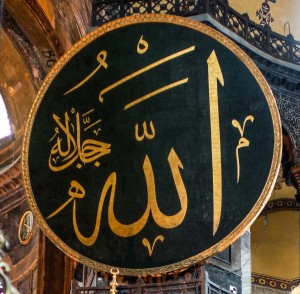 Train your tongue to praise and remember Him often no matter where you are and what you are doing to the point where it becomes a habit.

Fearing Allah becomes an honorable state of a worshipper which will lead him to a much higher state than the ordinary person.

Is loving God enough to earn a person a ticket to Paradise?

A Christian may say “yes”, and a Muslim may also say “yes” and add that loving God is one of three elements necessary for entry to Paradise.

The other two are fear and hope.

All elements are interconnected and one by itself is not sufficient for a person to reach the ultimate goal of God consciousness which is the vessel that leads a believer to Paradise.

Love is the driving force for humans to make any forward movement toward a goal that involves the heart. This love can be driven by physical, mental and spiritual elements.

The love for God starts in a mental level and it is further elevated to the spiritual level by proper nurturing and practices. Islam teaches this through the best manual – the Qur’an.

As we come to know Him through His ways of dealing with His creations, His love, forgiveness, the vast blessings that He has bestowed on us, as well as His immense guidance, we cannot but grow in love of Him.

But loving God alone is not sufficient.

In the years when I was practicing Christianity, I grew to love God through continuous reading of the Books of the Old Testament. I was amazed how much caring God showed to humans starting from Adam by sending them Prophets and guidance and how ungrateful His creatures were.

Time and time over He would send Prophets to guide mankind. The consequence of their rejection was repeated defeats by their enemies and their subjugation to the disbelieving nations. But as they repented and obeyed their prophets, God showered His blessings upon them and gave them victories.

I noticed that there were various chapters that included lamentations of their Prophets for continuous disobedience and rebellion of the so-called believers in God.

I realized that the missing element was “fear.” They feared not their God nor did they care for the consequences of their disobedience.

When I put my focus on the New Testament, I noticed that “love” was the driving element that encouraged belief and obedience. I liked that … but there was a problem.

We were told as long as we loved and accepted Jesus as our Savior, we are going to make it to Paradise. Well, this was an easy way to go to heaven. Yet when I noticed that many engaged in sinful acts and still very active in Church and truly believed that they were saved, I questioned the whole concept of redemption.

If Jesus died for my sins, does that mean, by accepting him as my savior I can sin and still make it to Paradise? I don’t think I ever heard the Pastor talk about Hell or any topic containing fear.

It got worse when I felt that the only way to pray was to pray to Jesus, as He was supposedly God. The God that I was searching for did not look like a man-Jesus. But I did and still love Jesus very much, as a righteous Prophet of God.

The continuous missing elements lead me to take a deeper look into Islam. Then, I saw that “fear, love and hope” combined, were my missing links. Islam had the answer.

If your mother did not warn you, as a child, about burning your hand when getting near the stove, what would happen?

Likewise if your father did not put you on alert about the dangers that are waiting for you out there as a youth, what then? These fear elements may have saved you much trouble.

You had the choice to listen or not. You would face the consequences. Yet Allah warns us about not only the consequence of disobedience of His laws in this world, but also of the Hereafter. He does not compel us to accept but gives us warning.

The fear factor is only beneficial if we realize how fully reliant we are on Allah. On our own, we can never be 100% right all the time. In fact, humans are more inclined to evil than good if they were not brought up conscious of God. So what is the solution?

Let us better define fear from Islamic stand point. No word better than taqwa can fit the purpose.

The word taqwa has various meanings which include God consciousness, awe or fear of Allah which inspires a person to be watchful of wrong actions and strive toward acts which please the Creator.

In this context taqwa and fear are interchangeable. Fearing Allah becomes an honorable state of a worshipper which will lead him to a much higher state than the ordinary person.

Imam Al-Ghazali said: “Fear rips away desires and maddens luxuries so that cherished sins become reprehensible, just as a honey lover is repelled by it when he learns that it has poison in it. This is how fear burns desires; disciplines the organs; subordinates the heart and gives it tranquility.

It also enables the heart to rid itself of pride, hatred, and envy; and it leaves it absorbed in it (fear). Hence, the heart becomes preoccupied with its own worries and looks towards its best interest in the long run. It is then engaged in only matters like meditation, self-analysis and struggle. It cherishes its time and moments.” (Ihya’ 4/160)

Prophet Muhammad said: “If, through fear of Allah, tears, even to the extent of a fly’s head, fall from any believer’s eyes and drop on some part of his cheek, he will be kept away from Hell by Allah.” (Ibn Majah, 4197)

We can see that “fear” is “taqwa” which is God consciousness in its true sense. But how can we reach this station?

No words or books train the heart to come to know Allah except His own words. When we contemplate and ponder over the meanings of the verses, our hearts are moved and our limbs are inclined to act upon them.

The Prophet of Islam (peace be upon him) is reported to have said: “Recite the Holy Qur’an for it will come as an intercessor for its reciter on the Day of Judgment.” (Muslim, 1)

Many of the Prophet’s companions used to take a long time finishing reciting the Qur’an because they wanted to reflect, ponder, contemplate and act upon each verse of the Qur’an. We should also do the same so that we can gain maximum benefit from each verse of the Noble Qur’an.

“O you who believe, remember Allah much. And glorify Him morning and evening.” (Al-Ahzab 33:41-2)

Train your tongue to praise and remember Him often no matter where you are and what you are doing to the point where it becomes a habit. But do not become a repeating machine. Try to ponder and contemplate over His grandeur and magnificence. He has power over all, so remember him in meekness and awe and humble yourself over His greatness and majesty.

Raya Shokatfard holds an MA in Journalism/Mass Communications and an M.A.D. in TV journalism. BA in Communication and BA in Islamic Studies. She has been Islamic propagator in the U.S and Egypt for many years and academic lecturer, writer, international presenter, consultant, foreign correspondent, and former Editor in Chief for Reading Islam website. She can be reached at: [email protected]