Allah Is Near to You! 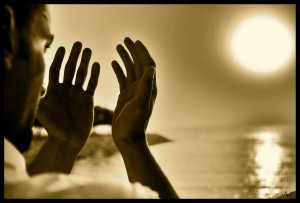 God says in the Qur’an:

There are many ways we can understand God’s nearness to us, and all of these increase our God-consciousness and strengthen our faith. One of these is that He is near to those who beseech Him and beg of Him. Prophet Muhammad (peace be upon him) was once asked: “Is Your Lord close by, so people are to commune with Him, or remote so people should call out to Him?”

In response to this question, God revealed the verse:

“And when My servants ask you concerning Me, then surely I am Near. I answer the prayer of the suppliant when he calls on Me, so they should heed My call and believe in Me that they may walk in the right way.” (Al-Baqarah 2: 186)

God is near to those who beseech Him. He relents to them in kindness and relieves them of their distresses.

“How great is the distance between heaven and Earth?”

He simply replied: “An answered prayer.”

Those who are eager to attain God’s promise to answer their prayers and relieve them of their difficulties should heed God’s call, believe in Him with all of their hearts, and guard themselves from sin. They should strive to be rightly guided. This is why the verse concludes with: “so they should heed My call and believe in Me that they may walk in the right way.”

We were with Allah’s Messenger (peace be upon him) on a journey. It was our habit when we descended into a valley to raise our voices in the praise and glorification of Allah’s name. The Prophet (peace be upon him) said: “Keep your voices to a reasonable volume. You do not call upon one who is deaf or absent. He is with you. He hears you and He is near.” (Al-Bukhari and Muslim)

These words of the Prophet Muhammad attest to the fact that God is near to His servants and answers their prayers. We also learn from this that a believer should address the Lord in a reverent, humble tone, and avoid shouting. God is also near to those who turn to Him in repentance. God says:

God informs us that the Prophet Muhammad is guided because of the revelation that he receives from God who is All-Hearing and near to His servants. This means that the guidance that humanity receives is a result of God’s nearness to them. God grants guidance and everything else in the world to whomever He pleases. He gives the good of this world to those He loves as well as those He is displeased with. However, He grants the good of the Hereafter only to those whom He loves.

These are the people He blesses with the quality of righteousness. It is from God’s nearness to His servants that He gives them guidance and keeps them on the right path. Prophet Muhammad related to us that God says in the sacred hadith: “If someone draws near to me a hand span, I draw near to that person a forearm’s length. If he draws near to Me a forearms length, I draw near to him the span of two outstretched arms. If he comes to Me walking, I come to him at speed.” (Al-Bukhari and Muslim)

See how God responds to our least effort to draw near to Him by coming ever nearer to us by blessing us with guidance, stronger faith, contentment, and certitude. How far away this is from Deism (the belief that God set creation into motion and then left us to our own affairs.) We see how near God is to us and to our concerns, guiding us and nurturing us if we but show the inclination to turn to Him. God is near to us in His attentiveness to our affairs. God says:

I Am with Someone When he Remembers Me

“Verily, we created the human being and We know what his soul whispers to him, and We are nearer to him than his jugular vein.” (Qaf 50: 16)

God says, speaking about the time of death:

“Then why do you not intervene when (the soul of the dying man) reaches the throat, but you the while (sit) looking on? We are nearer to him than you, and yet you see it not.” (Al-Waqi`ah 56: 85)

Yes, God is near to us with His knowledge and through His angels. However, His nearness should be understood to be more than metaphorical. However, we should understand His literal nearness to be such that corresponds with His divinity, not like the nearness of physical beings to one another. God is literally near to us is a manner that no way implies physical contact or a material presence. God is also near to us in His kindness and His care for all His creatures, and in the special assistance that He gives to the believers.

God is with the believers in a special way, particularly His prophets and messengers, as well as those who are righteous and God-fearing. He is with those who engage in good deeds, caring for them, protecting them, and blessing them with success. God is near to us in that to Him we must ultimately return. This is why God says about a person at the verge of death:

The person at this time is closer to the Hereafter and therefore closer to returning to God. God is near to us in our love and longing for Him. He is near to those who worship Him in the way their hearts long for Him, in the way they uphold His remembrance, and in their gratitude for Him. Their hearts enjoy a contentment and peace that comes only from their nearness to Him.

So many people who live only for the world never have the experience of such comfort and joy. They know only the physical pleasures of food, drink, and indulging their lusts. Yet, the most complete pleasure is that of nearness to God, which comes only through keeping His remembrance alive in our hearts and minds. We should teach our hearts to be more attached to God than to anything in creation. We should certainly feel close to our loved ones and friends. This is something natural and right.

However, we should always remain aware of our relationship with God, which is beyond all of our worldly attachments. This is what brings true peace and happiness to every other aspect of our lives.

God is with us when we remember Him, praise Him, and glorify His name. He is with us in His care and in the blessings that He showers upon us. Prophet Muhammad informed us that God says: “I am with someone when he remembers Me.” (Al-Bukhari and Muslim)

When we are conscious of God’s nearness to us, we become acutely aware of His divinity, which in turn enhances our worship. We begin to worship God as though we see Him, and though we do not see Him. We see Him not with our eyes, nor do we hear Him with our ears, but we do so with our hearts and minds through the intensity of our awareness of Him. At the same time, our worship of God inculcates in us the awareness of the difference between the glory of our Creator the weakness of ourselves. We feel our need for Him and how dependent we are upon Him: