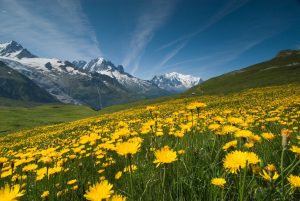 Believers keep their minds continually occupied with the remembrance of God, while the majority of humanity spend their lives without a thought to these facts.

“They do not measure God with His true measure. God is All-Strong, Almighty.” (Al-Hajj: 74)

God manifests His infinite might and knowledge in everywhere. The perfection of every part of the human body, the knowledge in the design of a flower, the beauty in its color and scent, the glory in the heavens and the universe, the order in the orbits of the planets, the fish in the depths of oceans, and the intricate design in everything you see around you, are all clear manifestations of God’s infiniteness and power.

Some disbelievers, despite perceiving God’s existence and His infinite might, deny Him out of arrogance. They do not acknowledge God’s true greatness. Because they lack wisdom, they fail to see the evident signs of God’s existence and of His greatness manifested in all beings. The inattention of these people is expressed in a verse as follows:

“How many Signs there are in the heavens and earth! Yet they pass them by, turning away from them.” (Yusuf: 105)

Only those who reflect on the purpose of the creation around them, who have a clear faculty of discernment, who apply their minds and use their conscience, can recognize the truth that which these signs imply. They are those who believe. One of the primary attributes of a believer is his ability to be perceptive.

Believers, who are capable of exercising their minds, unencumbered by false motives, come to recognize God’s artistry and power through His creation and thus have a full appreciation of His greatness and glory. A verse of the Qur’an relates that those who are able to think clearly see God’s signs wherever they turn:

“In the creation of the heavens and earth, and the alternation of the night and day, and the ships which sail the seas to people’s benefit, and the water which God sends down from the sky—by which He brings the earth to life when it was dead and scatters about in it creatures of every kind—and the varying direction of the winds, and the clouds subservient between heaven and earth, there are Signs for people who use their intellect.” (Al-Baqarah: 164)

A person so disposed recognizes the signs of God’s existence everywhere he looks, perceiving Him for His true might. Believers keep their minds continually occupied with the remembrance of God, while the majority of humanity spend their lives without a thought to these facts. In a verse of the Qur’an, the ideal behavior of a Muslim is related as follows:

“…those who remember God, standing, sitting and lying on their sides, and reflect on the creation of the heavens and the earth: ‘Our Lord, You have not created this for nothing. Glory be to You! So safeguard us from the punishment of the Fire.’” (Al ‘Imran: 191)