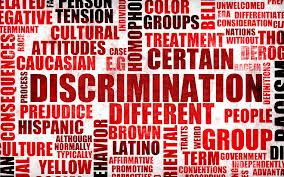 It was quite miraculous to see how the rock of discrimination began to crack when exposed to small drops of understanding.

This was an infamous racist statement made by Satan, or the Devil, in his arrogance and disobedience to Allah. The story of Satan and Adam is a clear demonstration of how dangerous racial superiority can be –it led Satan to disobey a clear order from his Creator and established his permanent place in the Hellfire.

But racial pride has far worse consequences when people act on it. Not only does it create a personality that lives a life of arrogance and deceit, but also results in criminal acts against others in the form of discrimination, enslavement, and even killing.

The issue of supremacy is an old one for humanity: some people think they are better because of their gender, clan, color, race, political position, age, and interestingly even religion. Throughout history, this ugly issue showed itself in the form of mass murder and mass enslavement, and, more subtly, in the form of discrimination.

A Turning Point in History

The world was at its worst before Allah sent Prophet Muhammad (peace and blessings be upon him). All forms of discrimination existed. In places such as Persia and India, a very unjust caste system existed, in which the majority of the people were oppressed and discriminated against because they belonged to a lower caste. In Arabia, where noble character was promoted, people were categorized based on their color and tribal affiliation. All societies, with no exception, lived a tough life of oppression due to this disease.

The Prophet Muhammad (peace and blessings be upon him) brought the final message to humanity with a cure for all of humanity’s problems, including that of discrimination. As mentioned above, the Prophet had to deal with discrimination at its worst –he was even victimized by it when the disbelievers in Makkah accused him of being a regular person and not from the “noble” people:

“And they said, had this Qur’an been sent down to a great man from the two villages, [we would have believed].” (Az-Zukhruf 43:31)

Islam’s arrival was really a turning point in the battle against discrimination. Islam was able to change people’s beliefs and behavior to a huge extent. A few decades after the death of the Prophet, leaders from all spheres of the Muslim community, whether political, scientific, or spiritual, were from different tribes and nations without regard for their color, or racial origin.

It behooves us to study how Islam was able to effect these changes.  Humanity is in dire need for such a blessed guidance to eradicate the discrimination that continues in our society today. Educators, political leaders, and community leaders have a rich pool of resources to use in the battle against discrimination.

In the remainder of this article, the author will share a few reflections about Islam’s cure for the serious problem of discrimination, in particular racial discrimination.

A Change of Beliefs and a Cure for the Intellect

The Qur’an is a cure to that which is in the heart. As Allah said,

“Mankind! Now there has come to you an exhortation from your Lord, a healing for the ailments of the hearts, and a guidance and mercy for those who believe.” (Yunus 10:57)

The first step towards fighting discrimination was to touch the hearts, change beliefs, and re-orient the intellect.

Islam built the spiritual and intellectual foundation of the believers through the divine words of the Qur’an and the eloquent tradition of the Prophet (peace and blessings be upon him). It was quite miraculous to see how the rock of discrimination began to crack when exposed to small drops of understanding.

Although simple, the ideas presented in the Qur’an and the words of the Prophet (peace and blessings be upon him) were extremely effective. An example of that is the brief speech the Prophet delivered during his last year while performing the Hajj (pilgrimage). He eloquently and concisely delivered a strong message against discrimination and racism:

O People! Listen to my words and pay attention to them, for I may not meet you again after this year.

O People! Your Lord is One. Your father is one. There is no superiority for an Arab over a non-Arab nor for a white person over a black person except by piety.

You all belong to Adam and Adam is from dust.

In the following few sections, we will reflect on a list of simple, yet strong messages that constitute the spiritual and intellectual foundations of curing racism.

Your Lord is One and Your Father is One

Monotheism is the fundamental message of Islam: “Your Lord is One.” He is the one who created all humans and created them equal. He created them from a single male and female.

“O Mankind! Be conscious of your Lord who created you from one soul and created from it its mate….” (An-Nisa’ 4:1)

The idea is repeated in the Qur’an and the words of the Prophet. The Prophet said,

“O People, Allah has elevated from you the arrogance of the era of ignorance and taking pride in family and clan… Humans are the children of Adam and Adam is from dust.” (At-Tirmidhi and Abu Dawud)

“O People, We have created you from a male and a female and we made you into tribes and nation to know one another, the best of you is the most conscious of Allah ….” (Al-Hujurat 49:13)

Although a simple message, it was foundational for fighting racism.

The short speech above brings to attention what really counts in the eyes of Allah. It is not our color, wealth, or family. It is not our physical appearance. Rather, it is our hearts and our actions. As the Prophet said above and in many other hadiths, and as Allah said in the Qur’an,

“The best of you before Allah is the person of highest taqwa (God Consciousness).” (Al-Hujurat 49:13)

“Allah does not look at your appearances or your financial status, but He looks at your hearts and your actions.” (Al-Bukhari)

Even wealth and clan have no value,

“It is not your riches nor your children that draw you closer to Allah, except for him who has faith and acts righteously ….” (Saba’ 34:37)

People like to compete with one another towards success. Islam redefined success to be that which is with Allah. The competition is not based on anything but faith and action. Even that, no one can judge except Allah. Value was removed from race, family, socioeconomic status, and was placed on righteousness and good deeds.

Beware of Arrogance: It is a Severe Sin

Racism is a vicious cycle: racism creates pride and pride feeds racism. In order for this vicious cycle to end, Allah made pride a severe sin, an atom-weight of which deprives one of Paradise. The Prophet said,

“He whose heart has an atom-weight of kibr (pride and arrogance) will not enter Paradise.” (Muslim)

He later explained kibr to his companions saying, “Kibr is rejecting the truth and looking down on people.” (Muslim)

Removing kibr from the hearts of people was like drying the substance that fuels racism.

Difference in Races is a Sign to Reflect on

Another idea that was brought to people’s attention is the scientific and artistic nature of creation. Allah says,

“And of His signs is the creation of the heavens and the earth and the diversity of your tongues and colors. Indeed there are signs in this for the men of knowledge.” (Ar-Rum 30:22)

Instead of considering race something to fuel supremacy, this verse encourages the reflective minds and hearts to think of the beauty and miracle of creation:

– How have all these races came out of one family? (genealogy)

– How did people develop into nations and tribes , all speaking different languages? (anthropology)

– How would the world look if humanity been all one race? (sociology) This positive way of thinking about race creates not only awe of Allah and His ultimate power, but also respect to people that are different.

A final fundamental point in fighting racism is banning of any form of injustice. Allah said in the divine (qudsi) Hadith

“O my servants, I made injustice forbidden on Myself and I made it forbidden amongst you; so do not commit injustice to one another.” (Muslim)

As the Prophet said in his speech above, “…your blood, wealth, and honor are sacred …” When Abu Bakr was elected to lead, he clearly stated that,

“the Day when excuses offered by the unjust shall not avail them. Theirs shall be the curse and a woeful abode.” (Ghafir 40: 52)