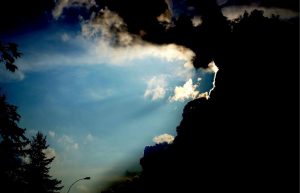 Stars and other sources of light do not all give off the same kind of emissions.

“Praise belongs to Allah Who created the heavens and the earth and appointed darkness and light…” (Al-An`am, 6:1)

We all know that without light a person cannot see his surroundings with the naked eye. However, the light that we can see is only a very small part of all light-emitting energy. There are other kinds of light-emitting energy that human beings cannot perceive, such as infra-red, ultra-violet, x-rays and radio waves. Human beings are effectively blind to such light waves.

Stars and other sources of light do not all give off the same kind of emissions. These different rays are classified according to their wavelengths. The spectrum of wavelengths is quite wide. There is a 1025 (a billion times a billion times a billion) difference between gamma rays, with the smallest size wavelength, and radio waves, which are the largest. Nearly all the rays emitted by the Sun are squeezed into just one part of this 1025 spectrum.

In order to better understand the colossal dimensions of this figure, it will be useful to make a comparison. If we wanted to count to 1025, and if we counted day and night without pause, it would take us 100 million times the age of the Earth to finish. The different wavelengths in the universe are distributed within a spectrum of just such a size. 70% of the different wavelengths emitted by the Sun are limited to a very narrow spectrum between 0.3 microns and 1.5 microns. There are three kinds of light within that band: visible light, infra-red light and ultraviolet light. Despite occupying a band less than 1 in 1025, the rays known as visible light represent 41% of all the Sun’s rays.

As has been discussed, electromagnetic waves perceivable to the human eye are responsible for only a very small part of the light spectrum. The other regions represent only darkness for human beings, who are blind to wavelengths outside that band.1

One thought on “Light and Darkness”