A Former Islamophobe Reverts to Islam 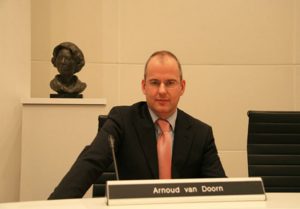 Arnoud Van Doorn is a former Dutch Islamophobe and member of the far-right, Dutch politician Geert Wilders, anti-Islam Freedom Party. He was involved in producing the film “Fitna” which argued that Islam is violent, intolerant and bent on world domination.

Van Doorn converted to Islam last year, now his son has become a Muslim too. What is it about Islam that Islamophobes are missing in the critique of the religion and its followers? What message do Muslims share with those who appeared to hate Islam? And what would make an Islamophobe turn to Islam?

With me is Dr. Shabir Ally, President of the Islamic Information Center.

Dr. Shabir: My pleasure to be on.

Q: Now, here is a remarkable story of an individual who was part of an effort to smear Islam who turns around and becomes a Muslim, and a very devout Muslim at that; his story is all over the internet on YouTube, many people have written articles about him; he recently went to Hajj; so he’s very into Islam at this point.

A: Yes, and just to clarify two things if you don’t mind, when he spoke in Toronto, he said: “I’ve never been an Islamophobe, though of course, I was part of that movement to criticize Islam.” But he didn’t elaborate further, like what’s the difference between one who criticizes in that way and an Islamophobe.

Q: Especially, when he was involved in producing this film “Fitna“.

A: Yes, and this is the other thing, one of the news articles I read about this, he said: “Actually, I wasn’t involved in producing the film, only in proliferating it; and in any case, as to adorn for that he has decided that he will produce now a film to highlight the positive aspects of the life of the Prophet Muhammad (peace be upon him).

So then to get back to your question: “What causes a person like this to turn around?” Well, as a result of that film, he naturally was approached by many Muslims who tried to show him the light and at first, he resisted this, but he went along just to see eventually how maybe he can talk some sense into the Muslims.

But when he went to the mosque, he felt a sense that somehow he was immediately displaced from his position of security, like that sense he had, something is really wrong with Islam, suddenly, he started to have doubts. He went home that day confused because he can feel that there is something beautiful about Islam; there are some peace and serenity in the mosque that he experienced now for himself.

And then he said that he couldn’t sleep that night so he went back the following day.

A: Yes, and that led to series of meetings with Muslims until eventually after a few months he embraced the religion.

So, this personal feeling of being there and experiencing the community spirit of the Muslims in the mosque is what has done it for him.

Q: It also seems as if he did his own research, like he read books, he spoke to people… and perhaps he realized that many of things that people were saying about Islam weren’t actually true.

A: Yes, to begin with, he is an intelligent man, he worked for City Council and then when Geert Wilders was starting his party, Geert Wilders invited him to work with him in starting up that party.

So he was an important Dutch politician. So he must thought about social issues, political issues, he must have read widely and then during this phase when he was thinking about Islam, he not only describes the experience that he had that changed his way of looking at things but naturally he also must have read about Islam because he describes the teachings of Islam as being wise teachings and that is not only a feeling of ‘I like it’ but this is a label that comes as a result of careful thought and research.

Q: Interesting enough, his son also converted to Islam, his fostered child and one of the things that his child mentioned is the fact that he had a friend who guided him towards Islam in a very intelligent and thoughtful and wise way.

A: Yes. Just to be clear about this, Van Doorn himself says that he doesn’t have any children that he biologically fathered but he fostered four children and the eldest of them now Iskander has embraced Islam recently at the Dubai Peace Conference and Iskander says as you’ve rightly pointed out that he had a friend who he found to be very peaceful and in fact he found the same peace with his father.

He said that after his father embraced Islam, he saw that his father is very peaceful and this friend of his invited him to become a Muslim and he accepted that invitation and that in a way shows that Muslims sometimes have to do their bit by inviting people, maybe some people out there may feel that Islam is a collection of wise teachings but nobody actually mentioned to them the possibility that, you know, you could become a Muslim formally.

Q: It is interesting when we see many people who’re attacking Islam or attacking Muslims we think that all Muslims are a lost cause there is no point in engaging with them, you know, they just hate us, that’s it for them and we’ll just stay as far away from them as possible, and in this case, here’s an indication that some people are capable of change.

Q: But sometimes it is hard because, you know, someone who has a view of Islam that’s completely different from the view that we experience ourselves so we just say where are you getting this from? So how do we engage with somebody who is, as you’ve said, an Islamophobe or perhaps, somebody who has said horrible things about Islam or Muslims?

A: Yes, I think you’ve said it rightly yourself, we shouldn’t lose hope and if we have that hope that the person can still be turned around, then we’ll find a way to present the message to this person and, at the same time, we should not lose our focus, we should not ignore the fact that there are many people out there who are not critical of Islam, there many people out there, and I started saying this earlier, who in a way are already Muslims at heart; they already feel that Islam is a great religion but nobody has invited them to be a Muslim formally.

So Muslims need to do their homework by inviting such persons whether it be workmates, outside of the work environment naturally, because you may restrictions in discussing religion at the workplace but outside the work environment, like to invite a person for dinner or cup of tea or some other social environments… Then you know, just as people make proposals for marriage or other so you just ask the person: “Have you thought of becoming a Muslim yourself…” because from what I see, you’re a very good person and to me, that’s what defines Islam… so you are already basically a Muslim… you haven’t just said it yet… are you willing to say it…?”

And that person may say “Yes, I can be a Muslim”, and what it requires is to say the shahadah (the confession of faith in Islam) that there is no god but God and Muhammad is the messenger of God and the person formally enters the Islamic faith; and one has a life changing experience then everything, you know, then has a new vision, much would remain the same but one has now a God oriented vision in life and one pursues things of the life hereafter while also at the same time being busy with the normal things that people are busy; with work, with study, with family and so on.

Q: Have you ever invited anyone to Islam in the way you’ve described just now? And has it worked?

A: Yes, and it has worked. As a case that I have in mind here is of a boy, he’s about 18 years old, I have to say a young man and he had received one of our leaflets that we’re distributing in the street. A leaflet that says the forgotten sayings of Jesus in which we showed that there are many passages in the Bible which Jesus obviously declares himself to be a servant, a messenger of God.

And when he received that and came to talk to us, I said to him eventually that “you seem that you’re already a Muslim at heart… Why don’t you embrace Islam?” and he did.

Host: Thank you for that brother, Shabir Ally.

Taken with slight modifications from onislam.net.