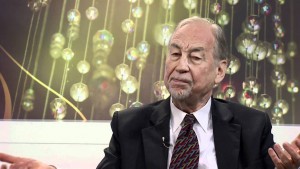 Perhaps more than all of these, what made a significant impact on his quest for the truth, was his thorough knowledge of Christian history and doctrines.

Dr. Hofmann, who accepted Islam in 1980, was born as a Catholic in Germany in 1931. He graduated from Union College in New York and completed his legal studies at Munich University where he received a doctorate in jurisprudence in 1957.

He became a research assistant for the reform of federal civil procedure, and in 1960 received an LL.M. degree from Harvard Law School. He was Director of Information for NATO in Brussels from 1983 to 1987. He was posted as German ambassador to Algeria in 1987 and then to Morocco in 1990 where he served for four years. He performed umrah (Lesser Pilgrimage) in 1982 and Hajj (Pilgrimage) in 1992.

Several key experiences led Dr. Hofmann to Islam. The first of these began in 1961 when he was posted to Algeria as Attaché in the German Embassy and found himself in the middle of the bloody guerilla warfare between French troops and the Algerian National Front who had been fighting for Algerian independence for the past eight years. There he witnessed the cruelty and massacre that the Algerian population endured. Every day, nearly a dozen people were killed – “close range, execution style” – only for being an Arab or for speaking for the independence. “I witnessed the patience and resilience of the Algerian people in the face of extreme suffering, their overwhelming discipline during Ramadan, their confidence of victory, as well as their humanity amidst misery.” He felt it was their religion that made them so, and therefore, he started studying their religious book – the Qur’an. “I have never stopped reading it, to this very day.”

Islamic art was the second experience for Dr. Hofmann in his journey to Islam. From his early life, he has been fond of art and beauty and ballet dancing. All of these were overshadowed when he came to know Islamic art, which made an intimate appeal to him. Referring to Islamic art, he says: “Its secret seems to lie in the intimate and universal presence of Islam as a religion in all of its artistic manifestations, calligraphy, space-filling arabesque ornaments, carpet patterns, mosque, and housing architecture, as well as urban planning. I am thinking of the brightness of the mosques which banishes any mysticism, of the democratic spirit of their architectural layout.”

“I am also thinking of the introspective quality of the Muslim palaces, their anticipation of paradise in gardens full of shade, fountains, and rivulet; of the intricate socially functional structure of old Islamic urban centers (madinahs), which fosters community spirits and transparency of the market, tempers heat and wind, and assures the integration of the mosque and adjacent welfare center for the poor, schools and hostels into the market and living quarters. What I experienced is so blissfully Islamic in so many places … is the tangible effect which Islamic harmony, the Islamic way of life, and the Islamic treatment of space leave on both heart and mind.”

Perhaps more than all of these, what made a significant impact on his quest for the truth, was his thorough knowledge of Christian history and doctrines. He realized that there was a significant difference between what a faithful Christian believes and what a professor of history teaches at the university. He was particularly troubled by the Church’s adoption of the doctrines established by St. Paul in preference to that of historical Jesus. “He, who never met Jesus, with his extreme Christology replaced the original and correct Judeo-Christian view of Jesus!”

He found it difficult to accept that mankind is burdened with the “original sin” and that God had to have his own son tortured and murdered on the cross in order to save his own creations. “I began to realize how monstrous, even blasphemous it is to imagine that God could have been fallen short in his creation; that he could have been unable to do anything about the disaster supposedly caused by Adam and Eve without begetting a son, only to have him sacrificed in such a bloody fashion; that God might suffer for mankind, His creation.”

He went back to the very basic question of the existence of God. After analyzing works of philosophers, such as Wittgenstein, Pascal, Swinburn, and Kant, he came to an intellectual conviction of the existence of God. The next logical question he faced was how God communicates to human beings so that they can be guided. This led him to acknowledge the need for revelations. But what contains the truth – Judeo-Christian scriptures or Islam?

He found the answer to this question in his third crucial experience when he came across the following verse of the Qur’an. This verse opened up his eyes and provided the answer to his dilemma. Clearly and unambiguously for him, it rejected the ideas of the burden of “original sin” and the expectation of “intercession” by the saints. “A Muslim lives in a world without clergy and without religious hierarchy; when he prays he does not pray via Jesus, Mary, or other interceding saints, but directly to God – as a fully emancipated believer – and this is a religion free of mysteries.” According to Hofmann, “A Muslim is the emancipated believer par excellence.”

“I began to see Islam with its own eyes, as the unadulterated, pristine belief in the one and only, the true God, Who does not beget, and was not begotten, Whom nothing and nobody resembles … In place of the qualified deism of a tribal God and the constructions of a divine Trinity, the Qur’an showed me the most lucid, most straightforward, the most abstract – thus historically most advanced – and least anthropomorphic concept of God.”

“The Qur’an’s ontological statements, as well as its ethical teachings, impressed me as profoundly plausible, “as good as gold,” so there was no room for even the slightest doubt about the authenticity of Muhammad’s prophetic mission. People who understand human nature cannot fail to appreciate the infinite wisdom of the “Dos and Don’ts” handed down from God to man in the form of the Qur’an.”

For his son’s upcoming 18th birthday in 1980, he prepared a 12-page manuscript containing the things that he considered unquestionably true from a philosophical perspective. He asked a Muslim Imam of Cologne named Muhammad Ahmad Rassoul to take a look at the work. After reading it, Rassoul remarked that if Dr. Hofmann believed in what he had written, then he was a Muslim! That indeed became the case a few days later when he declared “I bear witness that there is no divinity besides God, and I bear witness that Muhammad is God’s messenger.” That was September 25, 1980.

Dr. Hofmann continued his professional career as a German diplomat and NATO officer for fifteen years after he became Muslim. “I did not experience any discrimination in my professional life”, he said. In 1984, three and half years after his conversion, then German President Dr. Carl Carstens awarded him the Order of Merit of the Federal Republic of Germany. The German government distributed his book “Diary of a German Muslim” to all German foreign missions in the Muslim countries as an analytical tool. Professional duties did not prevent him from practicing his religion.

Once very artistic about red wine, he would now politely refuse offers of alcohol. As a Foreign Service officer, he occasionally had to arrange working lunch for foreign guests. He would be participating in those luncheons with an empty plate in front of him during Ramadan. In 1995, he voluntarily resigned from the Foreign Service to dedicate himself to Islamic causes.

While discussing the evils caused by alcohol in individual and social life, Dr. Hofmann mentioned an incident in his own life caused by alcohol. During his college years in New York in 1951, he was once traveling from Atlanta to Mississippi. When he was in Holy Spring, Mississippi all on a sudden a vehicle, apparently driven by a drunken driver, appeared in front of his car. A serious accident followed, taking away nineteen of his teeth and disfiguring his mouth.

After undergoing surgery on his chin and lower hip, the hospital surgeon comforted him saying: “Under normal circumstances, no one survives an accident like that. God has something special in mind for you, my friend!” As he limped in Holy Spring after release from the hospital with his “arm in a sling, a bandaged knee, an iodine-discolored, stitched-up lower face”, he wondered what could be the meaning of the surgeon’s remark.

He came to know it one day, but much later. “Finally, thirty years later, on the very day I professed my faith in Islam, the true meaning of my survival became clear to me!”

A statement on his conversion:

“For some time now, striving for more and more precision and brevity, I have tried to put on paper in a systematic way, all philosophical truths, which, in my view, can be ascertained beyond reasonable doubt. In the course of this effort, it dawned upon me that the typical attitude of an agnostic is not an intelligent one; that man simply cannot escape a decision to believe; that the createdness of what exists around us is obvious; that Islam undoubtedly finds itself in the greatest harmony with overall reality. Thus I realize, not without shock, that step by step, in spite of myself and almost unconsciously, in feeling and thinking I have grown into a Muslim. Only one last step remained to be taken to formalize my conversion.

As of today, I am a Muslim. I have arrived.

One thought on “Wilfried Hofmann, German Social Scientist and Diplomat”