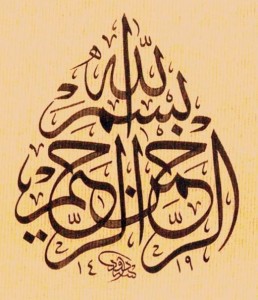 The art of every people constitutes part of their culture as well as their pride. Arabic calligraphy is the central original Islamic art, which our ancestors mastered. They perfected its scripts, designs, and decorations, turning it into a great and eternal art. Throughout history, Arabic calligraphy has reflected the essence of our Arab and Islamic art, mirroring its spirit and nature and representing its progress. Arabic calligraphy has managed to be a genuine expression of each age in the history of Arabic and Islamic art and has been a living and developing creation, passing through different stages of change and with many types.

Some of the scripts died out because of their inability to develop. Other types, however, interacted directly with the people’s’ lives, and their letters crystallized the genius of Muslim and Arabic art, reaching the climax of beauty and the peak of creativity. No other people has ever handled writing in such an artistic way. Arabic calligraphy turned into the origin of all arts, thanks to the fact that it derives its nobility and greatness from the Qur’anic verses.

However, unfortunately, while other cultures became interested in this art form, we as Arabs and Muslims overlooked this great art, which is closely related to Islam, and borrowed other arts from the West. We have almost lost touch with calligraphy’s true essence and origins.

This article is an attempt to rediscover this beautiful art, examining its origin, progress, types, tools, and figures.

THE ORIGIN OF ARABIC CALLIGRAPHY

Ancient Egyptian origin: According to this theory, hieroglyphic writing is the oldest link in the chain leading to Arabic calligraphy. This is the origin of the Arabic calligraphy now accepted in the modern age. Hieroglyphic writing, according to this theory, was changed by the Phoenicians, who turned it into the alphabet, which they taught to the Greeks in the 16th century BC. It then spread from Greece to other parts of Europe.

Modern opinion: Having reviewed different viewpoints, advocates of this opinion believe that the Arabs only became acquainted with writing in the modern ages as a result of their emigration from the center of the Arabian Peninsula to the more civilized peripheries.

In these areas, the Arabs gave up their Bedouin style and endorsed more civilized means of living. They established the Nabataean Kingdom, with Petra as its capital, and they invented a script derived from the Aramaic one. This was known afterward as Nabataean calligraphy. The Nabataean Kingdom disappeared at the end of the second century CE, but their script remained and it was used by the Arabs who moved from the north. Afterwards, Arabic calligraphy passed through different stages until it reached the current form.

ARABIC CALLIGRAPHY: FROM NOMADIC TO AN ART

Writing was highly primitive in style when the Arabs were first introduced to it. At that time, there was little stability to allow them to innovate. Arabic calligraphy did not reach the level of an art until the Arabs had a metropolitan state with competing cultural centers in Kufa, Basra, the Levant, and Egypt. Only then did Muslim artists direct their attention to Arabic calligraphy, improving it and making new innovations.

Arabs tended to name handwriting with regional names, as was the case with products. Arabic calligraphy before the age of Prophet Muhammad (peace and blessings be upon him) was known as Nabataean, Hirian, or Anbarian, as this was a result of trade interaction with these regions. Later, the two holy cities of Makkah and Madinah become centers for Arabic calligraphy named after them. Arabic calligraphy was improved and polished in Iraq and the Levant.

When the Arabs conquered these countries, they had the time to improve and renovate, and they began to have their own architecture and arts. This began when there was a need for governmental bureaus (diwan, plural dawaween). This is valid in relation to both Iraq and the Levant. During the Umayyad Dynasty, there was an expansion of the state and Damascus became the capital. The Umayyad Dynasty was known for its luxury and tendency toward urban development; therefore, it witnessed a steady movement of construction, with a special architectural spirit that was also reflected in the writings that appeared on utensils and in the writing and decoration of the Qur’an.

During the Abbasid Dynasty, handwriting was improved even further; calligraphy blossomed and varied with each region having its own type of writing. It is worth mentioning in this regard that pens were named according to their proportions to standard pens. The standard pen was measured by putting together twelve hairs of a certain animal. That was the standard thickness of the pen and the derivatives from that pen were called by their proportion to the original, such as al-thuluth pen (literally meaning a third).

Scripts were named according to the purposes they served, such as the Signatory script; or by reference to its innovator, such as Al- Ra’isi (presidential) script. By this time, scripts were rarely named after the cities where they were invented. Scripts of the Abbasid Dynasty followed a system similar to the Egyptians, who had three types of scripts—Clerical Hieroglyphic, Bureaucratic, and Popular—each named according to its function.

Many of these handwriting styles disappeared, but other kinds are still used today. We will illustrate some of the most important types of Islamic calligraphy, their description, and their use. 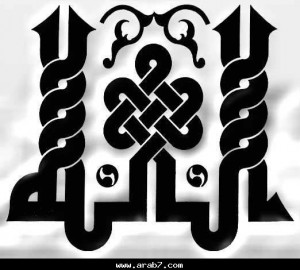 This script was used by the caliphs in signatures and in writing to sultans.

There was also the Tumar Minor, which was used in the accreditation of ministers and representatives, and in ceremonies. Various pens were used for these scripts.

The two-thirds pen was used for the caliph’s writings to his deputies and princes.

The ceremonial pen was used for recording the consultations and discussions of the princes.

The treaties pen was for the writing of treaties and pacts.

The Jarim pen was for princesses’ writings.

The Ghubar Al-Hilya (Dust of Ornamentation) pen was used for writing messages to be taken by carrier pigeon.

THE KUFI SCRIPT: FLEXIBLE AND ACCURATE

As stated, the Kufa paid special attention to this firm script, polishing and decorating its letters. This script was thus known as the Kufi script and it mainly goes back to Hiri or Anbari calligraphy. It was called Kufi handwriting as it spread from the Kufa to other parts of the Islamic world with the conquerors in the blooming age of Kufa.

1. Solid heavy script. This is known as the ceremonial script or al-khat al-tizkari, which was normally written on solid materials such as stone or wood. It was known for its beauty and decorative nature. Sometimes it avoided any points or association between the letters.

2. Flexible script. This script is easy to write. This style of handwriting moved away from the Madinah script to the Kufa. It was known as the editorial script because it was used for correspondence, registrations, and writings.

The combination of both kinds of handwriting brought about a third type, which was known for its beauty and elegance; this was the handwriting that was used in writing the Qur’an and it combines both firmness and flexibility. It remained the favorite script during the first three centuries of Islam. Several artistic and decorative kinds were derived from the Kufi script and were divided by the historians of Islamic art into the following types:

1. The Simple Kufi script, which is a plain script with no leaf-like ornaments, adornment, or plaiting. This script spread in the nascent Islamic world and remained the most favored style of handwriting in the western Islamic world until later ages. Chief among these examples are the writings found on the top of the Dome of the Rock in Jerusalem.

2. The Vegetal script, which has leaf-like decorations, its letters ending with vertical strokes. This type blossomed in Egypt and spread to both the east and west of the known Islamic world.

3. The Connected Braided Kufi script, whose ornamentation accompanying it is highly complicated to an extent that makes it sometimes difficult to distinguish between the elements of the script and the ornamentation. Letters of the same word may be braided, and sometimes two words or more are joined in a beautiful framework of braiding.

4. The Geometric Kufi, known for its straight elements, acute angles, and geometric features. This form of Kufi script is prevalent in Iran and Iraq. It is a purely decorative kind of handwriting, and the intertwining of its letters sometimes makes it difficult to decipher the sentences.

Ahmed Ebeed was the head of Information Unit in IslamOnline.net (IOL). He has a deep interest in Arabic calligraphy.