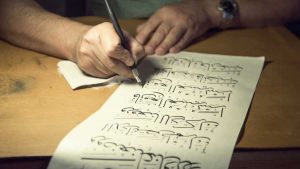 How to Read Islamic Calligraphy

This is an absolutely marvelous and fascinating book. It was sorely needed to fill a much felt void. This book offers new perspectives on an art form that has mesmerized viewers for centuries with its beauty, sophistication, and seemingly endless variety of styles. The book is authored by Dr. Maryam D. Ekhtiar, Associate Curator, Department of Islamic Art, The Metropolitan Museum of Art, NY, NY.

Combining engaging, accessible texts with stunning new photography, How to Read Islamic Calligraphy introduces readers to the major Islamic script types and explains the various contexts, whether secular or sacred, in which each one came to be used. Beauty and brilliance emerge in equal measure from works of every medium, from lavishly illuminated Quran manuscripts, to glassware etched with poetic verses, to ceramic tiles brushed with benedictions. The sheer breadth of objects illustrated in these pages exemplifies the ubiquity of calligraphy in the arts of Islam and the vitality of its role in Islamic culture. 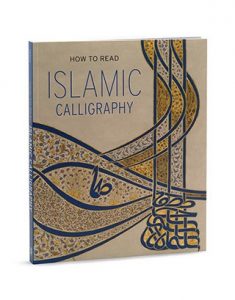 The author explains how the sheer beauty of Islamic Calligraphy that appears in myriad forms and styles, ranging from elegant and refined to decorative, and from eminently readable to abstract and barely legible. It is remarkable for its pervasive use as a mode of ornament on architecture and objects in an array of media. As such, the calligraphic art form reaches far beyond its fundamental function as a vehicle for written communication. Indeed, no other culture has explored the decorative and creative possibilities of the written word as extensively as Islam.

Explaining about the early Qurans, the author starts off by explaining that the Arabic alphabet consists of eighteen primary letter forms (rasm), mostly consonants and long vowels, that with the help of dots (i‘jam) and diacritical (accent) marks express twenty-eight phonetic sounds. Early manuscripts of the Quran were written with a reed pen on parchment and generally penned in kufic, a script known for its thick, angular, and minimal forms, its clarity, and the horizontal extension of letters along the baseline. Many early Qurans were devoid of both i‘jams, which phonetically distinguish letters of similar shape, and short vowel marks, which aid pronunciation. As the text of the Qur’an was often memorized, not read word for word, such copies served as aide-mémoire for oral recitation.

The introduction of paper from China in the eighth century and its widespread use led to the development of new, more readable scripts. The “new Abbasid style,” or “new style,” is characterized by the extreme verticality of the shafts of the letters, sharp angular forms, a contrast between thick and thin strokes, and the consistent application of diacritical and vocalization marks.

The tenth-century Abbasid vizier and calligrapher Abu ‘Ali Muhammad ibn Muqla developed a proportional writing system of calibrated letters. Basing the system on two geometric shapes—a circle with the diameter of the letter alif and the rhomboid dot created by the stroke of the nib of a reed pen (see diagram)—he canonized the six classical cursive scripts (the aqlam al-sitta): naskh, thuluth, muhaqqaq, rayhan, tawqi‘, and riqa‘. Each script was suited to a particular purpose. For instance, naskh was ideal for copying books and small Qurans while thuluth and muhaqqaq were appropriate for large Qur’ans, objects, and architectural surfaces.

Some scripts remained tied to a particular region, but others were adopted widely. For example, maghribi was exclusive to Spain and North Africa, whereas nasta‘liq, an elegant and lyrical script that originated in Iran and Central Asia, spread eastward to Mughal India and westward to Ottoman Turkey.

Above: Page 9 from the book showing the six classical cursive scripts, and the Regional scripts. 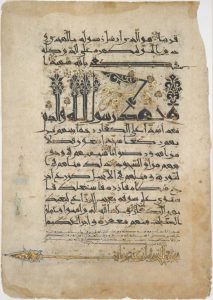 Above: Page 30 of the book: Folio from a Quran in playful floriated script, Iran or Central Asia, Seljuq, 11th century, ink, opaque, watercolours, and gold on paper, demonstrating the balancing act performed by the calligrapher who sought to highlight the importance of design and composition while communicating the content of the sacred verses. 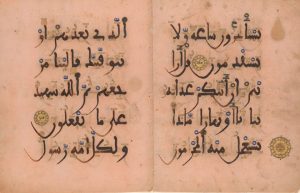 Above: Pages 56-57 of the book: Bifolium from the Andalusian “Pink Quran” in Maghribi Script, Spain, possibly Granada or Valencia, ca. 13th century, Ink, gold, silver, and opaque watercolor on paper. This bifolium belongs to a luxurious Quran named for the pinkish hue of its paper, which may have come from Jativa, reportedly the site of the first paper mill in Spain. The verses are penned in a bold maghribi script in dark brown ink with gold diacritical and vocalization marks outlined in brown, blue, and green. Pause and prostration marks take the form of disks and teardrops. The format is unusual, as most Spanish Qurans were square and written on parchment rather than on paper. 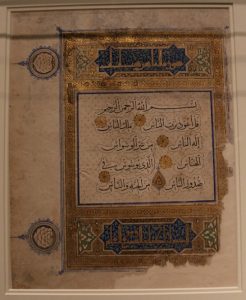 Above: Page 81 of the book: Folio from the Quran in Naskh script, early 14th century, Iran. The decorative vocabulary of the illumination, the copious use of gold, and the types of flowers depicted reflect the prominence of Chinese derived motifs in the art of book illumination in 14th century Iran.

The book is lavishly illustrated with colored photos of absolutely stunning and extremely rare folios taken from across the Islamic world- courtesy of the world-famous New York Metropolitan Museum of Art. It is published by The Metropolitan Museum of Art and distributed by Yale University Press. Printed in Italy on quality paper, this is a must-have for every library and would be an ideal gift for any occasion.