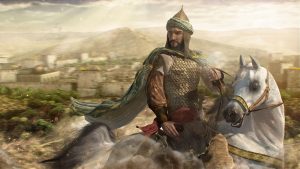 I only want a righteous woman who would help me enter Heaven (Jannah); who gives birth to my boy child who would be properly educated by her until he becomes a great knight who would restore Jerusalem to Muslims!

Is there anyone who does not know Salah Al-Din (known to westerners as Saladin)?! He is Salah Al-Din Al-Ayyubi, the great Muslim leader and commander who led Muslim armies to liberate Jerusalem and the Aqsa Mosque from the Crusaders on 2 October, 1187 AC (27 Rajab, 583 AH).

Indeed, the story of his parents’ marriage was as amazing as his own character and achievements. His father, Najm Al-Din Ayyub, Emir of Tikrit (City in Iraq), did not get married and stayed as a bachelor for a long time.

As a sign of true concern, his brother, Asad Al-Din Shirkuh once asked him: O brother! Why do not you get married?

Asad Al-Din said: Let me ask for someone’s hand in marriage on your behalf.

Najm Al-Din asked: Who is she?

Asad Al-Din said: Either daughter of the Seljuk Sultan Malik Shah, or that of Wazir Al-Mulk, the Grand Vizier.

Najm Al-Din said: They are not suitable for me!

Asad Al-Din was amazed at his answer but further asked: And who is it that suits you?!

Najm Al-Din replied: I only want a righteous woman who would help me enter Heaven (Jannah); who gives birth to my boy child who would be properly educated by her until he becomes a great knight who would restore Jerusalem to Muslims!

That was his dream!!!

Notwithstanding, Asad Al-Din did not like his brother’s words and remarked: Where would you find such a woman?!

Confidently and assuredly, Najm Al-Din answered him as saying: Allah the Almighty accomplishes the desires of those who purify their intention (niyyah) for Him, Glory be His.

After a while, Najm Al-Din was once having a conversation with a Muslim scholar in one of Tikrit’s masjids (mosques) when a young woman came in and called upon the Muslim scholar from behind a curtain. The scholar asked for Najm Al-Din’s permission to attend to her and Najm Al-Din heard the following dialogue:

The Muslim scholar: Why did not you accept the man I sent to your house to propose to you?

The young woman replied: O Muslim scholar! He is a man of excellent qualities, good looking and high social status; however, he is not the right person for me!

The Muslim scholar asked: What do you want then?

The young woman replied: My dear Muslim scholar! I only want a righteous man who would help me enter Heaven (Jannah); to beget him a child whom I would educate well until he becomes a great knight who would restore Jerusalem to Muslims!

These were just the same words as previously pronounced by Najm Al-Din in answer to his brother’s thoughtful and passionate inquiries!

Najm Al-Din refused to get married to any of the two daughters of a sultan and a grand vizier regardless of their natural beauty or noble social status and wealth!

Similarly, the young woman refused to get married to the man who had all known excellent characteristics as well as lofty social status, wealth and good-looking.

However, the question that begs answering is: why?!

Simply because both of them wanted someone who would take the other by the hand to Heaven; to have a unique son who would become a courageous knight who would eventually restore Jerusalem to the fold of Islam and the dominion of Muslims.

Surprisingly, the Muslim scholar remarked: She is only a common poor young woman!

Najm Al-Din said: That is the woman of my dreams!

Najm Al-Din got married to that young woman whose name was Sit Khatun and the dream became real. Indeed, Allah the Almighty gives everyone in accordance with their intention. Afterwards, Salah Al-Din was born to them and he later became the long-awaited great knight who gained victory over the Crusaders and restored Jerusalem to the Muslims by Allah’s Grace. One can say that he was born of good intentions.

This story represents a glimpse of the great history of Islam and the deep-rooted legacy of Muslims. Indeed, this is what should be taught to our children and the whole world to let them all know and understand something about Muslims and their great unprecedented legacy and glory and the make-up of the true and faithful Muslim character throughout the ages.