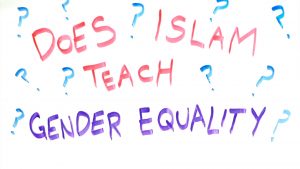 Islam affirms the absolute spiritual equality of men and women, and assigns both an equal rank before God.

Islam recognizes that while men and women have some physical differences, spiritually they enjoy absolute equality before God. The Qur’an and Sunnah are unequivocal in stating that one’s gender will have absolutely no bearing on their reward or punishment in the next life.

“I shall not lose sight of the labor of any of you who labors in My way, be it man or woman; you proceed one from another…” (Al `Imran 3:195)

“If any do deeds of righteousness,- be they male or female – and have faith, they will enter Heaven, and not the least injustice will be done to them.” (An-Nisa’ 4:124)

“Whoever works righteousness, man or woman, and has Faith, verily, to him will We give a new Life, a life that is good and pure, and We will bestow on such their reward according to the best of their actions.” (An-Nahl 16:97)

“He that works evil will not be requited but by the like thereof: and he that works a righteous deed – whether man or woman – and is a Believer- such will enter the Garden (of Bliss): Therein will they have abundance without measure.” (Ghafir 40:40)

“O mankind! We have created you from a male and a female, and made you into nations and tribes, that you may know one another. Verily, the most honorable of you with God is the most pious. Verily, God is All-Knowing, All-Aware.” (Al-Hujurat 49:13)

Therefore, Islam openly declares that men and women have an equal status and value before God, and piety alone differentiates one individual from another.

In legal and practical aspects, the general rules are the same for men and women. Both have the same acts of worships, the same Islamic etiquette and manners, and are subject to the same legal penalties. But there are also many cases where the rulings are different. Women are exempted from fasting and prayer during their period. Men are prohibited from wearing gold and silk while women are allowed to, as it is women’s nature to beautify themselves. Friday prayers are obligatory for men but optional for women. Men must spend their money on the family but a woman’s money is entirely her own to spend as she chooses. There are differences in clothing requirements as well, since the physical appearance of men and women is dissimilar. All of this is reflective of the natural differences between men and women. So in lesser jurisprudential matters, Islam treats men and women according to their inherent differences as per substantive equality and in the interest of justice.

One thought on “Concept of Gender Equality in Islam (P. 2)”