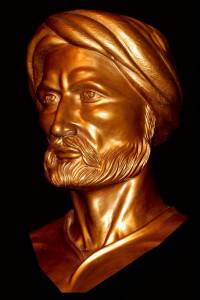 The enforcement of property rights, the protection of trade routes and the security of peace are necessary for any civilized society to engage in trade and production.

Ibn Khaldun (d. 1406/808) was a fourteenth century, Tunisian born Muslim thinker who wrote on many subjects including on the rise and fall of nations in his Muqaddimah: An Introduction to History. His writings on economics, economic surplus and economic oriented policies are as relevant today as they were during his very own time.

Ibn Khaldun was the first to systematically analyze the functioning of an economy, the importance of technology, specialization and foreign trade in economic surplus and the role of government and its stabilization policies to increase output and employment. Ibn Khaldun, moreover, dealt with the problem of optimum taxation, minimum government services, incentives, institutional framework, law and order, expectations, production, and the theory of value. Ibn Khaldun again is the first economist with economic surplus at hand, who has given a biological interpretation of the rise and fall of the nations. His coherent general economic theory constitutes the framework for his history.

Ibn Khaldun on the State

Since the State has important functions in the social, political and economic life of a nation, the role and the nature of the state has to be clarified for the well-being of society. For Ibn Khaldun, the role of the State is to establish law and order conducive for economic activities. Moreover, the enforcement of property rights, the protection of trade routes and the security of peace are necessary for any civilized society to engage in trade and production. The economic surplus could increase in a situation where governmental policies favor economic activities. Government should take a minimum amount of surplus through taxation in order to provide minimum services and necessary public works. For Ibn Khaldun, optimum taxation occurs when governments do not discourage production and trade through taxation.

For Ibn Khaldun, the State has to take the responsibility to change the expectations of the entrepreneurs by implementing the public works to generate employment and confidence. As a part of the stabilization policy, the State should build roads, trade centers, and other activities that encourage production and trade. But “the direct interference of the State in economic activity by engaging in commerce,” would cause the decline of the State and the economic activities. The interference of the State in commerce, by itself, will increase bureaucracy and mercenary army. As a result of governmental interference in commercial and economic affairs, the entrepreneurs would be prevented to trade and invest and make profits in their enterprises.

Ibn Khaldun has dealt with economics, sociology, political science and other subjects in order to understand the behavior of man and his history. He indicated the fact that specialization is the major source of economic surplus, almost three centuries before Adam Smith. For Ibn Khaldun, when there is an environment conducive for specialization, the entrepreneur is encouraged to commit himself for further trade and production. Indeed, specialization would occur in a place in which a person is able to get the benefit of his efforts.

Given law and order, for him, specialization is a function of population, trade, production and minimum taxation. On specialization, this is what he says:

“Each particular kind of craft needs persons to be in charge of it and skilled in it. The more numerous the various subdivisions of a craft are, the larger the number of the people who (have to) practice that craft. The particular group (practicing that craft) is colored by it. As the days follow one upon the other, and one professional coloring comes after the other, the crafts-coloring men become experienced in their various crafts and skilled in the knowledge of them. Long periods of time and the repetition of similar (experiences) add to establishing the crafts and to causing them to be firmly rooted.”

For Ibn Khaldun, specialization meant the coordination of different functions of factors of production where, “what is obtained through the cooperation of a group, of human beings satisfies the need of a number many times greater (than themselves).”

Later, on the same subject, Adam Smith had this to say: “Thus, generally, to the value of the materials which he works upon, that of his own maintenance, and of his master’s profit.” However, more succinctly, Ibn Khaldun states the economic rationale behind specialization (and coordination) with this sentence “the combined labor produces more than the needs and necessitates of the workers.” On the same subject, he states the fact that “through cooperation, the needs of a number of persons, many times greater than their own (number) can be satisfied.” For Ibn Khaldun, providing coordination and cooperation of factors of production is a function that has to be performed by entrepreneurs according to market forces.

Ibn Khaldun considers both the workers and the entrepreneurs as respected members of the society who try to maximize the return for their activities in the form of wages and profits. For him, the profit is the primary motive of economic endeavor, since the expectation of profit leads to the expansion of production. Moreover, “Commerce means the attempt to make a profit by increasing capital, through buying goods at a low price and selling them at a high price.” In other words, “the truth about commerce” is to “buy cheap and sell dear.”

For Ibn Khaldun, it is clear that “the profit human beings make is the value realized from their labor,” but this value, the price of labor, is determined by the law of supply and demand. These points were missed by Karl Marx and his ardent followers.

For Ibn Khaldun, the coordination, cooperation and direction of factors of production in increasing economic surplus is a productive and costly process which is undertaken by entrepreneurs who try hard to make a gain for their economic activities. They spend time, energy and capital to search for goods and services “to buy cheap and sell dear,” in order ‘to make profit.” As a result, Ibn Khaldun praised the initiative of entrepreneurs for their productive activities in coordinating and directing of factors of production. Then, they very rightly deserved profit from their risky undertakings. Karl Marx, Ricardo and others went astray on this point as well.