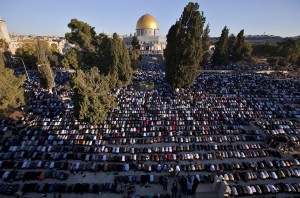 Allah the Almighty blessed the Muslim nation with Eid Al-Fitr and Eid Al-Adhha that sufficed them and left them in no need of any of the festivals of the pre-Islamic era.

The two Eids are associated with great acts of worship and rites, such as fasting, Zakat-ul-Fitr, (post-Ramadan obligatory charity) Hajj and Udhhiyah (sacrificial animals).

These rites bring the Muslim closer to Allah the Almighty, such as the Takbeer (saying ‘Allahu Akbar’ (Allah is the Greatest), the Eid Prayer and its Khutbah (sermon). This is contrary to the disbelievers’ festivals which combine various rituals of disbelief and misguidance and include activities that are based on desires and misconceptions.

Righteousness, kindness and mutual support are shown by the payment of Zakat-ul-Fitr and the giving away the meat of Hady and Udhhiyah (sacrificial animals). None of the two Eids has any connection with the other false beliefs, such as the stars, memorials, or sanctification of human beings, ethnicities and nationalism.

Abu `Ubayd, the freed slave of Ibn Azhar, said, “I witnessed the Eid with `Umar ibn Al-Khattab, may Allah be pleased with him, and he said, ‘These are two days which the Messenger of Allah (Peace and blessings be upon him) forbade us from fasting: the day when you end your fast (of Ramadan) and the other day when you eat of your sacrifices.’” [Al-Bukhari and Muslim]

It was narrated on the authority of Abu Sa`eid, may Allah be pleased with him, that he said, “The Prophet (Peace and blessings be upon him) forbade us from fasting the day of ending the fast [i.e. Eid Al-Fitr] and the day of slaughtering [i.e Eid Al-Adhha].” [Al-Bukhari and Muslim]

It was narrated on the authority of Ibn `Abbas, may Allah be pleased with him, that the Prophet (Peace and blessings be upon him) went out on the day of [Eid] Al-Fitr and performed two Rak`ahs (units of prayer) with no prayer before or after them. [Al-Bukhari and Muslim]

It was narrated on the authority of Umm `Atiyyah, may Allah be pleased with him, that she said, “The Messenger of Allah (Peace and blessings be upon him) ordered us to bring out the adolescent girls, menstruating women and the virgins on Eid Al-Fitr and Al-Adhha, but (stated that) the menstruating women should keep away from the prayer place and witness the goodness and the Muslims’ gathering and supplications.” [Al-Bukhari and Muslim]

During such blessed occasions, women’s non-observance of proper Islamic covering, intermixing with men, forms of extravagance in clothing, food and celebrations, and prevalence of musical instruments and singing are signs of neglecting religious obligations and being ungrateful for the blessing of Eid.

Muslims should gather for having food together on Eid because this conduct highlights the rite of Eid, creates harmony and brings hearts together on this great day.

There is no harm in exchanging congratulations on Eid. It was reported that when the righteous predecessors, may Allah have mercy upon him, met on the day of Eid, they would congratulate one another, saying, “May Allah accept it from you and us.” The terms of congratulation may differ according to people’s traditions, countries and eras so long as they do not involve prohibited words or imitation of the disbelievers. It is not permissible to congratulate with the words that the disbelievers exclusively use in their festivals.