Europe: The Seeds of the Renaissance 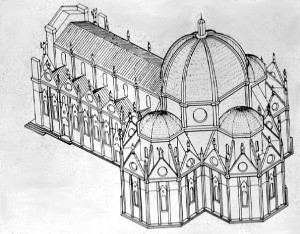 Islam encourages the gathering of knowledge and the use of reasoning. In the Qur’an, God repeatedly urges humans to use their intellect and thinking skills so that they may differentiate between truth and falsehood. Allah Almighty says:

Will they not ponder the Qur’an? If it had been from other than Allah, they would have found many inconsistencies in it. (Al-Nisa’ 4: 82)

Furthermore, Islam is a universal religion – not for a few chosen people or tribes, but for all people and for all times.

With this collective and inclusive outlook, Muslims began to gather any and every scholarly work they could lay their hands on – be it Greek, Persian, or Indian – as the Islamic Empire grew. They, then, commenced the scrupulous task of translation and, afterwards, busied themselves in its study. Moreover, they initiated the procedure of verifying ancient beliefs and often postulated alternate theories regarding core issues, complete with extensive testing of their ideas. In fact, the scientific process of observation, hypothesis, experimentation, and conclusion was first fully introduced by the Muslims.

For instance, Ibn al-Haytham (c. 965-1039), who studied light and wrote The Book of Optics, believed that human beings are flawed and only God is perfect. To discover the truth about nature, Ibn al-Haytham, a devout Muslim, reasoned that one must eliminate human opinion and allow the universe to speak for itself through physical experiments. “The seeker after truth is not one who studies the writings of the ancients and, following his natural disposition, puts his trust in them,” he wrote. “But rather the one who suspects his faith in them and questions what he gathers from them, the one who submits to argument and demonstration.”

Spain and Sicily provided two major points of contact between Muslims and the rest of Europe. Interaction between Muslims of these two states and the rest of the Western European bloc took place as a result of Crusades and other battles, alliances, and intellectual pursuit. In fact, Spain became the prime channel through which advancements in a variety of fields from all over the Muslim world reached Western Europe. Some westerners visited Spain and were enthralled by its beauty, commitment to scholarship, and convivencia. They decided to stay, learned Arabic, and began translating Muslim scholarly works into Latin. Gerard of Cremona (c. 1114–1187) was a prolific translator who translated some 87 Arabic books into Latin, including the texts of al-Khwarizmi, al-Farabi, ar-Razi, among others. Michael Scot (c. 1175 – 1232) was another such individual who went on to become the librarian for King Frederick II’s vast collection of Arabic works in Sicily.

Such exchange facilitated the transfer of knowledge from Spain into the rest of Western Europe.