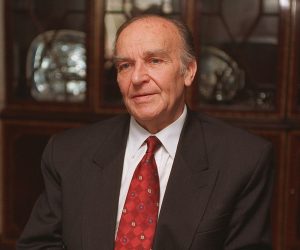 With the collapse of the federal system in Yugoslavia in 1990, Izetbegovic was released subsequently to find himself and his people caught in the implosion of a genocidal war.

Alija Izetbegovic was born in 1925 in northwest Bosnia – a corner of Europe with a predominately Muslim population but a regime that censured the practice of Islam. As a founding member of the Mladi Muslimani (Young Muslims) at the Sarajevo Gymnasium and then as a law student at Sarajevo University, Izetbegovic took up the rights of Muslims to practice their faith. He became fluent in foreign languages (German, French and English) in order to understand more about the history and struggle of Muslims throughout the world.

In 1945, the communist dictatorship of Josip Tito abolished all non-communist groups and arrested their leaders. Izetbegovic spent ten years in prison, when he was released he practiced commercial law, but found an outlet for his activism through writing. He was arrested again in 1983 for allegedly seeking to revive the Mladi Muslimani and, after a farcical trial, sentenced to 14 years imprisonment. During this time his manuscript, Islam Between East and West, was smuggled out of prison. Written in the most trying of conditions, it nevertheless told of the need to reactivate intellectual confidence amongst Muslims.

With the collapse of the federal system in Yugoslavia in 1990, Izetbegovic was released subsequently to find himself and his people caught in the implosion of a genocidal war. As leader of the Democratic Action Party, Alija Izetbegovic was elected President of Bosnia-Herzegovina, heading a three-member presidency until his resignation in October 2000. Throughout his life, in word and in deed, Alija Izetbegovic has demonstrated outstanding courage and remarkable compassion to secure the rights of Muslims to lead meaningful and peaceful lives.

To the end he remained a giant figure on the country’s political stage. For most Bosnian Muslims and a few ethnic Serbs and Croats who support Bosnian independence, his death will be an occasion for mourning.

Mr. Izetbegovic founded the Party of Democratic Action (SDA) in 1990 as a vehicle for views he honed as a dissident intellectual under Yugoslav communist rule. His SDA became a powerhouse during the war, when it became known internationally as the leading party of Bosnian “Muslim nationalists”. Mr. Izetbegovic defied the epithet, accepting the term “Islamist” but calling the “nationalist” label inappropriate.

“Pan-Islamism always came from the very heart of the Muslim peoples; nationalism was always imported stuff,” he wrote in a 1973 book on Islamic politics.

But the former president’s politics turned bitter toward the end of his life, as he saw only part of his plans for Bosnia realized.

He was disappointed during the Dayton peace talks at the war’s end, when international mediators forced him to negotiate on equal footing with Mr. Milosevic and Mr. Tudjman, whose military forces he viewed as Bosnia’s invaders.

Under Dayton’s terms, the country of 4m people remains divided along ethnic lines, with two administrative zones: one largely controlled by Muslims and ethnic Croats, the other dominated by ethnic Serbs. Partition was the price of peace. Mr. Izetbegovic called it “a bitter but useful pill”.

Alija Izetbegovic will be best known as the President who single-mindedly struggled for a just end to the conflict which ravaged his country. In the face of betrayal by Europe, which had lapsed on its fifty year old promise of ‘never again’ as concentration camps once more sprang up in its midst, he tirelessly campaigned for justice at home and abroad. He was a man who sought to live his life by the highest of principles. As a prisoner of conscience in the 1980s he once wrote, ‘When I lose the reasons to live, I shall die.’

It was his principles, for which he resigned his position as President in 2000, announcing that the international community was pushing things forward in a manner with which he could not live.

Alija Izetbegovic, hero of Bosnian Muslim resistance during the siege of Sarajevo who led his country to independence from the genocidal campaign of Yugoslavia, died in Sarajevo on Sunday, October 19, 2003 at the age of 78.

Alija Izetbegovic was one of those rare individuals who managed to both inspire and lead a whole nation in its pursuit of freedom, winning the admiration of people the world over. He leaves behind a legacy spanning two centuries, which includes his esteemed career as a lawyer, activist, politician, freedom fighter and scholar.