How Does Islam Teach Arabic to Its English Speaking Followers in Canada? 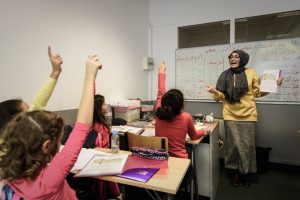 How Does Islam Teach Arabic to Its English Speaking Followers in Canada?

The below question and answer are just a sample of the questions that were sent to the Editor after a 5-week course titled, “Islam 101: Between Myth and Reality” that was delivered by the Editor to students of the Ottawa School of Theology & Spirituality, located at the Dominican University College, Ottawa, Ontario, Canada.

The other questions and answers will be published one at a time subsequently.

When I was growing up the Jewish students in my public school went to Hebrew classes in the synagogue after 4:00 pm one afternoon a week. How does Islam teach its English speaking students in Canada Arabic so that they learn the true meaning of Scripture?

In the Name of Allah, Most Gracious, Most Merciful.

Thank you, dear G. J., for your question.

There are 1.8 billion Muslims in the world; about 24.1% of the world population. Only 15% are Arabs which means that most of the remaining 85% do not speak Arabic. Still, they need to understand the fundamental sources of Islam, namely the Qur’an and the Traditions of the Prophet. Surely, they can resort to translations of the original Arabic texts. However, this is not enough for two main reasons:

Given the above, non-Arabic speaking Muslims should endeavor to learn the Arabic language, especially the children and youth. As the task is not that easy, they are not left alone. Many institutions, here in Canada, provide such services for either free or with a symbolic fee.

Foremost among these institutions are the mosques. Nearly in all mosques, one can find at least one weekend school for teaching Arabic, if not more. Many mosques which I have visited and participated in the teaching of the Arabic language there have more than one Saturday and/or Sunday school. They are managed and attended to by mostly volunteers.

Another source is the Islamic schools which offer Islamic studies as well as the Arabic language to their students besides the Canadian curricula. These services are not limited to their registered students but also extend to serve other members of the community.

Besides the mosques and Islamic schools, many non-profit Islamic institutions offer similar services to Muslims.

As for pre-schoolers (3-5 year of age), their Muslim parents shoulder the responsibility of introducing them to the Arabic language through teaching them short chapters (surahs) of the Qur’an, oft-repeated supplications in Arabic, memorable Arabic baby songs, etc., to make them accustomed to hearing and using the Arabic sounds, alphabet and basic simple expressions.

Remarkably, the matter does not stop at this point, as academic and professional Muslims, including the author of these lines, volunteer with public institutions such as the Ottawa Public Library to provide Arabic classes for non-Muslims who are interested in learning the language as they can get the flavor the Muslim culture through learning the language of Islam.

I hope this will answer your question.