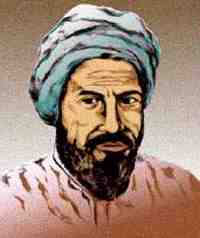 He was an extremely learned, multi-talented scientist, and a pioneer in medicine. Through his researches and discoveries, he managed to surpass his contemporary scientists and even those who came after him. He, alone, managed to write the largest medical encyclopedia in history.

He is the scientist and physician, `Alaa’u Al-Deen `Ali Ibn Abul Hazm, known as Ibn Al-Nafees.

His Birth and Early Years

His early life and seeking knowledge

`Alaa’u Al-Deen `Ali Ibn Abul Hazm Al-Qurashi was born in Damascus in 607 A.H (1210 A.C.) He started seeking knowledge in his early years. He memorized the Glorious Qur’an, learned how to read and write, and studied jurisprudence, Hadith, and the Arabic language. Then, he directed his efforts to the study of medicine and his teacher was Muhadhab Al-Deen `Abdur-Rahim `Ali who was known as Al-Dikhwar. This teacher was one of the most famous ophthalmologists. He was also manager of the Noori Hospital in Damascus and head of the physicians in Syria and Egypt. In the Noori Hospital, the giant corporation established by Noor Al-Deen Mahmood Ibn Zinki, Ibn Al-Nafees studied medicine and his teachers were the two famous physicians Al-Muhadhab Al-Dikhwar and `Imran Al-Isra`ili who taught many of the well-known physicians of that time.

Back then, Damascus was ruled by the Ayyoobid Dynasty who paid a lot of attention to science and knowledge. They made Damascus and Cairo, as well as other cities under their control, great centers of knowledge which received students and scholars from all over the world. After spending a short time studying medicine, Ibn Al-Nafees became a skillful physician whose knowledge and experience was equal to that of his great teachers, and he became famous everywhere.

His stay in Egypt

In Cairo, in 633 A.H. (1236 A.C), Ibn Al-Nafees traveled to Egypt and stayed in Cairo, the capital of the Ayyoobid State. Ibn Al-Nafees joined the Naasiri Hospital which was established by Sultan An-Naasir Saladin Al-Ayyoobi in 577 A.H. (1181 A.C.) Ibn Al-Nafees worked in the hospital as a physician, and later as a teacher of medicine. Owing to his studious nature and excellence in medicine, he became head of the Hospital and manager of its Medical school. Some years later, he moved to work as head of the Mansoori Hospital which was established by Sultan Al-Mansoor Ibn Qalawoon in 680 A.H. (1281 A.C.). Ibn Al-Nafees occupied several positions until he became the physician of Sultan Al-Dhahir Beibers. Ibn Al-Nafees was famous throughout the whole country. He led a life of affluence in Cairo. He built a spacious house and allocated part of it to be a library which was full of reference books in all fields of knowledge. In this place, Ibn Al-Nafees used to meet the most well-known scientists, princes, high ranking people, and students in order to study issues related to medicine, jurisprudence, and language. 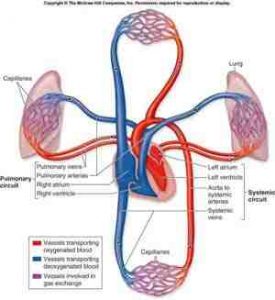 For several centuries, scientists of medicine from all over the world were of the opinion that the first scientist to discover blood circulation was the British doctor, William Harvey, in 1628. Harvey wrote a book entitled ‘Anatomical Essay on the Motion of the Heart and Blood in Animals’ in which he gave an accurate account of the mechanism of the circulatory system.

This false assumption prevailed until the academic world was surprised when an Egyptian physician proved that it was Ibn Al-Nafees who discovered the blood circulation. The Egyptian physician, Muhyid-Deen Al-Tataawi, proved this fact in his PhD thesis which he submitted for Freiberg University, Germany in 1343 A.H. (1924 A.C.) Al-Tataawi discovered this outstanding piece of information after he found a manuscript from Ibn Al-Nafees’ book ‘The Explanation of Anatomy in Al-Qanoon Book’ in the Berlin Library.

In this book, Ibn Al-Nafees, prior to William Harvey, provided a scientific description of the minor circulatory system. Al-Tataawi, with this discovery, astonished all his teachers and drew the attention of many scientists and researchers in the field. In the forefront of these scientists was the German Orientalist Mayer Hoove who worked as a resident physician in Egypt and spoke Arabic fluently. In 1931, he published a detailed treatise in which he confirmed the truth of this astonishing fact. Thus, after seven centuries, Ibn Al-Nafees regained his right once again.

Other contributions to medicine 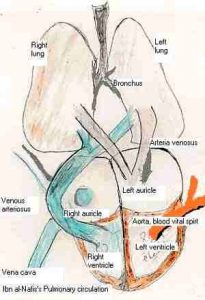 The discovery of the blood circulation system is one of the unique, unprecedented contributions of Ibn Al-Nafees to medicine. He was also the first physician to describe the arteries that carry blood to the heart muscle, although there is a common misconception among medical historians that a scientist named Stokes was the first to discover arteries. There is yet another unprecedented discovery by Ibn Al-Nafees that should not be ignored; he described the tiny capillaries that allow a constant interchange between the blood and waste products in the tissues.

Ibn Al-Nafees’ fame was not limited to medicine. He was one of the greatest scholars of his time in the Arabic language, philosophy, jurisprudence, and Prophetic Ahadith. He has many books in these fields such as:

– The Kaamiliyyah Treatise on the Prophetic Biography

– The Concise Book in the Fundamentals of Hadeeth Science

– The Way to Eloquence in Arabic grammar

In the field of medicine, he had many writings and contributions such as:

– The Abridged Book on the Experimented Kohl

– The Concise Book on Medicine

– The Explanation of Anatomy in Al-Qanoon Book (the Canon)

– The Comprehensive Book on the Medical Profession which is the greatest of Ibn Al-Nafees’ works and the largest medical encyclopedia is ever written by one person.

During his last days, Ibn Al-Nafees became seriously ill after he reached eighty years. He stayed in bed for six days. Some physicians advised him to drink some wine, claiming that he would recover. Ibn Al-Nafees refused to drink even a drop and said: I will not meet Allah (i.e. die) with a drop of wine in my stomach. He died on Friday the 21st of Thul-Qi’dah 687 A.H., the 17th of December 1288. Before his death, he made a will that all his possessions, money, books, and house should be allocated to the Mansoori Hospital as an endowment.