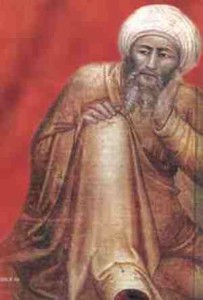 Medicine and the other applied sciences are a necessary and essential contribution to the well-being of humankind. Therefore, to work in them is fard kifaya, a collective obligation upon the community of Muslims as a whole.

The nervous system is the most complicated organ in the human body and its anatomy has only gradually become known over recent centuries. Nevertheless, Ibn Rushd was able to describe the brain, its membranes and the cranial nerves. He describes the smelling nerve perfectly, pointing out that it ends with a nipple like that of the breast. He does not consider this nerve as the primary one, giving that distinction to the optical nerve.

The first pair of nerves issue from the brain and form the sclera inside the cranium, then come out to the eyes each from its side. This is a wonderfully precise description. Ibn Rushd then describes the nerves that feed the muscles of the eye.

According to modern anatomy, these nerves are the third, fourth and sixth, but Ibn Rushd considers them all as the second pair that ramifies in the muscles of the eyes. He considers the third pair as related to the next (the fourth), and these feed areas of the face, the ear, the palate and the nose-in fact, he was writing about the fifth and seventh pair of nerves according to modern anatomy.

As for the fifth, Ibn Rushd says that a part of it leads to the ears and the muscles of the cheeks, whereas this is identified as part of the seventh pair. Ibn Rushd writes that the sixth nerve feeds the pharynx and the tongue and part of it leads to the muscles near and around the shoulder and another part deviates to the neck and a branch of that goes to the larynx.

This is actually the eleventh nerve (the accessory nerve) and there is some confusion in Ibn Rushd’s account with the description of the tenth nerve (vagus; the wandering or confused nerve).

Although he attributes many characteristics of the vagus nerve to the accessory one, Ibn Rushd is very accurate in the description of the characteristics themselves. He observes that some of the branches of this nerve lead to the chest and feed the heart, lungs, and esophagus; that it runs through the diaphragm and makes the link with the cardiac and liver membranes, the spleen and the rest of the intestines/bowels.

Ibn Rushd describes the seventh nerve as starting from the back of the brain and ramified in the tongue: he is describing accurately the twelfth nerve (hypoglossal). He describes as accurately as modern anatomy does, the nerves that go along the vertebrae. He mentions the eight pairs of cervical nerves, sixteen pairs of dorsal nerves, and five pairs of lumbar nerves.

He misses the correct number of the sacral nerves, they seemed only three to him because they are very closely attached-in fact they are five. Three nerves come from the bone of the coccyx and a single nerve comes out on the sides from the middle. This is absolutely accurate.

Ibn Rushd wrote; ‘The brain has two nipple-shaped appendices that grow from its two advanced abdomens (olfactory bulb). They reach the bone that resembles the cribrium (cribriform plate), which is perforated with many holes [i.e. like a sieve], not smooth but rough with its position in the cranium, where it reaches the end of the nose.’

It would be very hard to improve on the concision or accuracy of this account even today. About the membranes of the brain, he wrote, again with wonderful, inspiring accuracy: The brain has two membranes, one is hard and thick (dura mater), and the other is thin (pia mater), they cover the brain very closely and in some locations are completely joined. The thick one is adherent to the cranium. This membrane has many perforations in two places, the first at the canal at the end of the nose (cribriform plate), and the second at the bone of the palate. Under the brain on the thick cover, there is the mysterious net composed of veins that go up to the head.’

Ibn Rushd’s ability and competence as an anatomist is most clearly demonstrated in his description of the eye and its layers, which compares most favorably with what is known today except some minor differences in terminology.

Ibn Rushd combined accurate observation with brilliant exposition, sight with insight, presenting the structures of the eye as well as any twentieth-century expert could, and did so many centuries ahead of any physician in Europe.

He wrote: The eye is composed of seven layers and three liquid areas. The first, from the side of the cranium, is a membranous layer that develops from the thick layer (sclera). The next layer from outside develops from the thinner membrane of the brain; it is called al-mashima (choroid). The next is a layer similar to the net (retina). It grows from the same nerve that comes out of the brain. In the middle of this layer, there is a soft and liquid area called al-rutuba al-zujajiyya (vitreous humor). Inside it, there is another spherical body but with some minor flatness. It is as clear as the ice and called al-rutuba al-jalidiyya, and we call it nowadays al-`adasa (lens).’

Ibn Rushd continues this wonderful description, by mentioning al-rutuba al-ma’iyya al-amamiyya (aqueous humor), he also called it al-rutuba al-baydhiyya because its liquid is similar to the soft liquid egg-white: ‘On the outside of this liquid appears a soft body whose inner texture is velvet-like, that follows the al-rutuba of baydhiyya (aqueous humor); smooth from the outside its color is different from the body of the other, it can be very black or less dark or even blue.’ This is an extremely precise description of the iris (quzahiyyatu al-`ayn) and the ciliary body (al-jism al-hudhabi).

He adds: ‘Inside the ciliary body, next to the lens, a hole that widens and narrows depending on the extent of darkness that it needs, the hole is called hadaqa (pupil) and the membrane itself is called the inabiyya (grape- like) layer. ‘Next to this layer, a cover that has a hard and clear white and thin plate which is called al-qarniyya (cornea). It takes the color of the layer below it.

On the top of this rises a white body called al-multahim (conjunctiva).’ Ibn Rushd also wrote about the physiology of sight: ‘The sight is not a thing that comes out of the eye as Galinius used to think. The eye receives the colors through the reflecting objects in which they are held, in the same way as a mirror does.

Once the colors are reflected in the eye, the object is then conceived by the visioning power. ‘This could well be proved in natural science (physics). That is why any of those parts of the eye is able to reflect the colors because of its very glossy surface. So that body is the special tool to the lens and the advantage of the qarniyya (cornea) is . . . [that] it is made clear and thin so that it does not prevent the ice-like liquid (lens) from receiving the images.’

This is an accurate description of the eye and the physiology of sight that does not differ much from what we know today. From this brief dip into a chapter of al-Kulliyyat fi al-Tibb, we realize the importance of the work of Ibn Rushd – jurist, philosopher and physician. He was an expert in each of these fields and the most distinguished scholar in Spain and North Africa.

He neither experienced nor discovered any contradiction between his religion and his science; rather, his quest for knowledge and excellence, his wonderful curiosity, enlightened and improved his faith. His famous observation- who practices autopsy, his faith in God increases -should silence the false allegation that Muslims never practiced anatomy and that they are against applied sciences. What has been written by so many Muslims in all fields of knowledge refutes these allegations.

Medicine and the other applied sciences are a necessary and essential contribution to the well-being of humankind. Therefore, to work in them is fard kifaya, a collective obligation upon the community of Muslims as a whole, an obligation which some members of the community must undertake on behalf of the others who cannot. Islam is the guide for those who seek true and sound knowledge in every subject.

All sciences, so long as they are directed to God and not to merely worldly ends or personal glory, bring their students closer to God and make easier the way to approach and please Him: Those who fear God, amongst his servants, are those who have knowledge. And God is the Guide to the straight path.