The Impact of the Islamic Civilization (1/2) 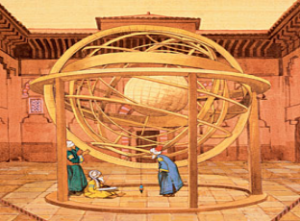 The lasting legacy of the Islamic civilization can be summed up under five main headings; we will be dealing with two of these main headings in this article and will tackle the rest in the forthcoming one.

1.  The Field of Religious Belief

The principles of the Islamic civilization had a profound impact on the religious reform movements that appeared in Europe from the 7th century until the age of the modern Renaissance. For Islam, which proclaimed the oneness of God and declared Him to be the only Sovereign, far removed from having any human attributes, performing any injustice, or having any shortcomings, and its declaration of man to be independent in his worship, his relationship with Him, and his understanding of His laws without any need for the mediation of the clergy, was a major factor in opening the minds of the people to these astounding principles. At that time people were suffering from violent sectarian disputes and having to submit their thoughts, opinions, wealth, and labor to the men of the cloth. So it was only natural that with the Islamic conquests spreading so far and wide from the east to the west, that neighboring nations would be influenced by Islam’s principles of belief above all else.

This is indeed what happened. In the 7th century there arose some westerners who denounced the worship of images; then came those who denounced the idea of having any intermediary between God and His worshippers, and who called for independent understanding of the Bible, far removed from the authority and supervision of the clergy. Many researchers have confirmed that in his reformation movement, Martin Luther was influenced by what he had read of the philosophy of the Arabs and Muslim scholars, and their views on religion, doctrine, and revelation. European universities during his time were still dependent on the books of Muslim philosophers that had been translated previously into Latin. We can be certain that the movements to separate church from state, which was proclaimed during the French Revolution, stemmed from the violent intellectual movements which had dominated Europe for three centuries of more, and which were sparked by our civilization through the Crusades and Andalusia.

2. The Field of Philosophy and Science, including Medicine, Mathematics, Chemistry, Geography, and Astronomy

Europe was awakened by the voice of our scholars and philosophers who taught these sciences in the mosques of Seville, Cordoba, Granada, and elsewhere. The first westerners to come to our schools were very impressed and excited by all that they heard of these sciences in an atmosphere of freedom, the like of which was unknown in their own countries. At the time when our scholars were speaking in their study circles and books of the rotation of the earth, its spherical shape, and the movements of the stars and heavenly bodies, the minds of Europeans were filled with myths and stories about all these matters. Then the Europeans started to translate works from Arabic to Latin, and the books of our scholars were studies in the western universities. Ibn Sina’s (Avicenna) book on medicine, al-Qānūn, was translated in the twelfth century, and ar-Razi’s (Rhases or Rhazes) book al-Ḥāwi – which was larger and more comprehensive than al-Qānūn – was translated at the end of the thirteenth century. These two books remained the basis for the teaching of medicine in the universities of Europe until the sixteenth century, but the books of philosophy continued to be the main reference for much longer. The west only knew of Greek philosophy via our writers and translators.

Hence many fair-minded Europeans acknowledge that during the Middle Ages, we were the teachers of Europe for no less than six hundred years. The scholar Gustave LeBon says, “The translation of the books of the Arabs, especially scientific books, remained virtually the only source of teaching in the universities of Europe for five to six centuries. We can say that the influence of the Arabs on some sciences such as medicine has lasted to this day. For the books of ibn Sina was still being expounded in Montpellier at the end of the last century.”

He also said, “Roger Bacon, Leonard Albeezi, Arnaud Filfofi, Ramon Paul, Saint Thomas, Albetus Magnus, and the Spaniard Alfonso the Tenth all relied solely on the books of the Arabs.”

The Orientalist scholar Sideo says, “The Arabs alone carried the banner of civilization in the Middle Ages and they defeated the barbarism of Europe which had been shaken by the incursions of the northern tribes. The Arabs drank from the enduring spring of Greek philosophy and, not content with what they had discovered of the Greek legacy, went on to expand it and add new topics to the study of nature.”

He also said, “When the Arabs practiced astronomy they paid a great deal of attention to all the mathematical sciences, and so they became proficient masters and were truly our teachers in this field.”

He also said, “When we study what the Latin took from the Arabs in the beginning, we find that Gerbert, who became Pope and took the name Sylvester II, introduced to us between the year 970 and 980 what he had learned of mathematics in Andalusia; Athelhard the Englishman travelled in Andalusia and Egypt from 1100 to 1128, and translated the Elements of Euclid from Arabic, a work which had been unknown in the west; Plato of Tivoli translated from Arabic the Spherics of Theodosius; Rudolf al-Birooji translated from Arabic The Geography of the Known World by Ptolemy; Leonard al-Beezi wrote around 1200 essays on Algebra, which he learned from the Arabs; Kanianus an-Nabari translated from Arabic ten books of Euclid in the thirteenth century, a good translation with commentary; Pole Witelo (Vitellius) translated al-Baṣariyāt by al-Ḥasan ibn al-Haytham (Alhazen) in the same century; Gerhard of Cremona spread knowledge of sound and correct astronomy in the same century with his translation of Almagest by Ptolemy and the commentary by Jabir (Geber), etc. In 1250 CE the Spaniard Alfonso ordered the publications of the astronomical tables that bear his name. Roger I encouraged the acquisition of Arabic science in Sicily, especially the books of al-Idrīsi, and the emperor Frederick II was no less keen to encourage study of the science and literature of the Arabs. The sons of ibn Rushd lived in the court of this emperor and taught him the history of plants and animals.”

Homeld says in his book on the universe, “It was the Arabs who for the first time invented the method of chemical preparations of medicines, and it was from this source that sound advice and procedure of experiments came to us, which were taken up by the School of Saliram and from there after a long time spread to southern Europe. The medicine and the natural elements on which medication entirely depends became the cause of study of plants’ chemistry. In this way both these studies went on simultaneously in two different ways and thus the door on a new era of the study of this science was opened by the Arabs. Suffice it for the proof of the vast Arab knowledge of the plant kingdom that they made addition of two thousand herbs to those of Zulefuredas. There were many herbs in their pharmacy that the Greeks had not even dreamt of.”

Sideo says of ar-Rāzi and ibn Sina that through their books they dominated the schools of the west for a long time. Ibn Sina was known in Europe as a doctor, and held absolute sway over their schools for approximately six centuries. His boosk al-Qānūn, which includes five sections, was translated and printed a number of times, because it formed the basis for study in the universities of France and Italy.

One thought on “The Impact of the Islamic Civilization (1/2)”