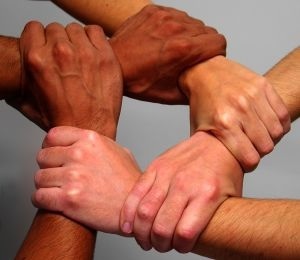 Regardless of race, sex, class status or color we are all one, according to Islam.

One of Islam’s most important characteristics is its humanity; this is highly evident in Islamic legislation and other facets of the religion.

Islam promotes the concept of a human brotherhood and the equality of all humans. It maintains that all humans are the children of one man (Adam) and one woman (Eve) and we all share the same lineage, as stated in the Qur’an:

“O people, fear your Lord, Who created you of a single soul, and from it created its mate, and from the pair of them scattered many men and women; and fear God by whom you claim [your rights] from one another and kinship ties. Surely God has been watchful over you.” (An-Nisa’ 4: 1)

Following his prayers, Prophet Muhammad (peace be upon him) used to say: “I am a witness that all people are brothers”.

Through this statement, he underscored the brotherhood that exists amongst all people – not only Arabs or Muslims. Regardless of race, sex, class status or color we are all one, according to Islam. Although we are, in essence, one – our humanity and freedom of choice has created divisions. There are those who choose to know and serve God, follow His path and abide by His laws, respecting all of God’s creation; these individuals are intent on gaining eternal happiness in this life and the afterlife.

And there are those who neglect God, slip away from His path and wrong God’s creatures; these individuals suffer miserably in this life and will experience more of the same in the afterlife. The human brotherhood is strengthened by the brotherhood of belief. Prophet Muhammad once said: “No one can be a good believer until he loves for his human brother all that he loves for himself.” (Al-Bukhari & Muslim)

The principle of equality is central to Islam`s sense of humanity. God says:

“O mankind! We have indeed created you from a male and a female, and made you nations and tribes that you may come to know one another. Truly the noblest of you in the sight of God is the most God-fearing among you. Truly God is Knower, Aware.” (Al-Hujurat  49: 13)

In his farewell speech to the pilgrims before his death, Prophet Muhammad addressed all Muslims in simple words stressing the fundamental principles of Islam saying: “O mankind, your God (Allah) is one and your father (Adam) is one, there is no favoring for any Arab over non-Arab nor for non-Arab over Arab, nor for black (skinned) over red (white skinned) except in God’s piety. O Mankind, God has declared inviolable to you each other’s blood, money and honor, therefore your blood, money and honor is inviolable to you till the day you meet Him. O mankind, take my advice and you shall be happy, don’t aggrieve, don’t treat unjustly. O mankind, the money of one is not lawful for another except with his own will and full satisfaction.”

Prophet Muhammad once stood up as the funeral procession of a Jewish man passed by, to show his respect. This act demonstrated his belief in the equality of all humans. His companions asked him why he stood up, he said: “Isn’t he a human (like us).”

It clearly states in Islam that whoever takes the life of another human, regardless of the status, creed, color, sex or age of the victim, it is as though he has taken the life of all mankind, conversely he who helps save another human is considered to have saved all of mankind.

“Because of that, We decreed for the Children of Israel that whoever slays a soul for other than a soul, or for corruption in the land, it shall be as if he had slain mankind altogether; and whoever saves the life of one, it shall be as if he had saved the life of all mankind. Our messengers have already come to them with clear proofs, but after that many of them still commit excesses in the land.” (Al-Ma’idah 5: 32)

Islam’s respect for the principle of human equality is evident in the Muslim pilgrimage, during which all Muslims, regardless of their differences wear the same white cloth. Whether they are kings, presidents, businessmen or just ordinary people they all call for unity, with one voice: “O God (Allah) here I am! At your service, here I am testifying your unity, here I am testifying that thanks and credit for everything good is for you only.”

One of the greatest examples of equality in Islam is the equality in punishment for all wrongdoers – whether they are relatives of the rulers or not, there is no difference in punishment. The second Muslims’ Caliph (Umar ibn Al-Khattab) addressed his entire family and relatives when he assumed power over all Muslim lands, saying: ”I have ordered the people with certain things and asked them not to do certain things, and as you know people are like flocks of birds, if they see you doing something they will do just like you, therefore don’t embarrass me and do what I have told the people not to do, otherwise I will double the punishment for you.”

Umar’s comments made it difficult to be a relative to the Caliph. The great principles of humanity and equality are part of the divine laws God sent, through his messengers, to support all mankind. When we choose to overlook or disregard these laws, we suffer. God said in the Qur’an:

“If they had observed the Torah and the Gospel and that which was revealed unto them from their Lord, they would surely have been nourished from above them and from beneath their feet. Among them there are people who are moderate, but many of them are of evil conduct.” (Al-Ma’idah 5: 66)

Taken with slight modifications from nabulsi.com.

Dr. Muhammad Ratib An-Nabulsi is a Muslim Syrian preacher and writer. He has written several Islamic books; foremost among which are: “Encyclopedia of the Beautiful Names of Allah,” “Encyclopedia of Scientific Miracles of the Qur’an and Prophetic Sunnah,” “Outlooks on Islam,” and “Contemplations on Islam.” He delivers a number of lessons, orations, symposiums and chat programs broadcasted on the Syrian, Arab, and Islamic radios and Televisions.