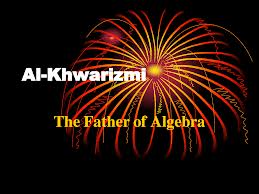 Muhammad ibn Musa al-Khwarizmi died in c. 850 being remembered as one of the most seminal scientific minds of early Islamic culture.

Al-Khwarizmi developed the concept of the algorithm in mathematics (which is a reason for his being called the grandfather of computer science by some people).

Al-Khwarizmi’s algebra is regarded as the foundation and cornerstone of the sciences. To al-Khwarizmi we owe the word “algebra,” from the title of his greatest mathematical work, Hisab al-Jabr wa-al-Muqabala. The book, which was twice translated into Latin, by both Gerard of Cremona and Robert of Chester in the 12th century, works out several hundred simple quadratic equations by analysis as well as by geometrical example. It also has substantial sections on methods of dividing up inheritances and surveying plots of land. It is largely concerned with methods for solving practical computational problems rather than algebra as the term is now understood.

Al-Khwarizmi confined his discussion to equations of the first and second degrees. He also wrote an important work on astronomy, covering calendars, calculating true positions of the sun, moon, and planets, tables of sines and tangents, spherical astronomy, astrological tables, parallax and eclipse calculations, and visibility of the moon. His astronomical work, Zij al-sindhind, is also based on the work of other scientists. As with the Algebra, its chief interest is as the earliest Arab work still in existence in Arabic.

His most recognized work as mentioned above and one that is so named after him is the mathematical concept Algorithm. The modern meaning of the word relates to a specific practice for solving a particular problem. Today, people use algorithms to do addition and long division, principles that are found in Al-Khwarizmi’s text written over 2000 years ago. Al-Khwarizmi was also responsible for introducing the Arabic numbers to the West, setting in motion a process that led to the use of the nine Arabic numerals, together with the zero sign.

Of great importance also was al-Khwarizmi’s contribution to medieval geography. He systematized and corrected Ptolemy’s research in geography, using his own original findings that are entitled as Surat al-Ard (The Shape of the Earth). The text exists in a manuscript; the maps have unfortunately not been preserved, although modern scholars have been able to reconstruct them from al-Khwarizmi’s descriptions. He supervised the work of 70 geographers to create a map of the then “known world”. When his work became known in Europe through Latin translations, his influence made a permanent mark on the development of science in the West.

Al-Khwarizmi made several important improvements to the theory and construction of sundials, which he inherited from his Indian and Hellenistic predecessors. He made tables for these instruments which considerably shortened the time needed to make specific calculations. His sundial was universal and could be observed from anywhere on the Earth. From then on, sundials were frequently placed on mosques to determine the time of prayer. The shadow square, an instrument used to determine the linear height of an object, in conjunction with the alidade for angular observations, was also invented by al-Khwarizmi in ninth-century Baghdad.

While his major contributions were the result of original research, he also did much to synthesize the existing knowledge in these fields from Greek, Indian, and other sources. A number of minor works were written by al-Khwarizmi on topics such as the astrolabe, on which he wrote on the Jewish calendar. He also wrote a political history containing horoscopes of prominent persons.

Muhammad ibn Musa al-Khwarizmi died in c. 850 being remembered as one of the most seminal scientific minds of early Islamic culture.