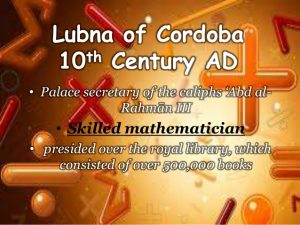 She excelled in writing, grammar, and poetry. Her knowledge of mathematics was also immense and she was proficient in other sciences as well.

The history of Muslims witnessed a plethora of outstanding figures that cannot be overlooked or ignored. Historians could not bypass the significance of one of those outstanding figures, namely Lubna of Crodoba who died in 984 AC.

She was a slave-girl of Spanish origin who later became one of the most influential figures in the Umayyad palace in Cordoba, Spain (known in the past as, Andalus or Andalusia).

She was promoted until she became the palace secretary of Caliph Abdul Rahman III (d. 961 AC) and his son Al-Hakam ibn Abdul Rahman who died in 976 AC. A list of roles that have been ascribed to her include: poet, copyist, scribe, royal library’s acquisitions expert, private secretary, and mathematician.

Her knowledge and skill as far as mathematics is concerned were of paramount standing. She was attested to as a great mathematician with marvelous mathematical skills. She headed the royal library which contained more than 500.000 books at that time and was one of the world’s biggest libraries in that time. Some sources state that Lubna was personally responsible for acquiring new items for the library, and that she travelled to Cairo, Damascus, and Baghdad to do so.

To quote the famous Andalusian scholar Ibn Bashkuwal, he said, “She [Lubna] excelled in writing, grammar, and poetry. Her knowledge of mathematics was also immense and she was proficient in other sciences as well. There were none in the Umayyad palace as noble as her.” She was  reported to have been so fond of mathematics indeed that she would teach children the principles of mathematics and the multiplication tables while walking in the roads and streets of Andalusia. It seems that she really enjoyed this very much!

Not only that, she was also a poet, a philosopher and a calligrapher. The legacy she left contains many beautiful works and pieces of calligraphy and the Islamic art thereof. We mentioned above that she was the Caliph’s secretary and scribe. As for her role as a scribe, she was not merely a writer and a translator, she was an annotator and commentator of the books she transcribed and/or translated. She was a real scholar with diverse knowledge and vast experience. She was responsible for the copying of many important texts including works by Euclid and Archimedes, as well as providing her own annotations to the already existing texts.

According to the great historian Ibn Bashkuwal, she “mastered the writing and science of poetry, and her knowledge of mathematics was broad and great, and she has mastered many other sciences and there was no one nobler then her in the Umayyad palace. She died in the year 984 AC.

According to Arab historians, in the time of Caliph Al-Hakam II, more than 170 literate women could be found in some suburbs of the city; these women were responsible for making copies of valuable manuscripts. This gives an idea of the culture and the role of Muslim women during the reign of Muslims in Spain that lasted for several centuries until they were persecuted and driven away by the Christians of the time.