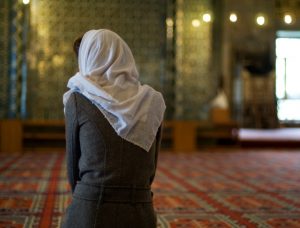 In fact, besides casual abortion, much of what feminists still fight for had already been sanctioned by Islam.

Many of the resurgent pre-Islamic cultural practices that have tragically come to be associated with Islam, such as forced marriages, female genital mutilation, bridal (as opposed to groom-paid) dowries, honor killings and the criminalization of rape victims, only resurfaced following the disruption caused by colonialism and the resulting disconnect between the common Muslims and their sources of knowledge.  It is always the learned scholars of Islam, men and women, who are the first victims of any imperialist purge.  Nevertheless, in light of the Quran and Sunnah, the veil of misinformation cloaking the true status of women in Islam is easily removed.  Moreover, Islam continues to grow faster than any other way of life with women, accounting for some 75% of all European and American reverts – ironic, given the widespread Western prejudice that ‘Islam oppresses women!

‘Westerners despairing of their own society – rising in crime, family breakdown, drugs and alcoholism – have come to admire the discipline and security of Islam.  Many converts are former Christians, disillusioned by the uncertainty of the church and unhappy with the concept of the Trinity and the deification of Jesus.’ (Lucy Berrington, “Why British women are turning to Islam”, Times, 9/11/93)

These women have acknowledged the same truth that led the Christian Negus of Abyssinia to embrace Islam following a speech in which the Companions informed him: ‘God’s Messenger forbade us to speak evil of women.’ (Ibn Hisham)

“Verily, those who slander chaste women; innocent unsuspecting believing women: they are cursed in this world and the next.  And for them will be a great torment.” (An-Nur 24:23)

Today, many nuns and devout women of the Orthodox, Catholic, Near Eastern and African churches still wear the Christian veil.  The Muslim woman too wears her hijab, declaring her faith in humility and servitude before God.  Only those given divine sanction – her immediate family and other believing women – may view her bodily beauty.  In effect, she is saying: ‘Judge me for my faith, not my body – I give you no other choice.’  When faithfully implemented, as it was by its earliest adherents, Islam offers women the freedom, dignity, justice and protection that have long remained out of their reach.  Mankind inherited from the Prophet a great Islamic tradition when he said: ‘The best of you (men) are those who best treat their women.’

While Christian women inherited a tradition of misogyny from both Jewish rabbinism and Greek thought.  It was Western woman’s reaction to this poor status afforded to her and to her ‘sexploitation’ that led to the rise of the feminist movement.

“The believing men and women are protectors of one another.  They enjoin the good and forbid the evil; they establish prayer and give alms (to the needy); and they obey God and His Messenger.  These, God will have mercy on them.  Lo!  God is Mighty, Wise.” (At-Tawbah 9:71)

Islam granted women contractual rights, conjugal rights, the right to inherit, to initiate divorce, to independently own and control wealth and property, to set up and run businesses, to earn and receive equal pay, to retain their maiden names, etc., over 1400 years ago while the democratic West granted similar rights only in the last 50 years of the 20th century!  In fact, besides casual abortion, much of what feminists still fight for had already been sanctioned by Islam.  Not to mention that Western-style emancipation – essentially women copying men – ­has not only imposed impossible demands on the weaker sex, but has also left womanhood without any intrinsic value.  As for the veiled Muslim celebrating her womanhood, she is but a reflection of chastity, humility and dignity, a mirror of her devotion to and belief in God – factors which liberate, not subjugate – and for this she can expect a great reward.