Teamwork in Islam: Living in a Muslim Team 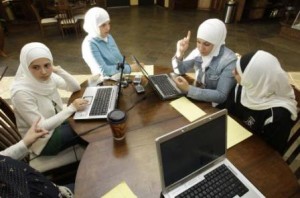 “No man is an island”; no Muslim can live as a hermit.

It is well known that, since the beginning of time, man is unable to live in isolation.

Even with all the beauties of Heaven, Adam was made a wife – Hawa’ (Eve) – for the sake of companionship – and this marked the formation of the first Muslim team on earth.

Both were brought down to populate the world and it was through their union that throngs of human beings exist today – many of them being appointed as Muslim communities, all living in their own “teams”.

Each community essentially – to a certain extent – a small group of believers who fought to have Islam established. This can be seen through the joint leadership of Moses and Aaron, the story of Dhul Qarnayn, the father-son relationship of Ibrahim and Ismail building the Ka`bah, and the precarious migration of the a handful of Muslims to Abyssinia, representing Islam in a Christian land.

Working together has always been important in Islam, and it makes sense, since it is close to impossible to survive on one’s own – and it falls upon all believers to honor this responsibility and hold on to the rope of God together.

Encouraging Teamwork for the Better

The strength of a thriving Muslim community lies in its unity. God says in the Noble Qur’an:

And hold fast all together by the rope which Allah (stretches out for you) and be not divided among yourselves; and remember with gratitude Allah’s favor on you; for ye were enemies and He joined your hearts in love so that by His grace ye became brethren; and ye were on the brink of the pit of fire and He saved you from it. Thus doth Allah make his signs clear to you: that ye may be guided. (Al `Imran 3:103)

A lot of good can come out of hanging on together and helping each other out in times of difficulties. This gets to collate the good in each Muslim and shun out the evil that may be therein. It also blocks out Satan the accursed and his devices, no matter in what form.
Prophet Muhammad (peace be upon him) was also stern about Muslims working together as a team. In a beautiful hadith, he once said:

“Faithful believers are to each other as the bricks of a wall, supporting and reinforcing each other. So saying, the Prophet Muhammad clasped his hands by interlocking his fingers.” (Al-Bukhari)

The interlocking device of our tiny limbs of our fingers represents how close believers can be to each other, without breaking apart, and how much stronger they can be, without allowing anything to fall through.

There are many examples of teamwork in Islam. One of the most important being the congregational prayers and the recitation of Al-Fatihah – where Muslims recite the chapter conscientiously as “we” or as one – following God’s Straight Path.

Similarly, `Umrah and Hajj, brings together a myriad of Muslims from all over the globe to come together for these important rites, no one being raised above another and all prostrating with their foreheads on the ground, one next to another.

The Concept of Shura in Islam

Islam has always looked highly upon leadership as the “head” of teamwork, reminding Muslims to select the best of leaders according to creed and leadership qualities and also to be good followers of such a leader. Being a good follower does not mean to follow blindly at every whim and fancy, but to be honored as part of the community and to play the important role in implementing rules and policies and, in general, being an honored and dignified member of the community. It is also important to endorse what is good and shun what is evil.

Criticizing leaders is also allowed, contrary to popular belief, as long as it’s also done in a dignified manner. In every leader there is only a human being, who in himself has his own flaws and fears, and is as human as anyone else, no matter how intelligent he is. Thus, a good follower is also someone who can help commandeer the leadership when he or she sees something amidst. This can be done without insults and violence, unless the leadership turns into stern oppression of its citizens.

This is where the Shura steps in. The Shura (consultation) is one of the Islamic principles of leadership in the faith, which instills brotherhood and also the fear of God. A leader, in a Shura situation, would be unable to reign freely and make decisions based on personal interest, as the Shura becomes his main consultative panel, comprising of learned men and representatives of all walks of life of the community and to help make daily decisions as a team. This way, disputes in society can be quickly elevated to the Shura in order to ensure that all persons are well taken care of and decisions again, are not made on solely one person.

It is well known that Prophet Muhammad used to consult his closest companions and also his wives in times of uncertainty and he himself had his own Shura during his time. Even though molded by the Quran, the Prophet still needed help from peers to ensure he was reaching out to the masses. This consultation is needed more by today’s leaders, who will never be as guided as Prophet Muhammad, as they will benefit from the ideas and advice of experts.

The binding of team work in a Shura is essentially check and balance. Everyone plays a role for the betterment of society and leadership is essentially a responsibility, not a luxury, as seen in many countries today. The Shura is there to help keep the leader on the right path and in between themselves too – to keep on the same route. Since the strength of Islam really rests on the brotherhood, a conscientious Shura will help all citizens of a given society fall into the right place.

Working in Teams, Bringing out the Best

Probably the best teamwork seen in Islamic history is the one between the Ansar and Muhajireen when the first few Muslims migrated from Makkah to Madinah in plight of a better life – and to be able to practice Islam in public.

Unknown to each other, both groups of men and women were united at the beginning of the first Muslim civilization and built the foundation of Islam from the grassroots. The Ansar were sharing their homes, their food, providing jobs to total strangers on the sole word of Prophet Muhammad that this was the right way of life; and the Muhajireen, putting their trust in God, followed the Prophet’s orders to migrate into unknown territory and start new lives out of the blue. The strongest band of Muslims soon followed – one that is hard to replicate until this very day.

Today we see Muslims working together for the sake of da`wah – in the West. There have been many Islamic initiatives to help respond to the misconceptions and misrepresentations of Islam, being a violent religion and a faith based on hate that propagates murder.

Actually, we see this all around the world, and it falls incumbent upon all Muslims to band together as brothers. Muslims in the UK for example have been opening doors for the homeless during Ramadan, hosting get-togethers with non-Muslims even before Ramadan, and participating in other forms of group activities that have brought them to be active participants in their communities. Channel 4 has this year been broadcasting the call to prayers throughout the month of Ramadan. This could only have happened with the strong presence and participation of Muslim brothers and sisters who wish to overturn stern misrepresentations about the faith.

No Muslim is a Hermit

Every Muslim should play an integrative role to help build the ummah in their community and the ummah as a whole. No one can live alone in isolation in a cave and expect Islam to thrive. All forms of worship require some form of teamwork – whether they are congregational prayers, providing iftar for others, paying zakah to those in need and even during the Hajj congregation. It’s important to remember that teamwork is a form of humility because Muslims are encouraged to bring out the best of each other and to shun evil at all times.

Working in teams has been a crucial need for Muslims and one that everyone needs to honor until this very day.