The Essence of Islam 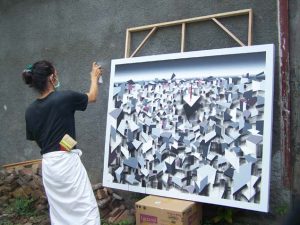 The Essence of Islam

What we know of Islamic art is usually connected to the elegant zest of calligraphy or the impressive and diverse beauty of Islamic architecture that ranges from the white marble monument of love – the Taj Mahal in India, to the world’s biggest mosque built of mud in Mali (Africa) that expresses the people’s love for Islam and Allah with every new layer of mud attached by hand in the annual repair ceremony.

The same love for Islam can be found in the abundance of Islamic calligraphy, which exists wherever there is Islam ranging from the Arab world to China and the Malay world. Peter Sanders expressed a similar deep affection for Islam in his exhibition “The Art of Integration: Islam in Britain” showing Islamic photography, held in established institutions all over the world, for example in the Museum for Islamic Art in Kuala Lumpur, Malaysia.

Expressing the Essence of Life

The Indonesian artist Askanadi communicates a comparable love for Islam and Allah in his abstract paintings. His early paintings were mainly black and white. However, his recent art also features colors. With his urge to capture Allah’s abundance of creation in his pure abstract style, Askanadi tries to express the very essence of life and therefore Islam in simplistic, yet sophisticated optical constructions on canvas.

Artists like Askanadi belong to a new generation of Muslim artists; artists that strives to discover the essence of Islam through meditative creativity. Both, the process of creation by the artist – here Askanadi, and the process of viewing and discovering one’s personal interpretation in his paintings are highly spiritual experiences.

The artist explains that for him facing the [empty] canvas is like entering a meditative state. The spiritual joy he feels during the creative process, he wants to transfer to the viewer. The Indonesian writer Puthut EA remarks on Askanadi’s paintings that the always same lines of black, white and gray shades remind the viewer of dhikr – the repeated chant of the confession of faith or one of the ninety-nine names of Allah. Every line in Askanadi’s paintings is a confession, a dua – a prayer and a constant reminder of the Creator.

Another characteristic of Askanadi’s art that makes us recognize it as Islamic art is the absence of figurativeness. Only simple geometric forms and symbols appear in his artworks.

The simplicity of the incorporated symbols that reveal individual messages to the audience have an astonishing profoundness. It is this simplicity found in Askanadi’s symbols and his choice of colours that reflect the essence of Islam. Characteristics like wasteful and extravagant, excessive and immoderate are not inherent attributes of Muslim people, who have gained enough conscious of the Islamic path.

Looking at Askanadi’s paintings we can find neither of those characteristics. His minimum use of colors other than black, white and a little red, his sporadic application of the same to achieve maximum quality reflects one of Islam’s highly valued features: moderation.

The neatness and exactness of every line, the carefully chosen compositions speak of another great Islamic quality: patience. Both qualities reflect a high level of self-control. It needs the artist’s personal conscious and understanding of Islam to be able to express these qualities in his artwork to be seen by other people.

The majority of Askanadi’s paintings carry personal messages. Depending on the viewer and his/her personal and spiritual background the message can vary greatly in interpretation. If confronted with this phenomenon Askanadi comments that it is really up to the audience to interpret his paintings because their feelings and interpretations do not influence his personal, spiritual and artistic freedom when creating his artworks. There is no right or wrong interpretation to his artwork, he claims, it all depends on the individual.

So if somebody only sees the optical aspect and his play with vision and illusions in his artworks without considering the spiritual background, Askanadi is not offended. Some of Askanadi’s paintings like the ones showing the Kabah or the Taj Mahal carry a common message to everybody because of the easy to recognize symbols used in those pieces, while the emotional and spiritual experience by the viewer surely varies depending on his/her personal history.

The symbolic meaning of the painting showing the Kabah for example, besides its abstractness, is so strong that even non-Muslim with a considerate educational background, recognize it instantly as the centre of Islam.

In his artwork “Inter-Text” Askanadi combines traditional Islamic calligraphy with his black and white optical illusions – a truly amazing effect and a powerful statement: Islam is today.

The Muslim background and spiritual experience by the artist never disappears from his canvas. It is that spirituality that moves our souls and that sets Askanadi’s paintings apart from other contemporary paintings, as new Muslim art. When being asked whom he idolizes among Indonesian or international famous artists, Askanadi answers convincing that he does not have any idols except the Prophet Muhammad, may peace be upon him.