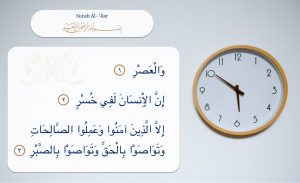 Many Muslims find it difficult to explain the whole of Islam in just a couple of hours or when creating a flyer.

Amazingly, the Qur’an sums up the complete system of Islam and the basic concept of faith in a few words. None other than Allah is capable of doing that, Glory be His.

Revelation and Significance of Surah Al-Asr

Surah Al-Asr was revealed in Makkah.

Though the Surah is very concise, Imam Ash-Shafi`i said, “If the people were to ponder on this Surah, it would be sufficient for them.”

He meant that it would be sufficient evidence for them and an adequate clarification of the lofty objectives of Islam, its pillars and etiquettes. He does not mean that the Surah encompasses all details of the Shari`ah of Islam in any way.

Surah Al-Asr, in one way or another, helped even a disbeliever to realize the falsehood of one of the biggest enemies of Islam, namely Musaylimah Al-Kadhdhab.

It is narrated that `Amr ibn Al-As before he accepted Islam, visited Musaylimah Al-Kadhdhab who asked him, “What has been revealed to your friend (Muhammad) during this time?”

`Amr said, “A short and concise Surah has been revealed to him.”

After `Amr read Surah Al-Asr to him, Musaylimah tried to imitate the Qur’an’s rhythm. What he produced were nonsensical verses where he claimed the Surah had been revealed to him instead.

`Amr said to him, “By Allah! Verily, you know that I know you are lying.” What Musaylimah fabricated was not even convincing to an idol-worshipper of that time.

The Overall Theme of Surah Al-Asr

Surah Al-Asr shows that the only way to salvation is with Allah, Glory be His. He decreed that all men are at loss. However, Allah exempted those who obtained these four traits or qualities.

Al-Asr: Time in which the movements of the children of Adam occur, whether good or evil. Or, the evening. However, the first opinion is most likely.

In this Surah, Allah swears by ‘Time’ in which all the deeds of man, be good or bad, will be either rewarded or punished in both this present life and the Hereafter.

Surah Al-Asr says that all men are losers except those who believe in Allah and whose hearts are filled with faith in Him and His Messenger and all that he brought forth with him.

It is well known that faith without good deeds is nothing but empty rhetoric and is deemed by Islam as ineffective or invalid.

Faith should be coupled with performing good deeds and in order for these deeds to be accepted by Allah, they must be done solely for His Sake and in accordance with His legislation.

The fourth quality is that they advise one another to be patient in adversity. Indeed, being patient is associated with one of the highest ranks in Islam. Patience is mentioned no less than 90 times in the Qur’an; a matter which sheds light on its importance.

If we ponder on these four traits, we will find them to be the means to salvation, success and winning in this present life and the Hereafter.

If any of these four qualities were to become defective and malfunction, everything would be upset and defective. Thereupon, faith without good deeds is defective. Similarly, faith which is coupled with good deeds but mutual counseling to follow the truth or to be patient in time of affliction is missing, boredom, weakness, and deficiencies would occur at all levels of the Muslim community.

Ibn `Abbas (May Allah be pleased with him) reported:

Messenger of Allah (PBUH) said, “There are two blessings in which many people incur loss. (They are) health and free time.” (Al-Bukhari).

Based on this hadith and Surah Al-Asr, it is clear that time is very precious in the sight of Islam. Being aware of the importance of time is a sign of one’s integrity, rational thinking, and complete faith. Many people kill time and waste it on nonsensical issues and in the end, they face much regret.

Amazingly, our great Muslim predecessors cherished time and never wasted it in trivialities or sheer play. They made the best use of time even though they were very busy with learning, teaching, authoring, and guiding others. That is why our Islamic history is filled with a number of encyclopedic scholars. And even though this type of scholar is rare these days, they are very much needed.

When we do these two things, we are then a productive Muslim who benefits not only ourselves but also our household, community, and the world at large.

Dr. Ali Al-Halawani is Assistant Professor of Linguistics and Translation Studies. He is an author, translator, and writer based in Canada. To date, Al-Halawani authored over 400 original articles on Islam and Muslims, most of which can be accessed on www.truth-seeker.info and other famous websites. He has recently started to self-publish his articles and new books, which are available on Amazon and Kindle. You can reach him at [email protected].