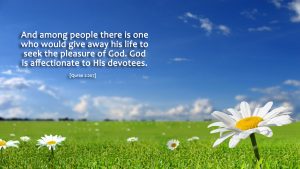 There are two choices a man can make; he can either found his life on God’s good pleasure, and thus earn the reward of His Paradise, or choose the path that leads to Hell

“Say: ‘I am commanded to worship God, making my religion sincerely His.’” (Al-Zumar: 11)

Once having grasped the extent of God’s infinite might, to forget His existence and remain heedless is merely to delude oneself. What God demands from human beings is that they seek to earn His good pleasure as their sole priority in life.

Since it is God Who created man, provided him his sustenance and all other such blessings, and Who promised him eternal life in the hereafter, it would be an act of ingratitude for man to seek the pleasure of others, or the gratification of his own self, as his primary aim. The punishment for such ungratefulness is eternal hellfire.

There are two choices a man can make; he can either found his life on God’s good pleasure, and thus earn the reward of His Paradise, or choose the path that leads to Hell. A third option is not available for him. This is clearly expressed in the following verse:

Those values praised in the Qur’an are those founded on purely that which achieves God’s pleasure. For example, self-sacrifice, which is pleasing to God, is valid only if the person does not expect anything for it in return, but rather only to attain God’s good pleasure. It is related in the Qur’an that believers conduct themselves correctly only to seek God’s countenance:

“They give food, despite their love for it, to the poor and orphans and captives: ‘We feed you only out of desire for the Face of God. We do not want any repayment from you or any thanks.’” (Al-Insan: 8-9)

God’s Messenger, the Prophet Muhammad (PBUH) also stated in a hadith that God’s Pleasure must always be held above man’s pleasure:

The greatest honor and gratification man can ever attain is God’s good pleasure. God makes His servants pleased with Him through the multitude of blessings He bestows on them. In a verse of the Qur’an, the reward for believers who are pleased with God, and with whom God is pleased, is related as follows:

“Their reward is with their Lord: Gardens of Eden with rivers flowing under them, remaining in them timelessly, forever and ever. God is pleased with them and they are pleased with Him. That is for those who fear their Lord.” (Al-Bayyinah: 8)

God’s good pleasure is not only earned solely by performing certain acts of worship at definite times. God’s good pleasure is also earned by conducting oneself correctly throughout one’s lifetime. The following verse informs us that a believer’s entire life must be oriented towards a single goal: