Belief in the Resurrection 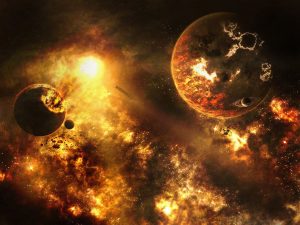 It is God Who first created man out of nothing, and therefore, certainly has the power to bring him back to life again.

Belief in the Resurrection

“He makes likenesses of Us and forgets his own creation, saying, “Who will give life to bones when they are decayed?” Say “He Who made them in the first place will bring them back to life.” (Ya-Sin: 78-79)

The resurrection is a re-creation of life after death. Death is not the cessation of existence. The world, which God has created to put man to test, will serve to determine his lot in the afterlife. After death, every soul will be re-created in a new body, and begin its life in the hereafter, where God will place him either in Hell or Paradise, depending on his deeds in the world. The resurrection of humanity is easy to accomplish for God. In a verse, the rising of the people all together on the Day of Judgement is described as follows:

“It is We Who give life and cause to die and We are their final destination. The Day the earth splits open all around them as they come rushing forth, that is a gathering, easy for Us to accomplish.” (Qaf: 43-44)

Some people doubt that God could raise man from the dead. However, it is God Who first created man out of nothing, and therefore, certainly has the power to bring him back to life again. God informs us of this fact in the Qur’an:

“Mankind! If you are in any doubt about the Rising, know that We created you from dust then from a drop of sperm then from a clot of blood then from a lump of flesh, formed yet unformed, so We may make things clear to you. We make whatever We want stay in the womb until a specified time and then We bring you out as children so that you can reach your full maturity. Some of you die and some of you revert to the lowest form of life so that, after having knowledge, they then know nothing at all. And you see the earth dead and barren; then when We send down water onto it, it quivers and swells and sprouts with luxuriant plants of every kind. That is because God is the Real and gives life to the dead and has power over all things.” (Al-Hajj: 5-6)

To make an example of this re-creation, God draws our attention to natural phenomena around us. After rainfall, God revives dead, barren soil where nothing could grow so that it becomes productive again. Similarly, bringing man back to life after his death is easy for God:

“It He is Who sends out the winds, bringing advance news of His mercy, so that when they have lifted up the heavy clouds, We dispatch them to a dead land and send down water to it, by means of which We bring forth all kinds of fruit. In the same way We will bring forth the dead, so that hopefully you will pay heed.” (Al-A’raf: 57)

Everything is easy for God. The Qur’an states that the creation or resurrection of humanity is like that of a single person:

“Your creation and rising is only like that of a single self. God is All-Hearing, All-Seeing.” (Luqman: 28)