Between Paul and Jesus Christ

By Laurence B. Brown, MD 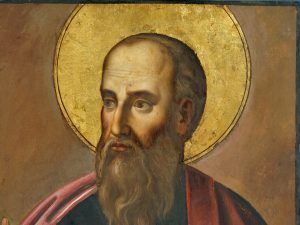 Many authors have pointed out the disparity in the teachings of Paul and Jesus; the best of them have avoided opinionated commentary and concentrated on simply exposing the elements of difference.

In the midst of the growing 19th and 20th-century awareness of the differences between Trinitarian doctrine and the period of origins, a person might be surprised to find one group who claim to be followers of Christ Jesus reading the following in the Noble Qur’an:

“O People of the Book! Commit no excesses in your religion: nor say of God anything but the truth. Christ Jesus the son of Mary was (no more than) a Messenger of God, and His Word, which He bestowed on Mary, and a Spirit proceeding from Him: so believe in God and His Messengers. Do not say “Trinity”: desist: it will be better for you: for God is One God: glory be to Him: (far Exalted is He) above having a son. To Him belong all things in the heavens and on earth. And enough is God as a Disposer of affairs” (Al-Nisa’ 4:171)

“O People of the Book! Exceed not in your religion the bounds (of what is proper), trespassing beyond the truth, nor follow the vain desires of people who went wrong in times gone by – who misled many, and strayed (themselves) from the even Way.” (Al-Ma’idah 5:77)

One may wonder what, from the New Testament, separates these two groups by such a vast expanse of understanding. No doubt the key difference which divides Trinitarians from Unitarians, and Christians from Muslims, is Pauline theology. For centuries the argument has been put forth that Trinitarian Christians largely follow Pauline theology more than that of Jesus. This charge is difficult to deny, for Jesus taught the Law of the Old Testament, whereas Paul preached mysteries of faith, in denial of the Law which the prophets had suffered and struggled to convey. In disrespect to thousands of years of revelation conveyed through a long chain of esteemed prophets, and contrary to the teachings of the rabbi Jesus himself, Paul focused not on the life and teachings of Jesus, but upon his death. As Lehmann put it:

“The only thing which Paul considers important is the Jew Jesus’ death, which destroyed all hopes of liberation by a Messiah. He makes the victorious Christ out of the failed Jewish Messiah, the living out of the dead, the son of God out of the son of man.”[1]

More than a few scholars consider Paul the main corrupter of Apostolic Christianity and of the teachings of Jesus:

“What Paul proclaimed as ‘Christianity’ was sheer heresy which could not be based on the Jewish or Essene faith, or on the teaching of Rabbi Jesus. But, as Schonfield says, ‘The Pauline heresy became the foundation of Christian orthodoxy and the legitimate church was disowned as heretical.’”[2]

“Paul did something that Rabbi Jesus never did and refused to do. He extended God’s promise of salvation to the Gentiles; he abolished the law of Moses, and he prevented direct access to God by introducing an intermediary.”[3]

Others elevate Paul to sainthood. Joel Carmichael, who commented as follows, very clearly is not one of them:

“We are a universe away from Jesus. If Jesus came “only to fulfill” the Law and the Prophets; If he thought that “not an iota, not a dot” would “pass from the Law,” that the cardinal commandment was “Hear, O Israel, the Lord Our God, the Lord is one,” and that “no one was good but God”….What would he have thought of Paul’s handiwork! Paul’s triumph meant the final obliteration of the historic Jesus; he comes to us embalmed in Christianity like a fly in amber.”[4]

Many authors have pointed out the disparity in the teachings of Paul and Jesus; the best of them have avoided opinionated commentary and concentrated on simply exposing the elements of difference. Dr. Wrede comments:

“In Paul the central point is a divine act, in history but transcending history, or a complex of such acts, which impart to all mankind a ready-made salvation. Whoever believes in these divine acts – the incarnation, death, and resurrection of a celestial being, receives salvation.

“And this, which to Paul is the sum of religion – the skeleton of the fabric of his piety, without which it would collapse – can this be a continuation or a remoulding of the gospel of Jesus? Where, in all this, is that gospel to be found, which Paul is said to have understood?

“Of that which is to Paul all and everything, how much does Jesus know? Nothing whatever.”[5]

“Hence the faith in Christ as held by the primitive churches and by Paul was something new in comparison with the preaching of Jesus; it was a new type of religion.”[6]

Which theology won the day, and why, and how, are questions left to the analyses of the above authors. Should a person come to recognize that the teachings of Paul and those of Jesus oppose one another, consideration should be given to the question: “If I had to choose between the two, to whom should I give priority — Jesus or Paul?” The question is so relevant that Michael Hart had the following to say in his scholastic tome, in which he ranks the 100 most influential men of history:

“Although Jesus was responsible for the main ethical and moral precepts of Christianity (insofar as these differed from Judaism), St. Paul was the main developer of Christian theology, its principal proselytizer, and the author of a large portion of the New Testament.”[7]

With regard to Paul’s perspective:

“He does not ask what led to Jesus’ death, he only sees what it means to him personally. He turns a man who summoned people to reconciliation with God into the savior. He turns an orthodox Jewish movement into a universal religion which ultimately clashed with Judaism.”[8]

The three main points where Pauline theology conflicts with that of Jesus are critical — elements so crucial that deviation from the truth threatens a person’s salvation. In order of importance they rank:

1) The divinity of Jesus alleged by Pauline theology versus the oneness of God taught by Christ Jesus;

2) Justification by faith, as proposed by Paul, versus Old Testament law, as endorsed by Christ Jesus;

3) Jesus having been a universal prophet, as per Paul, versus an ethnic prophet, as per the teachings of Christ Jesus.[9] Interestingly enough, these three points constitute the greatest doctrinal differences separating Christianity not only from Judaism, but also from Islam. Running a theological finger down the backbone of revealed monotheism, Trinitarian Christianity seems to stand out of joint.

To address the first of these points, Jesus is recorded as having taught the oneness of God, as in Mark 12:29:

“Jesus answered him, ‘The first of all the commandments is: “Hear, O Israel, the Lord our God, the Lord is one.” Jesus reportedly continued with “And you shall love the Lord your God with all your heart, with all your soul, with all your mind, and with all your strength,” finishing with emphasis upon the initial claim, “This is the first commandment.” (Mark 12:30). Not only did Jesus stress importance by sandwiching his statement between the repeated and emphatic “This is the first commandment,” but the importance of this teaching is equally stressed in Matthew 22:37 and Luke 10:27, and further complemented by the first commandment as recorded in Exodus 20:3 — “You shall have no other gods before Me.” Jesus conveyed the above teaching from Deuteronomy 6:4-5 (as acknowledged in all reputable Biblical commentaries), yet Pauline theology somehow arrived at concepts which have been extrapolated to support what is now known as the Trinity. One wonders how. Jesus referred to the Old Testament — what did the Pauline theologians refer to? Significantly absent from the above teaching of Jesus is the association of himself with God. There never was a better time or place, throughout the New Testament, for Jesus to have claimed partnership in divinity, were it true. But he didn’t. He didn’t say, “Hear, O Israel, the Lord our God, the Lord is one — but it’s not quite that simple, so let me explain…”

The above excerpt is taken from Dr. Brown’s forthcoming book, MisGod’ed, which is expected to be published along with its sequel, God’ed. Both books can be viewed on Dr. Brown’s website, www.LevelTruth.com. Dr. Brown can be contacted at [email protected]

[9] Christ Jesus was one more prophet in the long line of prophets sent to guide the astray Israelites. As Christ Jesus so clearly affirmed, “I was not sent except to the lost sheep of the house of Israel.” (Matthew 15:24) When Jesus sent the disciples out in the path of God, he instructed them in such a manner as to leave no uncertainty in this regard, for he told them, “Do not go into the way of the Gentiles and do not enter a city of the Samaritans. But go rather to the lost sheep of the house of Israel.” (Matthew 10:5-6) Throughout his ministry, Jesus was never recorded as having converted a single Gentile, and in fact is recorded as having initially rebuked a Gentile for seeking his favors, likening her to a dog (Matthew 15:22-28 and Mark 7:25-30). One wonders, what does that mean now, for those who have taken Jesus to be their ‘personal savior’ and presume to speak in his name?