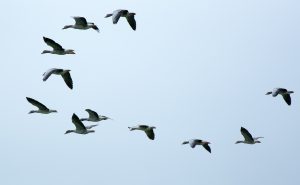 Had it been possible for each bird to carry a fourth stone to implement Allah’s ordinance, it would have willingly and wholeheartedly done so.

Describing the Noble Qur’an, Imam Abu Hamid Al-Ghazali (AH 450–505) said, “It is the all-inclusive ocean that contains all sorts of jewels and pearls, and one should exert oneself if one wants to find them.” Indeed, the Qur’an is a perfect book, in both style and guidance, and it contains nothing but the truth, as unanimously described by the scholars throughout the centuries. Muslims believe that the Qur’an is Islam’s eternal miracle whose inimitability is uninterruptedly confirmed through scientific research. They also believe that it was revealed by Almighty Allah to Prophet Muhammad (peace and blessings be upon him) to bring the humankind out of darkness into light.

Any one who looks at the status of the Muslim Ummah nowadays will surely find out how much it is humiliated and oppressed by its enemies. Countless people try to find out a solution to this derogatory situation. Trying to find out this solution through other ways than the Book of Allah is merely a waste of time and effort. Muslims should seek a cure for their maladies in their Divine Book, and they should do all they can to implement what they find in it.

Thereupon, if Muslims want, for example, to set Al-Aqsa Mosque free from the hands of the Jews, they must go back to the Ever-Glorious Qur’an, understand the Qur’anic instructions and guidance of relevance, and start implementing them instantly.

An example of the unlimitedness of the provisions of the Qur’anic text is Surat Al-Fil (Arabic for the elephant). When I read this surah, three meanings come to my mind. These three meanings can be outlined in the following points.

It is reported in the books of tafseer (explanation of the Qur’an) that Abrahah, the King of Yemen, determined to destroy the Ka`bah after a man from the Quraish tribe relieved himself in the church built by Abrahah, in a way that desecrated it. Originally, Abrahah built that church to lure the Arabs into pilgrimage there, just as they used to perform pilgrimage at the Ka`bah in Makkah. Being narrated in most of the books of tafseer, this latter account is most probably the correct one. However, arguably, there might be another reason behind Abrahah’s attempt to destroy the Ka`bah. It makes sense that he, as one of the learned persons of the People of the Book at that time, knew very well the date of Prophet Muhammad’s birth. Hence, he came to Makkah with the intention of destroying the Ka`bah, as well as killing all the Makkan newborns to nip the religion of Islam in the bud.

Regarding the prior knowledge of the People of the Book of Prophet Muhammad’s birth and its time the Qur’an says,

“The people of the Book know this as they know their own sons; but some of them conceal the truth which they themselves know.” (Al-Baqarah 2: 146)

Some commentators on the Qur’an say that they perfectly knew the signs that would appear at the time of his birth.

This was probably Abrahah’s untold drive. In fact, it is hard to believe that Abrahah’s desire to demolish the Sacred House was based on the story saying that someone had allegedly soiled a building with dirt.

In the same vein, in today’s world, it is difficult to understand the logic behind conquering a whole country such as Afghanistan and killing thousands of its inhabitants just because around 20 people were allegedly responsible for destroying the World Trade Center in the United States of America!

This also brings to mind the pretext that the former US administration used to justify its invasion of Iraq back in 2003. They said their main goal was to destroy Iraq’s weapons of mass destruction (WMD), which turned out to be a hoax, as was admitted by the same US administration. One tends to believe that there was a hidden or untold reason for that too: Behind the lies about the Iraqi WMD, the real goal of this vicious offensive was to destroy the potentials and hinder the progress of a Muslim nation that could have — as claimed by the West — posed a threat to others.

The second meaning that usually crosses one’s mind when reading this surah is the fact that Almighty Allah sent mere flocks of birds to destroy Abrahah’s army and protect His Sacred House. This incident took place in the year Prophet Muhammad was born.

At that time, the pagans of Quraish were there, and Allah could otherwise use them to protect His Sacred House. However, one tends to believe that Allah did not want the Quraish tribe to have any role in protecting His Sacred House because of their disbelief and polytheism.

Also, with the commission of Muhammad as Prophet and the revelation of the divine message of Islam, the duty of protecting Allah’s sanctities moved from these nonhuman soldiers (i.e., the birds) to Prophet Muhammad and his Ummah until the end of time.

It is a fact that if Muslims possess enough spiritual and material powers, they will be able — with the help of Almighty Allah — to protect their sacred places against any aggressor, and if they do not, they will not.

Many scholars maintain that Al-Aqsa Mosque’s situation is and has always been an indicator of the condition and status of Muslims. When it is in the hands of Muslims, this gives a positive indication regarding their power, dignity, and adherence to their faith, and vice versa. Therefore, if Muslims choose to sit idly and wait for Almighty Allah to send down flocks of birds to free the mosque, they will not benefit from their mere waiting in any way.

Unless Muslims perfectly believe in Almighty Allah, possess the necessary spiritual and material powers, and leave no stone unturned in this regard, they will never be able to protect their sacred places or restore Al-Aqsa Mosque to their fold.

This lesson is derived from the conduct of the flocks of birds mentioned in Surat Al-Fil. Each bird was carrying three small stones: two stones with its feet and one in its beak. In that way, the birds exerted themselves and did all in their power to defend the Sacred House.

Had it been possible for each bird to carry a fourth stone to implement Allah’s ordinance, it would have willingly and wholeheartedly done so. Having done all they could, the flocks of birds were not to be blamed if they had failed to accomplish their task, for success is in the hands of Almighty Allah alone.

The blame, however, falls on the ones who do not do their best and yet still expect to succeed. Now, a simple question arises: Do we all exert our utmost efforts in doing what is required of us to restore the glory of our Ummah and keep up the supremacy of our religion? Our answer to this question should definitely be practical and void of empty rhetoric.