The Civilized Lives of the Believers 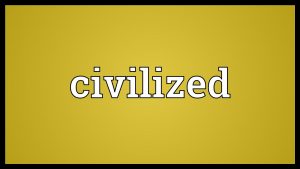 Throughout history, believers who have lived with the prophets have enjoyed high-quality lives under very civilized conditions.

The Civilized Lives of the Believers

Throughout the course of history, God has sent messengers to call people to the true path. Some people have obeyed these messengers and believed in the existence and oneness of God, while others have persisted in denial. Ever since humans first came into existence they have learned faith in the one and only God, and the moral values of the true religion, by

of our Lord’s revelations. Therefore, the evolutionist claim that earliest societies did not believe in the One and Only God is untrue.

The Qur’an reveals how, in all periods of history, God has sent messengers to call people to believe and live by religious moral values:

“Humanity was a single community. Then God sent out prophets bringing good news and giving warning, and with them He sent down the Book with truth to decide between people regarding their differences. Only those who were given it differed about it, after the clear signs had come to them, envying one another. Then, by His permission, God guided those who believed to the truth of that about which they had differed. God guides whoever He wills to a straight path.” (Al-Baqarah, 2:213)

Another verse reveals that a messenger has been sent to every society to warn its members, remind them of the existence and oneness of God, and to call them to abide by religious virtues:

Although our Lord has sent people messengers and sacred scriptures, some have fallen into misunderstanding, turned their backs on the virtues of the true religion and adopted deviant superstitious beliefs. Some have developed pagan beliefs and fallen into the perversion of worshiping the earth, stone, wood, the Moon or the Sun, and even so-called evil spirits. Even today, along with believers in the true religion, there are also some who worship fire, the Moon, the Sun or idols made of wood.

Some people ascribed partners to our Lord, even though they were fully aware of His existence and uniqueness. Yet still, our Lord has sent them messengers, revealed to them the errors they had fallen into and called on them to abandon their superstitious beliefs and live according to the true religion. And in all periods in history, there have been believers and unbelievers, those with pure faith and those who have gone down paths of perversion.

Throughout history, believers who have lived with the prophets have enjoyed high-quality lives under very civilized conditions. They lived within a sophisticated social order in the days of the Prophets Noah, Abraham, Joseph, Moses and Solomon (peace be upon them all), just as they do today. In all ages, believers have prayed, fasted, heeded the bounds set by God, and lived clean and lawful lives. Archaeological findings reveal the best, noblest and cleanest standards of living from those possessed by devout believers in God. The prophets and true believers used the finest means available in their times, in a manner appropriate to His approval.

All technological progress in the time of Nimrud was used in the best way by Prophet Abraham (pbuh) and those who believed with him. Technical knowledge in the time of Pharaoh was used in the service of Prophets Joseph, Moses, Aaron (peace be upon them all) and true believers of that time. The high level of technology attained in the fields of architecture, art and communications in the time of Prophet Solomon (pbuh) was employed in the wisest manner. The wealth and magnificence that our Lord bestowed as a blessing on Prophet Solomon (pbuh) inspired awe down the generations.

People who study the sub-atomic particles today, who send shuttles into space and who write computer software do so because God so wills. All the information that human beings have possessed since they were first created is a blessing from God, and every civilization they have founded is equally the work of our Lord.

God created man out of nothing and gives him various tests and blessings throughout his life in this world. Every blessing bestowed is also a test. People who know that the civilization, technology and means they possess are actually all blessings from God give thanks to our Lord, Who increases His blessings on them:

“And when your Lord announced: “If you are grateful, I will certainly give you increase…” (Ibrahim, 14:7)

God causes His devout servants to enjoy pleasant lives both in this world and in the Hereafter. This is revealed in the Qur’an:

“Anyone who acts rightly, male or female, being a believer, We will give them a good life and We will recompense them according to the best of what they did.” (Al-Nahl, 16:97)

As a manifestation of this verse, all Muslims throughout history have possessed the finest means of the age they lived in, and have led pleasant lives. Naturally, some have been tested with difficulty and troubles, but this does not suggest that they lived under difficult, primitive conditions and did not live civilized, humane lives.

No matter how wealthy, comfortable and advanced their civilizations might have been, those who have denied God and persisted in their denial, who failed to live by proper moral values and brought about corruption on Earth, have always ended up disappointed. In addition, many of them have perhaps enjoyed more advanced technologies than those of present-day societies. This is also revealed in the Qur’an:

“Haven’t they traveled in the Earth and seen the final fate of those before them? They had greater strength than them and cultivated the land and inhabited it in far greater numbers than they do. Their messengers also came to them with the clear signs. God would never have wronged them; but they wronged themselves.” (Al-Rum, 30:9)